During one of the first scenes of Episode One, The Fireman tells Agent Cooper to remember “430” and “Richard and Linda.” One would assume that Richard refers to Richard Horne, but who the frak is Linda? We wouldn’t discover anything more about this until the beginning of the final episode of the new series. As we all of course now know, Richard is Dale Cooper, and Linda is Diane Evans, although somewhat changed.

After Dale led Laura Palmer away through the woods, before she had a chance to run off into a certain fate of murder, he re-entered The Lodge to find Diane. I’m not sure if this is the pre-Naido Diane, or the post-Nadio Diane. The Lodge exists outside of time, so these things are never really for certain. They then drive together to the predetermined 430 miles. Cooper and Diane had to have left The Lodge in 1989 based upon the seat design of the car. This would have been on the cusp of a now-changing timeline. It is my guess that when the two of them meet the 430 mile mark, that that would mean that the changed timeline would now be permanent, and certain things would be vastly different. That also seems to include identities and personalities, at least to a certain extent.

During the original series, after Cooper had been shot, he mentions in the microcassette recorder to Diane that among other things, he wishes to make love to a woman that he is in love with before he dies. When the two of them reach the small motel, they do just that. They make love. So many questions that fans have had throughout the years regarding Diane, and Cooper’s relationship with her, have led to this moment. In a way, a story arc is now complete. When Cooper wakes up, she is gone. She doesn’t recognize him anymore, and they are totally different people. “Overnight,” the change has become permanent. Everything in the world is now different. The bedsheets are different. The lamp is different. The room is different. Cooper is no longer at a motel. He has now been upgraded to a hotel. Cooper isn’t even Cooper anymore. He is now Richard and needless to say, Diane is now Linda. When Cooper entered the motel, it was Room Seven. When Richard emerged from the hotel, I couldn’t even read the room number.

Cooper then enters a totally different and modern car. We don’t know where he’s driving, and it seems like neither does he. He spots a cafe called “Judy’s,” but we’re not gonna talk about that. In fact, we’re gonna leave that place out of this. I lied. We are gonna talk about Judy. As I mentioned in the last report, Judy is actually an “ancient” spirit called Jiào Dé. Jiào Dé is likely the same spirit that gave birth to the vile entity referred to as Bob. Judy’s restaurant would then be a kind of enslavement camp, where the souls that she (it) controlled and/or possessed are contained. Richard is now the emancipator of such souls, and now must search for the soul formerly known as Laura Palmer. First he must battle three demons that appear in the form of unruly rednecks. Not really much of a problem for a soul as strong as “Richard.” I have to admit that dropping the three handguns into a deep-fryer was a nice touch. Typical of Cooper (I mean Richard) to warn the short-order cook that the oil may or may not be hot enough to ignite the no-doubt several bullets. He then kindly demands certain information from the only waitress in Jiào Dé’s Odessa-located establishment.

The life that “Laura Palmer” now leads is a somewhat backwards version of the much shorter life she led in the original timeline. The generic television accent is now replaced by a redneck accent. A dead body just sits there in the living room of her rundown house, as if this were a completely normal occurrence. These things just happen if you happen to be a person that used to be Laura Palmer in a now-changed reality. Richard isn’t even concerned about the corpse. Cooper’s mission as Richard no longer involves solving any kind of murders. His only path now is to ensure the safety of woman he believes to be Laura Palmer. Whatever happens after her scream will involve the both of them. Their destinies are now forever intertwined. He now has to protect her. Remember, Bob was destroyed in the OTHER reality. The life of “Carrie Page” is clearly a tormented mess, to say the least. The entity known as Bob, and subsequently, Jiào Dé, are clearly in control of her life. Her scream after she hears her mother call her name utterly confirms this. In a way, this is a happy ending. Though she is tormented, she now has “Richard” to protect her. Perfect. 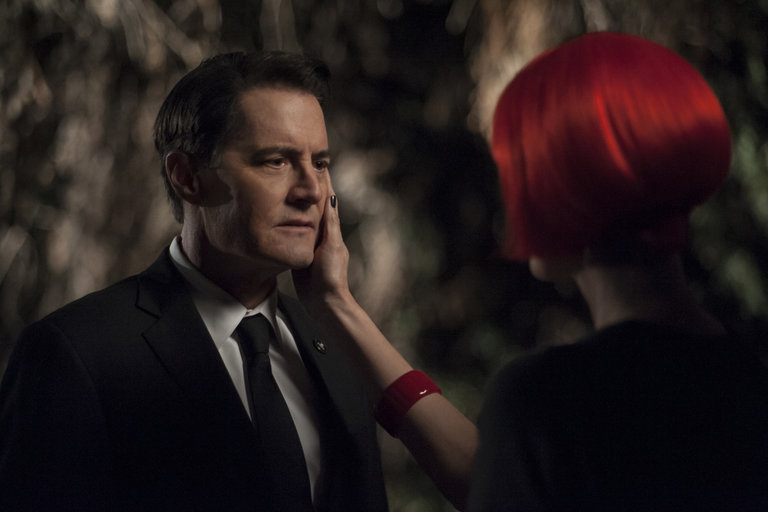