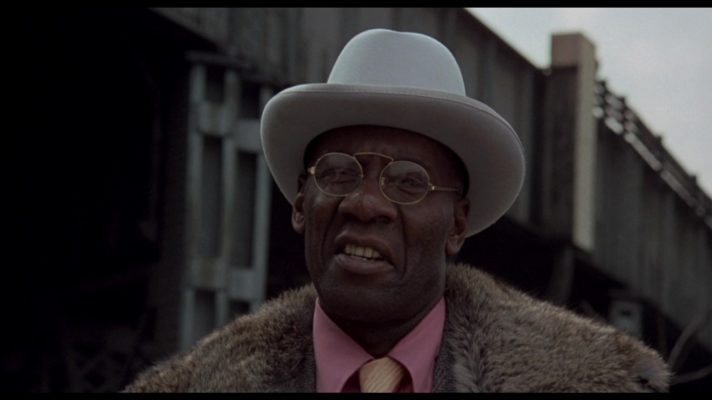 Evolving from his cameo as the disappointing father of gangster Tommy Gibbs (Fred Williamson) in BLACK CAESAR to his son’s cold-blooded right hand man in the sequel HELL UP IN HARLEM, Papa Gibbs (Julius Harris) gets an interesting character arc in the otherwise unnecessary follow-up. Harris brings gravitas to the figure of a relatively decent man who becomes corrupted by crime in an effort to make things right with the son he abandoned years before. His story is a classically tragic morality play (much like Tommy’s in the first film) that nearly makes the otherwise slapdash cash-in sequel worthwhile.

His feature directorial debut, BONE features one of the first examples of Cohen’s use of the kind of casually bizarre people most of us have stories about encountering more than once in our lives to spice up and add some texture to a transitional scene. The X-Ray Lady (Brett Somers) may just be a kooky drunk hanging out at a bar, but her absurd tale of how her late husband committed suicide by visiting different dentists over and over to get full mouth X-Rays until he got cancer is darkly funny and serves as a bracing reminder to one of the main trio of leading characters (and the audience) that you have no real idea what is going on in the head of someone else—even when you’re married to them. 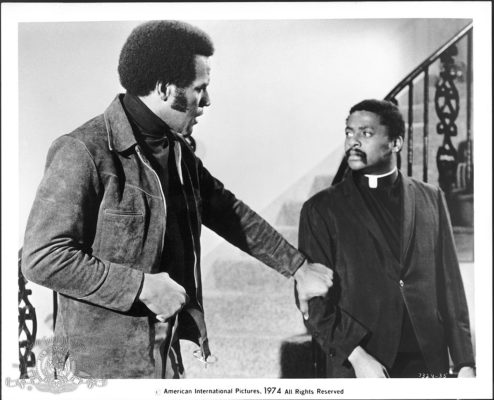 Much the same way that Papa Gibbs has a transformation in the sequel, Reverend Rufus (D’Urville Martin) goes through an unexpected arc that takes both BLACK CAESAR and HELL UP IN HARLEM to resolve. But where Papa Gibbs goes from relatively decent man to cold-blooded gangster, Rufus goes from gangster to sham minister to true believer in religion. Still, he has a tragic downfall in that his ministry was founded on Tommy Gibbs’ blood money and that original sin finally catches up to him when he tries to atone for it. Martin sells the hell out of a character who is difficult to care for, but comes the closest thing to a moral center in the wildly uneven sequel.

The first appearance on this list by Cohen regular James Dixon is his wonky take on a rural Georgia postal worker who is addicted to the titular monstrous desert. In true bug-eyed fashion, the very New York Dixon drawls on with a preposterous Southern accent and chews so much scenery, he turns in yet another memorable performance as one of Cohen’s oddball one scene characters that move the story along with maximum weirdness. This character gets extra points for Dixon’s performance where he pulls off the nearly impossible feat of stealing a scene from Michael Moriarty. 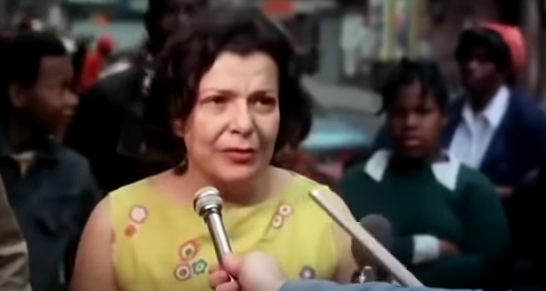 Straddling the line between a pitch-perfect spoof of the family member of an unexpected spree killer whom the media interviews and exploits for maximum impact and a tragic, unstable mother who desperately needs to believe her son could not be responsible for such horrific acts as the opening murders of the film, Mrs. Gorman (Jo Flores Chase) is one of the most nuanced and heartbreaking of Cohen’s one or two scene stealers. Chase gives a tightly coiled grip to her desperation that is initially funny (such as when she tells a reporter that her son who just murdered several people was a good student) before her second scene shows how broken she truly is and needs the protagonist of the film to prove that her son was not at fault, even if there is incontrovertible evidence that he was. 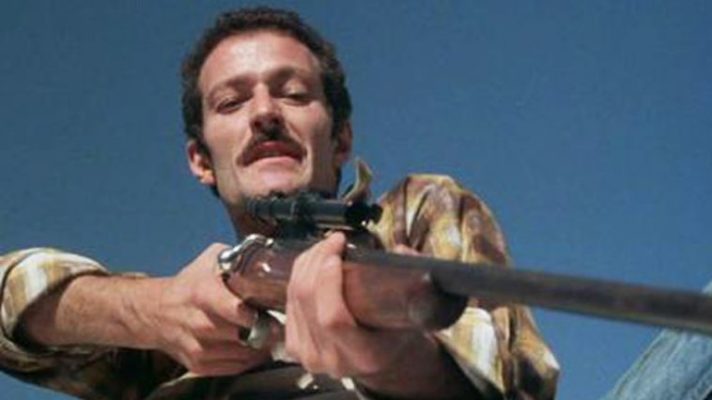 Speaking of Mrs. Gorman, her son Harold (Sammy Williams) is the first killer in the film, picking off pedestrians and cyclists with a rifle from a New York City water tower in a truly frightening opening. He is also the killer we get to know the best since he has a conversation with the protagonist–police detective Peter Nicholas (Tony Lo Bianco)–before committing suicide. The conversation allows Nicholas to learn a little about Harold in a nicely understated back-and-forth dialogue that ends with Harold delivering the first utterance in the film of “God told me to.” But it isn’t the chilling end to the conversation that makes Harold memorable. It is the fact that we just watched him kill several people, but then have a sane, comfortable conversation with a cop about who he is and why he did it. Harold’s bland friendliness makes the situation that much more horrific and kickstarts Cohen’s most probing, transgressive film. 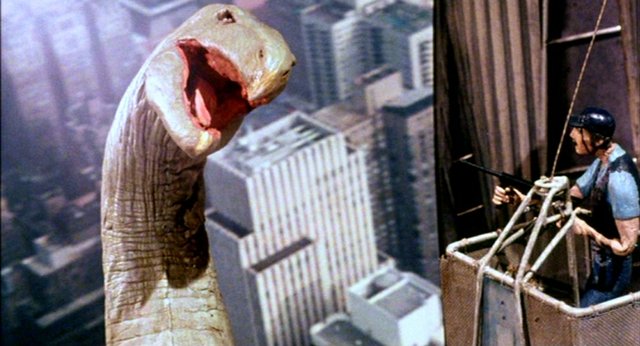 What it lacks in personality or good dialogue, it makes up for with its strange design, killer instincts, and impeccable timing. That’s right, I’m talking about the plumed serpent itself, Quetzcoatl. While the human characters may get all the best lines, a winged serpent swooping out of the sky to eat New Yorkers is too bonkers and memorable of a movie monster to not earn a spot on this list. 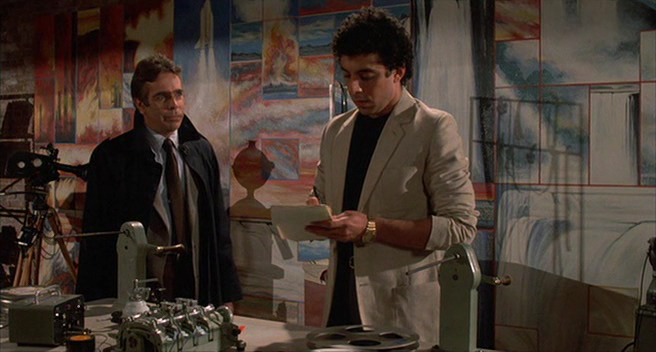 The second ineffectual New York detective to make this list, Delroy (Kevin O’Connor) gets special mention for also being fairly useless as a police officer by exploiting the murder of the woman whose killer he is supposed to bring to justice by becoming a producer on a film about her life and murder. It takes a special kind of cynicism for a dumb cop character in a movie to come off worse than a misogynistic psychopath and a hot-headed, possessive redneck, but Delroy does so with ease. You can almost see Cohen and O’Connor having fun undercutting the smug, smarmy bastard at every turn. It’s a blast watching him constantly be two steps behind everyone else, while he believes himself to be some sort of chess master. 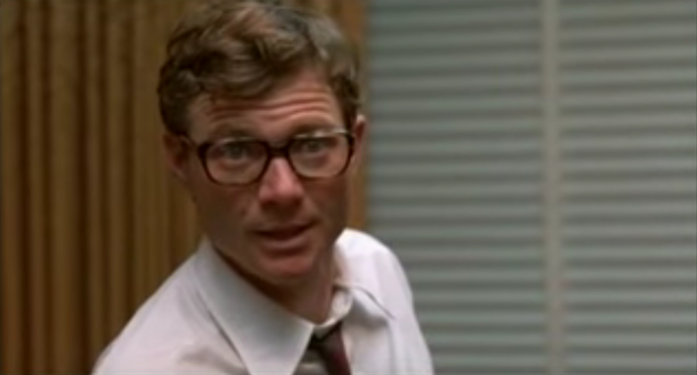 Speaking of movies with a brutally cynical take on corrupt authority figures, with THE PRIVATE FILES OF J. EDGAR HOOVER, Cohen found a new wrinkle in approaching possibly the most sainted member of the Kennedy family. Taking advantage of a terrific Michael Parks performance that highlights Robert Kennedy’s youthfulness while giving some pragmatism to the usual idealistic presentation of the Attorney General, Cohen turns him into the most formidable obstacle that Hoover had in his career, but eventually even Kennedy folds under the bullying, blackmailing schemes of the FBI director in his quest for complete power over Washington. To watch Parks as one of the last popularly believed “good” politicians get run over by the infamously corrupt lawman is bracing and cuts right to the dark heart of Cohen’s most ambitious film.

Movie: A RETURN TO SALEM’S LOT 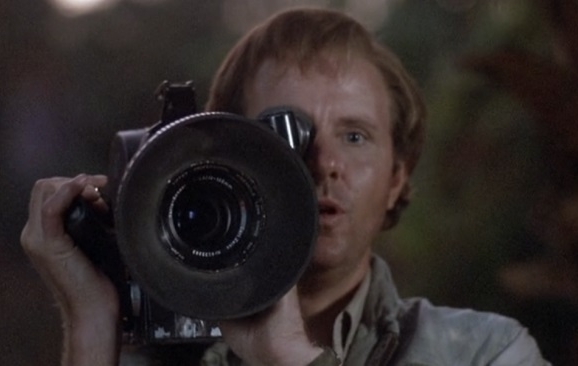 The character of Joe Weber is proof that if you cast Michael Moriarty in the blandest of roles and just let him go, he will turn the character into something worth watching. Surprisingly under-written for a Cohen male lead, Joe carries the central moral dilemma of the film as an anthropologist who has to decide if he should expose the community of vampires to the world or study them without interfering as he would any other culture. The problem with Joe’s arc is that it leaves him inactive for much of the first two acts. Moriarty still finds a way to bring the straight-faced comedy of the situation to the surface and keeps the film watchable until a very special supporting character shows up to outright steal the movie (more on that character later) from the greatest of Cohen’s scene-stealing collaborators.