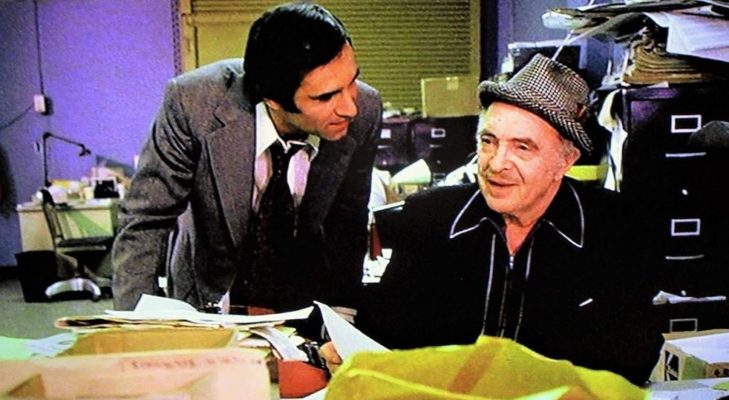 Another one scene character who makes a lasting impact, crusty old tabloid newspaper reporter Everett Lukas has the clearest motivation for wanting to publicize the truth behind the wave of killings in the city that he explains in the movie’s best bit of dialogue (delivered with perfection by character actor Sam Levene) when he really considers what would happen if God showed up in the flesh: “It’ll finish the churches. All the churches. All my enemies would be out on their pious asses. Total chaos! That’s what I like.” That’s a sentiment I can get behind and the reason that this character holds such a dear place in my heart. 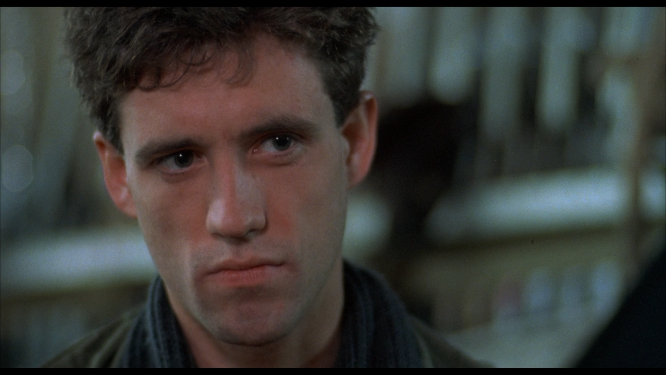 Brad Rijn was a staple in Cohen’s ’80s films, appearing in PERFECT STRANGERS, THE STUFF, and A RETURN TO SALEM’S LOT, after which he disappeared from the film scene. Of the four films he did with Cohen, SPECIAL EFFECTS made the best use of his combination of leading man good looks and physically threatening energy by casting him as the emotionally and physically abusive Keefe, an Oklahoma redneck who travels to New York City to find his runaway wife and ends up being framed for her murder. Keefe is more or less a dumbass, but he is the meatheaded antihero that the cynical, darkly funny, and meta movie needs to be more than just a satire of the independent film business. There is a true darkness to Keefe that Rijn brings through. He may be innocent of the murder he is accused of, but you get the feeling it would only take a slight nudge to actually push him into homicidal territory. 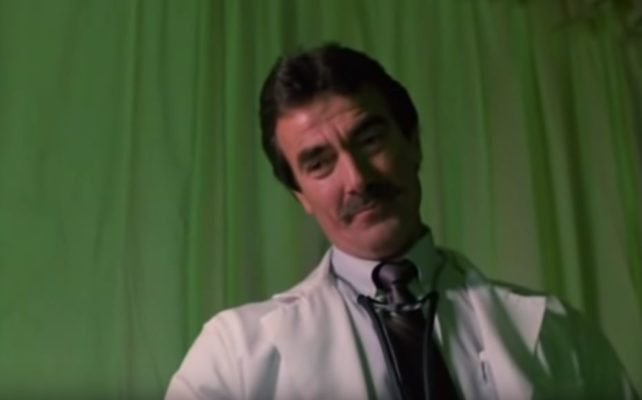 As much fun as THE AMBULANCE is, it honestly needs a more entertaining villain to fully put it over the top. The Doctor (Eric Braeden) behind the conspiracy to abduct diabetic New Yorkers and experiment on them is written as your basic mad scientist, convinced that the benefits to the greater good outweigh the damages and loss of life of his illegal experiments. But once again, Cohen casts the role perfectly, turning to Braeden, a suave soap opera bad guy, who brings the same sort of over-the-top daytime villainy to this role and has fun with his underwritten role, springing him to a spot on the list. 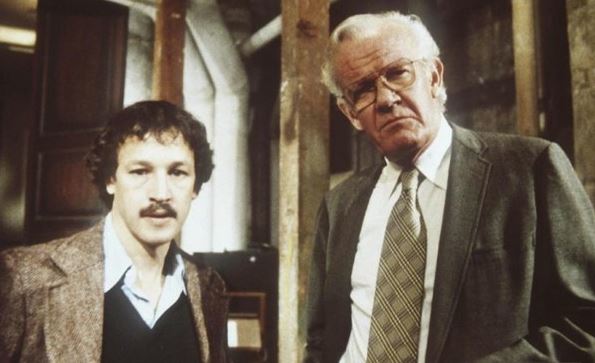 Simply referred to in the credits of IT’S ALIVE as “The Professor,” I am assuming that he is the same character referred to as “Dr. Perry” in IT LIVES AGAIN. After all, Andrew Duggan plays the character in both films and it would make sense that his one scene scientist from the first film would devote his life to the study of the mutated babies. As the one truly ambiguous character in the underground movement to save the babies from extermination, Dr. Perry tries to straddle the line between scientific curiosity and empathy for his subjects. Cohen regular Duggan brings an understated humor to his character as he thaws from the first film’s callous researcher to a man who is bemused instead of horrified when he realizes that time may be running out for the human race as he has always known it. 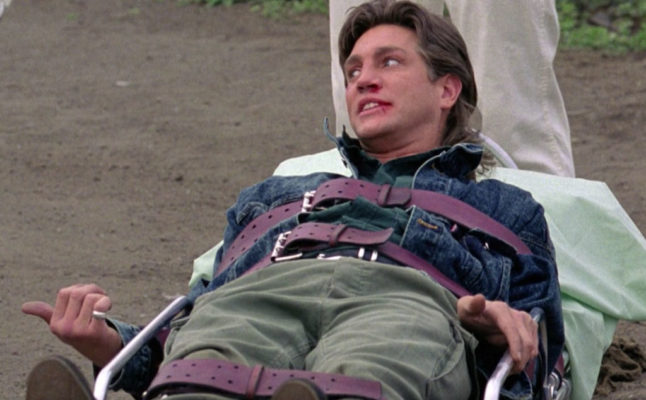 Much like Michael Moriarty playing Joe Weber in A RETURN TO SALEM’S LOT, nearly everything that makes comic book artist Josh Baker interesting is in the casting. In this case, Eric Roberts takes a boring protagonist who is, quite frankly, one step away from being a stalker, and turns him into a rubber-faced weirdo. Given the opportunity to chew on some fun Cohen dialogue, Roberts combines the crazed, throwing his body around like a rag doll physicality of a young Bruce Campbell with the line readings of Jim Carrey circa the first ACE VENTURA movie to have a blast in Cohen’s wonky take on the action-comedy genre. 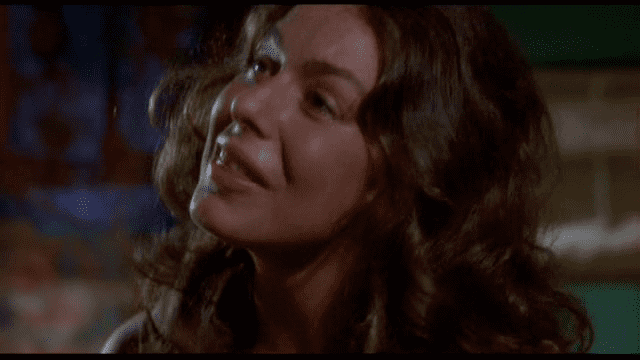 Despite the fact that her scenes feel like a detour into a short film that has little bearing on the main plot, the unnamed young woman (Jeannie Berlin)—credited only as “the girl”—who distracts Bill (Andrew Duggan) from his supposed mission initially comes off as just another of Cohen’s entertainingly oddball bit characters. But once the depths of her neuroses (and their cause) are revealed, she is a character who is basically forty years ahead of her time: a savvy takedown of the “manic pixie dream girl” myth. Obviously, Cohen and Berlin had no idea that they were doing something that subversive with the character—she simply was intended as another roadblock in Bill’s fumbling adventure through a Beverly Hills that suddenly seems alien to him. But Cohen realized what he had with Berlin and kept expanding her scenes to a point where the viewer almost wants to follow her instead of Bill when they part ways. 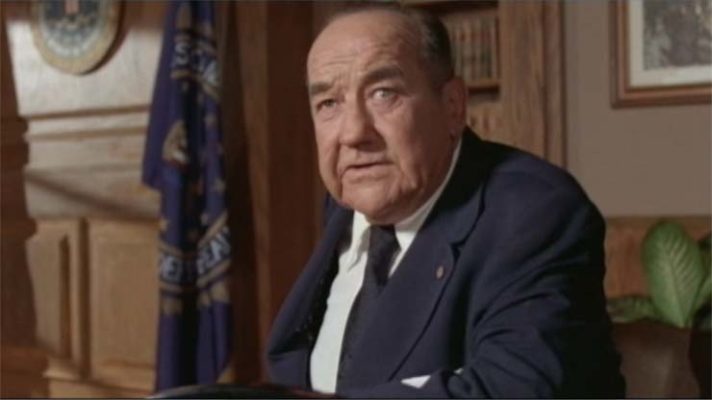 By his own design, J. Edgar Hoover remains very much a mystery. Rumors of his sexuality aside, little is known of his personal life, so Cohen extrapolates what the man might have been like from how he conducted himself as Director of the FBI. The portrait that Cohen and James Wainwright (as young Hoover) and Broderick Crawford (as older Hoover) paint is one of a man so consumed by a need to always hold power and never have it held over him that corruption and hypocrisy seep into every aspect of his life. As paranoia curdles his soul, Cohen presents Hoover as the dark heart of several instances where America made a wrong turn. A frightening villain made all the worse by how plausible Cohen’s version of him is. 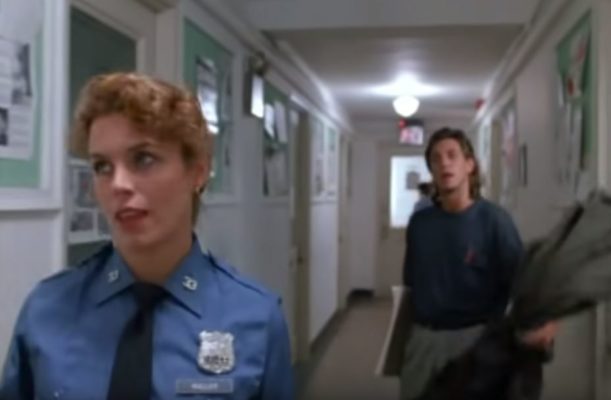 There has to be something slightly off about any woman who is interested in Eric Roberts’ character in THE AMBULANCE, right? Thankfully, Cohen and Megan Gallagher recognize this and don’t play the trigger happy police officer straight. In a running joke, she makes the wrong call almost every time, even though she is one of the few people who believes the crazy story that Roberts’ comic book artist is spinning. Gallagher is fun in the role and buys into the potentially strange tone that the story needs to succeed, providing a love interest who is more flawed and interesting than the male lead  in the late ’80s/early ’90s for a change.

In a movie full of tragic characters, Martha Nicholas (Sandy Dennis) has to be in the top three for her share of unearned misery. Caught up in a cosmic mystery that few could possibly understand, her only mistake was to fall in love with the wrong man. As his tragedy became her tragedy, she not only loses her husband, her unborn children, and her sanity, she takes on a role that can almost be called “martyr by proxy” as she sacrifices her future and any hope for normalcy to become her ex-husband’s de facto therapist and eventually tries to help his new girlfriend understand why it will never last between them. Dennis plays Martha with a mixture of deep sadness and bitter acceptance of the role thrust upon her. She is unfair collateral damage in a conflict out of her control, but her ability to maintain her dignity as she takes her undeserved punishment is what makes her an impressively strong character. 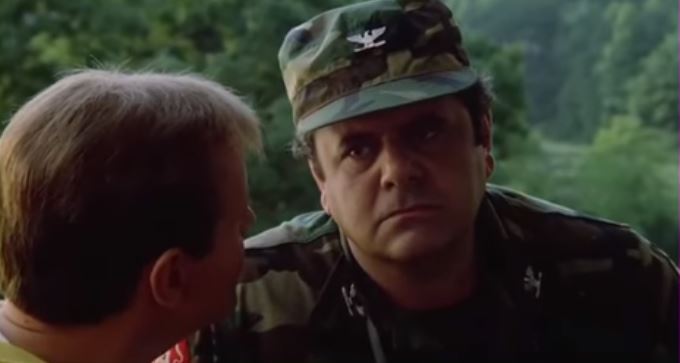 Perfecting the paranoid, right-wing military buffoon he began as a rough sketch with Ed McMahon’s character in FULL MOON HIGH, Cohen subversively turns the caricature into an inadvertent hero in THE STUFF. That hero, Col. Malcolm Grommett Spears (Paul Sorvino), isn’t even an actual member of the United States military. A goofy combination of a self-appointed militia leader and a proto-Rush Limbaugh right wing radio personality, Spears is used by the film’s nominal heroes to defeat the evil corporation behind the distribution of “the Stuff.” The joke (that Sorvino wisely never over-plays) is that the crazy person with a gun and screwy ideas is not nearly as dangerous as the seemingly benign corporation that provides a beloved desert to the public. Money and influence, Cohen seems to be saying, is far more dangerous than a few guys in the woods playing soldier.