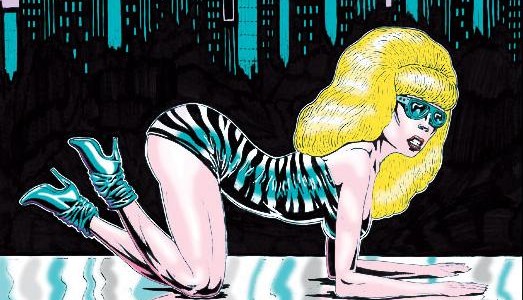 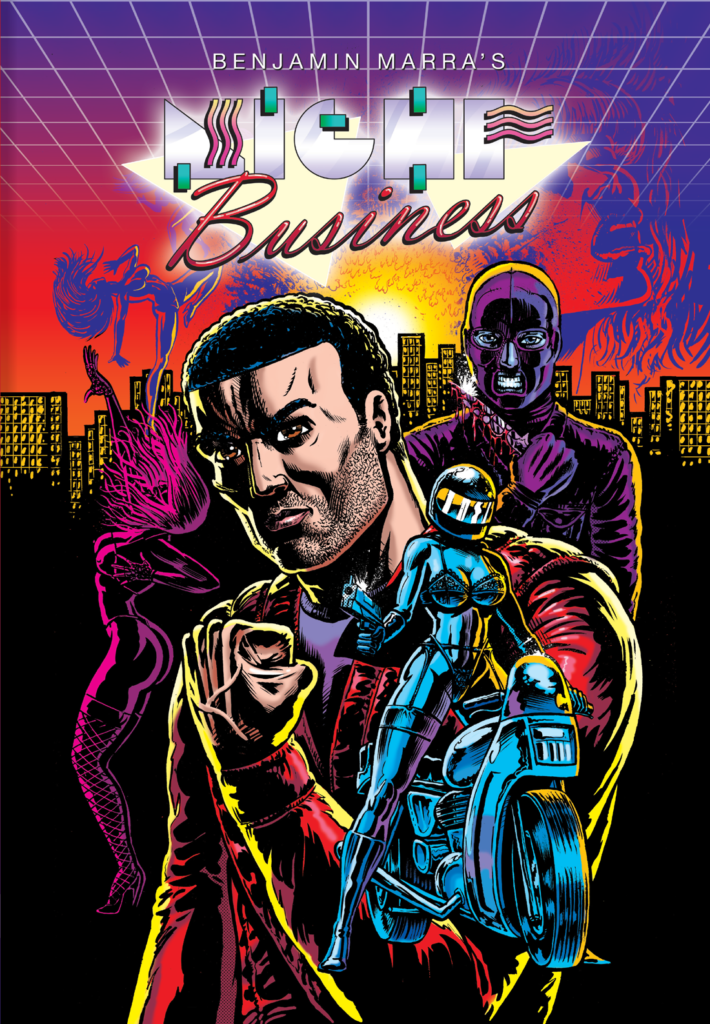 So how does this work? I mean, you either know what you’re getting into with a Benjamin Marra book or you don’t — and if you know that much, you probably also know whether or not you’re going to like it. No artist in the comics medium this side of Steve Ditko has pursued such a singularly myopic and obsessive worldview, and whether we’re talking about outer-space barbarians, post-Civil War freed slaves, secret agents in the “War On Terrorism,” or “gangsta” rappers,  the basic formula really doesn’t change, does it?

“Characters” as we understand the term don’t really exist in Marra’s world(s), but caricatures abound : men are invariably square-jawed, misogynistic, super-powered, and either “all good” or “all bad” (usually the only difference being that the “bad guys” start the killing off while the “good guys” finish it): women are basically all T&A and can’t seem to help either throwing themselves at the “good guys” or being raped by the “bad guys;” cops are corrupt, incompetent, or both; taking matters into one’s own hands is presented as the only viable solution to any problem.

Huh. Looked at that way, just take out the sex (and sexual violence) and you’ve basically got any ole Marvel or DC comic, don’t you?

Well, yes and no — clearly the tropes inherent in vigilante-themed fiction are more than just “laid bare” in Marra’s comics, they’re dialed up to levels that even the most bloodthirsty Punisher adventures wouldn’t dare to emulate. One would assume, then, that he must be engaging in some sort of de facto deconstruction just by dint of sheer excess, but that’s where things get confusing — and maybe they shouldn’t, because by and large this is almost gleefully simplistic stuff. 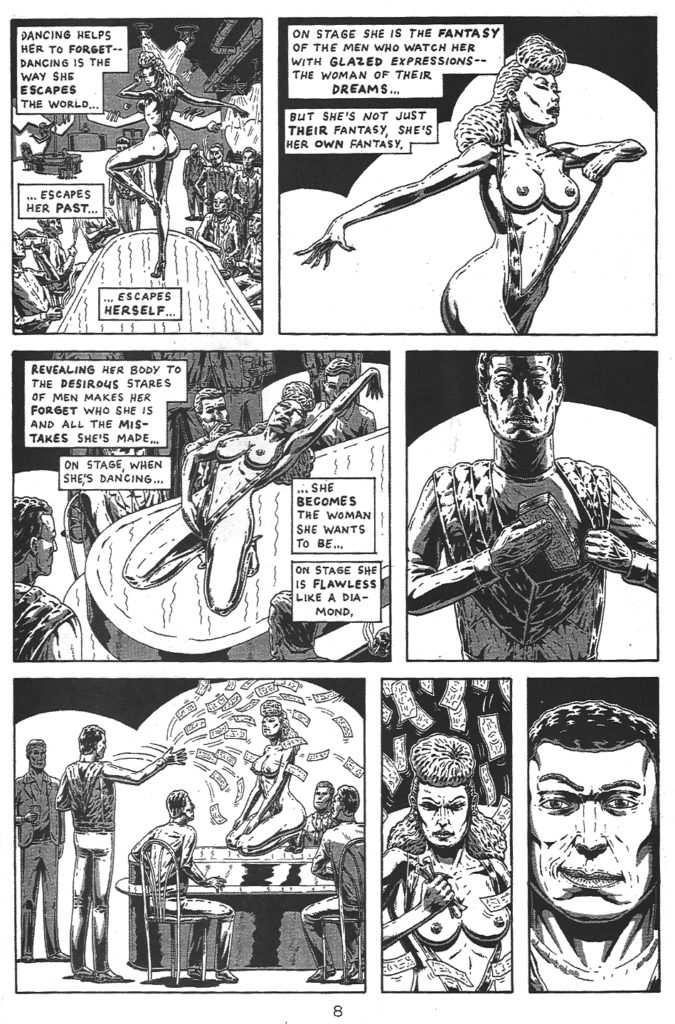 Take, for example, Marra’s lengthiest work to date, the just-released hardcover graphic novel Night Business (the first four chapters of which were available in “single issue” form as print-on-demand jobs bearing the label of Marra’s Traditional Comics imprint). Set in a 1980s New York brimming over with strippers, pimps, gumshoes, studs, serial killers, and sleazeballs, this is every bit as unsubtle as Terror Assaulter: O.M.W.O.T. or Gangsta Rap Posse, but its tongue is placed far less firmly in its cheek, and I’ll be damned if there’s anything like a guilty-pleasure chuckle to be found anywhere within its 232 pages. But does that mean Marra’s taking either himself, or his material, seriously all of a sudden? Don’t bank on it.

In his “pull-quote” on the back cover, Sammy Harkham says Night Business is “like Douglas Sirk directing an Abel Ferrara script,” and while I’m not one to take exception with the words of one of the finest cartoonists of his generation, to me what Marra’s created here is something more akin to Nicolas Winding Refn cranking out a remake of Fulci’s The New York Ripper: exotic dancers with names like Jazzie, Krystal, Chastity, and Alexis are either victims of, or bait for, a violently woman-hating psycho known only as The Slasher, but their erstwhile “manager,” Johnny Timothy, is determined to both protect the “clients” in his “stable” and discover the identity of their assailant. Will one man be enough to unravel a scandal that comes complete with hooded cult members and leads all the way from the city’s posh penthouse suites to its seedy (and literal) underground, though?

Fortunately for Johnny, he’s got a human ally in the form of a less-than-mysterious helmeted do-gooder who rides around on a scooter in sexy lingerie, and a chemical ally in the form of a “super-serum” administered to him by his mafia “patron,” Uncle Enzo. Cue a shitload of sleazy nightclub shenanigans, domestic violence, back-alley butchery, even necrophilia. Over the top by design, but without any real moral compass, those looking for a “message” here are going to be hunting high and (mostly) low for a long time — but does a work really need one in order to validate its existence? 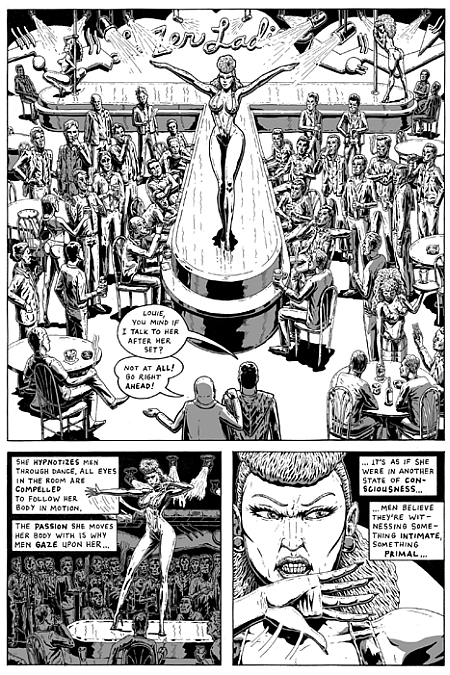 I guess that’s up to each reader to decide for him or herself, but if what really floats your boat is the idea of a comic that could be set to and endless loop of Wings Hauser’s “Neon Slime” theme song from Vice Squad, then seriously, you need look no further. Marra’s drawings are as intentionally ugly as his subject matter, and here take a more intentionally “realistic” tack than in some of his prior efforts. Facial expressions are designed to leave nothing to the imagination; bodies are exaggerated, sure, but not to the point of being entirely outside the realm of possibility; buildings, streets, vehicles, etc. are illustrated to emphasize a kind of foreboding but recognizable utility. This is a city we recognize conceptually, if not literally, and the same is true of its inhabitants. It would be a heck of a stretch to say that Marra’s delineating the ’80s as we remember them (assuming “we” were around back then), but it’s definitely the ’80s we remembered watching on early-era cable TV late-night movies.

What it’s all in service of remains either a tantalizing or frustrating thing to parse out, though, and while I both understand and respect the critics of Marra’s work who point to the easily-discernible fact that all of it too self-aware by half (at least), his steadfast refusal to define Night Business by the narrow parameters of “spoof,” as he’s done so often before, makes it an inherently more exciting, and perhaps even ambitious, narrative than we’re used to seeing from him. I just wish I had a more firm grasp on whether or not I feel it’s a more successful one. 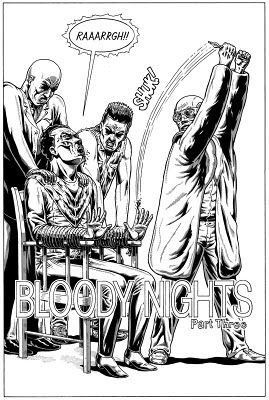 Future re-examinations will no doubt help me come to grips with that question, but that’s a quietly remarkable thing right there in and of itself: most of Marra’s earlier comics were easy enough to pin down and probably only warranted a re-read if you were looking to laugh at the same outrageous shit one more time. Night Business is the first to require further, and deeper, analysis in order to intuit its very meaning — and even if, in the final analysis, all he’s looking to do here is tell some hyper-masculine revenge tale bursting at the seams with relentless rage, sadistic slaughter, ample aggression, and big boobs — well, hey, at least he’s done that much really goddamn well.