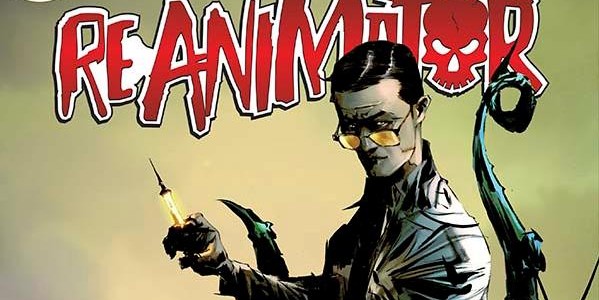 IT’S THE SECOND EPISODE OF OUR NEWEST FEATURE AT DAILY GRINDHOUSE! 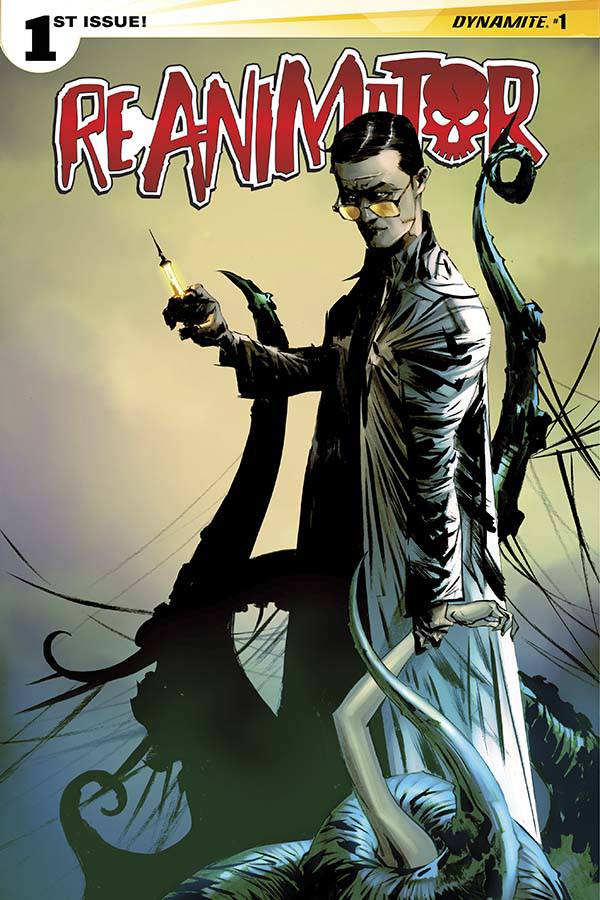 I know, I know — it’s a slow pitch right over the middle of the fucking plate. When a character like Dr. Herbert West, the Reanimator (or Re-Animator, as the film would have it) is brought back from cold storage, the headlines for a review are just too easy and too obvious — “Reanimating ‘Reanimator,'” “Back From The Dead,” “Dynamite Breathes New Life Into Cult Favorite ‘Reanimator,'””Herbert West — Reanimated!,” the list is endless. Honestly, I tried to come up with something a bit more original, but I’m not even sure it can be done. 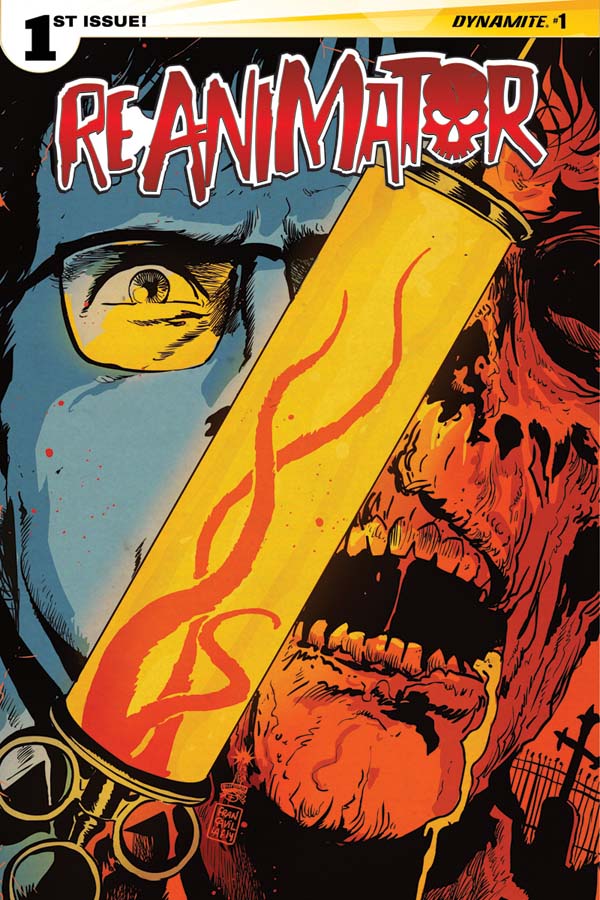 Fortunately, the creative team for Dynamite’s new Reanimator ongoing monthly comic book series doesn’t seem to suffer from the same lack of creativity as yours truly. Writer Keith Davidsen and artist Randy Valiente jump right in head first, introducing us to new supporting player Susan Greene as she finds herself immediately out of her depth in a “drug deal gone bad” situation, only to be rescued, and then offered employment by, the not-so-good Dr. West himself, who quickly catches us up on what’s been happening  in his life — or maybe that should be lives, since our recap is an amalgamation of events  originally detailed by our guy Herb’s  creator, H.P. Lovecraft, then expounded upon cinematically by the trifecta of Jeffrey Combs, Stuart Gordon, and Brian Yuzna, and finally encompasses the works of various creators who have tried to get something going with the character in various and sundry licensed comics prior to this one — before our anti-heroes, along with a shambling undead sidekick known as The Valusian, find themselves smack dab in the middle of a war between rival New Orleans voodoo gangs. Throw in a bit of mystery surrounding the perhaps-not-so-accidental meeting of West and Greene in the first place, and what you have is breakneck-paced debut installment that never takes its foot off the gas and provides more smiles-per-page than any right-thinking person with even casual exposure to “spin-off” comics of days gone by would dare hope for. 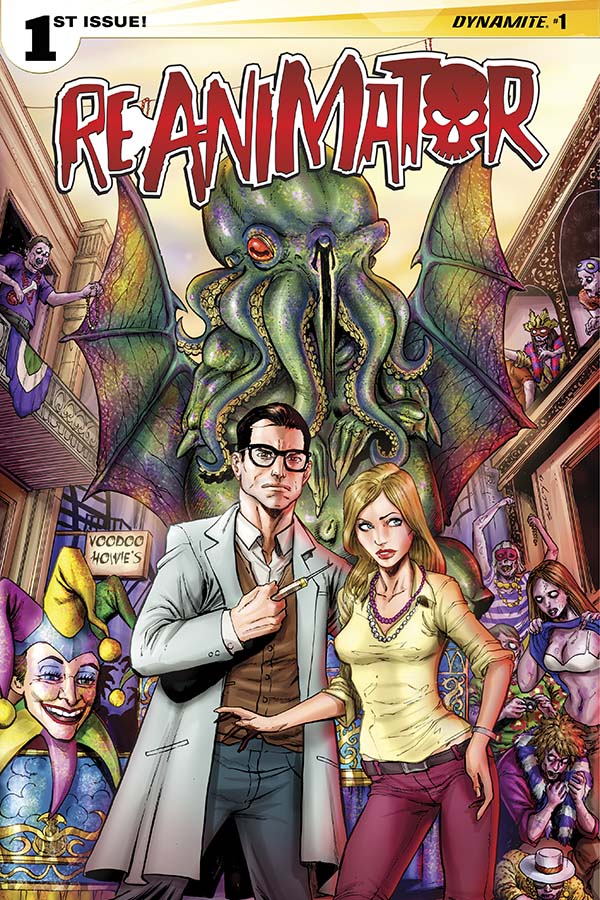 Then again, Dynamite has been absolutely killing it with their Shaft series, so maybe we shouldn’t be surprised that they appear to have assembled a group of creators (although I guess it’s only a “group” if we count the cover artists — yes, there are no fewer than 13 variants for this issue; I went with Jae Lee’s, as pictured at the top here) ready to knock this one out of the park, too. 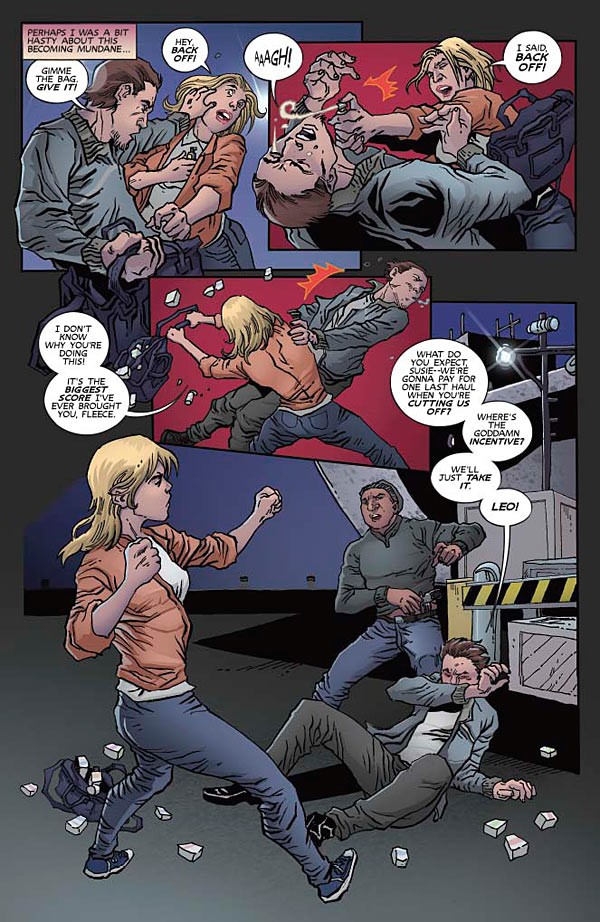 Valiente’s art style may be a bit more “cartoony” than hard-core horror fans would either hope for and/or expect, but seeing as how Davidsen is clearly taking his tonal cues for this book from Stuart Gordon’s film — which was at least as much a comedy as it was anything else — I think it fits perfectly, and everybody looks like real people, warts and all. It’s not super-stylistic and doesn’t dish up a tremendous amount of “eye candy,” but it certainly works, and has a kind of free-flowing dynamism to it that is actually quite engaging. For my part, I dug the look of this issue quite a bit. 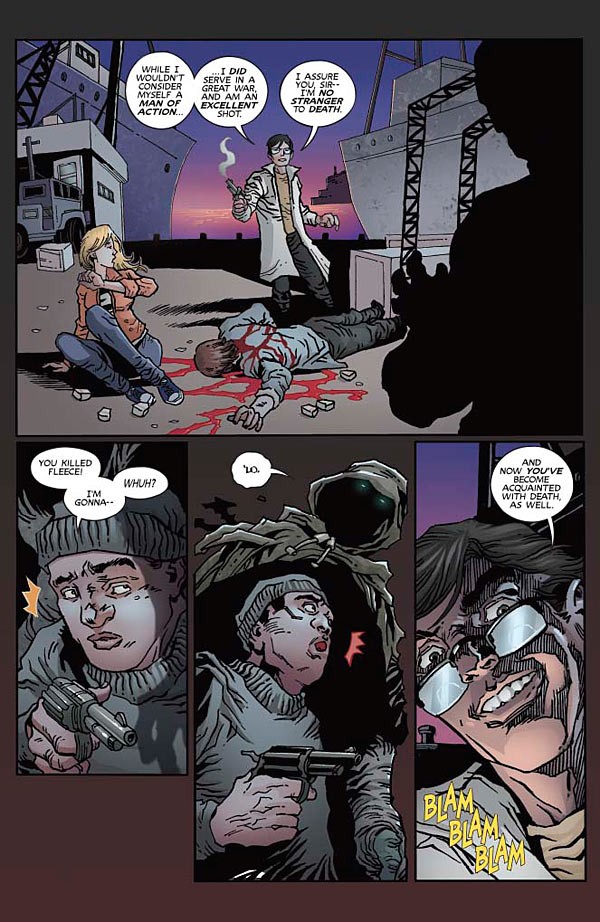 Still, I gotta say that it’s the story that really grabbed me the most. Davidsen, whose prior work I confess to being unfamiliar with, really nails it here, and most of the lines he feeds West are the sort you can clearly hear Jeffrey Combs delivering with relish. Overall the impression of the Reanimator that we’re left with is of a guy who’s obviously nuts, completely lacking in morals and ethics, and single-mindedly obsessive in his pursuit of less-than-noble goals — but he’s just so awkwardly charismatic that you can’t help but follow him wherever he’s going, even though you know it’s nowhere good. Bravo to our intrepid freelancer for a job very well done indeed.

Die-hard Lovecraft fans should find plenty to like here, as well, seeing as how tantalizing hints are dropped that the larger Cthulhu mythos will be playing a significant role in the proceedings going forward, and while I don’t expect them to be dealt with in the same “high-brow” intellectual manner that we’ll no doubt be seeing in Alan Moore and Jacen Burrows’ forthcoming Providence series from Avatar Press, it’s a safe bet that Davidsen and Valiente won’t be playing it all strictly for laughs, either. There are some decidedly treacherous undercurrents in these waters, and we’re pretty much assured a bumpy, but ultimately pleasing, ride. I’ve seen enough already to convince me that it would be wise to stick around for the duration — and to hang on really tight.

AND HERE’S @JONNYABOMB ON RE-ANIMATOR: THE MOVIE!

AND FROM THE ARCHIVES, OUR INTERVIEW WITH STUART GORDON HIMSELF!!!