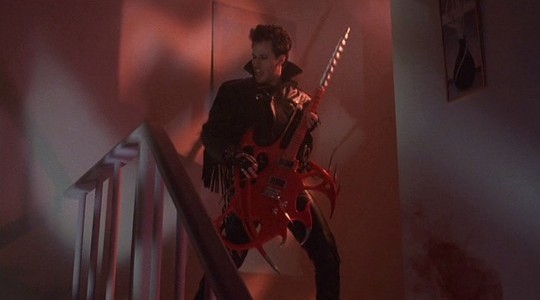 Welcome to another round-up of new music videos with their hearts in genre films and exploitation that serve as great short films that accentuate the music they’re made to promote while still having an original vision. This week, we’ve got stars in peril, computer animation history and whatever the hell is going on in that Major Lazer video!

A nice vacation in the big city gets impressively creepy in this eerie short starring Julia Stiles (THE BUSINESS OF STRANGERS) and Fran Kranz (CABIN IN THE WOODS).

Sure, internet cat videos are par for the course, but this impressively disturbing one features prison escapes, car accidents, taxidermy and the most vicious feline revolt this side of THE UNCANNY. (And there’s more action in five minutes here than the entirety of NIGHT OF A THOUSAND CATS.)

The history of computer animation is traced through this hypnotic short, showing the evolution from painstaking process to being essentially a toy, ending with a nifty computer recreation of the band.

A potentially pleasant evening of dinner with the family at a classy establishment gets derailed within the fantasies of the young daughter, who has much more interesting ideas in mind as to how the night should go in a well-crafted, intensely-shot short that emphasizes the Black Angels’ catchy track nicely.

What starts out like a grungy SPRING BREAKERS ends up going off into deranged territory when the gigantess Buttzilla invades in Eric (THE COMEDY) Wareheim’s loopy short that’s part ATTACK OF THE 50 FT. WOMAN, part Sir Mix A Lot.

The brooding, dark set-up for this video, as various strangers are frightened and repulsed by the character whose POV the video is shot through, and the Goblin-esque sounds of Chaze are so good that the reveal is a little bit of a letdown. Still, for the most part, it does fine service to the track’s tone and manages to never feel like a found footage cliche.

BLOW UP (french subtitles) from Hawaii & Smith on Vimeo.

The French subtitles (and the title of the track) emphasize the European tone of this short about a man tracking down a mysterious woman though a serious of clues, working nicely with Kidfrancescoli’s deadpan-yet-catchy track to feel a bit like a modern music video version of a Claude Chabrol film.

Skylar Grey’s ominously upbeat song is given an appropriately haunting storyline as a young woman seems to return from the grave, complicating matters for a couple in which the husband may know much more about her than he’s letting on.

A couple months old, but I still wanted to point out this inspired work, about a normal guy who moves into a neighborhood populated by superheroes and the cult he ends up joining to fit in, backed by the dubstep sounds of Boys Noize.

HAUNTED LOVE from thecampaignbook on Vimeo.

Yes, it’s THAT Shia LaBeouf behind the camera, but don’t let that keep you from checking out this bloody, ambitious, and moody piece that almost (but not quite, thankfully) overpowers Future Unlimited’s low-key tones.

Queens of the Stone Age have produced a number of animated music videos for their latest album, but here they are together in epic, 15-minute form that provides a mini-HEAVY METAL that would stand on its’ own as a short film damn well.

The practical effects team behind PROMETHEUS were responsible for bringing to life some of the hentai-influenced critters in this oozy, yet oddly sexy, take on Tesseract’s increasingly aggressive track.

Tom (SWOON, SAVAGE GRACE) Kalin directs this trippy video of “shakers” (inspired by Louise Brooks in DIARY OF A LOST GIRL) held together by a young man doing parkour all over the damn place.

Our vintage track this week comes from Bill Paxton’s band Martini Ranch, as director Schenck mixes vintage clips from the likes of METROPOLIS with Devo-esque footage of the band in a blend of bizarro pop-art surrealism that could have only come from the ’80s.

Be back when the jukebox has been restocked. Click here for an archive of all of our Grindhouse Grooves column.