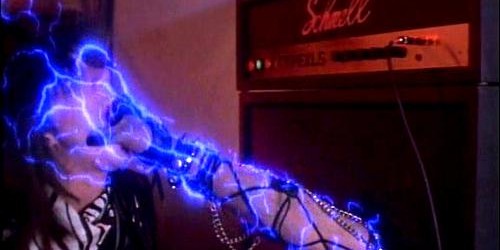 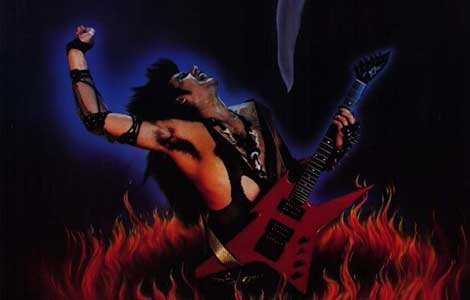 IT’S TIME TO KICK OUT THE JAMS, BASTARDS.

It’s time for another edition of Grindhouse Grooves, showing the latest videos who take their cues from the more dingy side of the cinematic tracks. So scroll down, sit back, and quit whining about how music used to be better back in your day, and how MTV sucks now. Seriously, they know. They don’t care. Move on.

The first video in our list directed by Gaspar Noé (IRREVERSIBLE) features directions that it should be viewed in “complete darkness for maximum effect.” It may also lead to maximum seizures, but hey, Noe fans (like myself) will be well prepared.

Nick Cave and the Bad Seeds – We No Who U R

A desolate planet, alien creatures and a bubblegum-popping dude who sits in the middle of a desert as though someone never told him the filming for HOLY MOUNTAIN had ended all come into conflict in this groovy mini-flick.

Brad Dourif is welcome in anything, and when he’s playing a debaucherous devil, all the better. The video delves into several hip hop video trappings, but it’s still a fun ride.

Cyriak has been mentioned in this column before, and even if his videos tend to be stylistically similar plays on repetition and cycles, they’re never less than fantastic. His video for “Cirrus,” usine ‘50s ephemeral films as a starting point, is no exception. Someone give this guy the chance to make a KOYAANISQATSI-like movie, stat.

How to Destroy Angels – How Long

A music video for a Trent Reznor project is pretty much automatically of note, but one about an apocalyptic return to primal ways is especially of interest. The directors have said they were influenced by THE VIRGIN SPRING, but it’s more the gloominess and violent simplicity of the VIRGIN SPRING-inspired LAST HOUSE ON THE LEFT that I see here.

Similar in tone to Patrick Jean’s PIXELS, Kristofer Storm’s take on an 8-bit video game that comes to life in the form of a blast-crazy robot and starts destroying everything pretty much nails the song it’s supposed to promote perfectly.

Sharon Needles – This Club is a Haunted House

Sharon Needles was the well-deserved winner of drag queen competition show “RuPaul’s Drag Race,” and her gothic-but-campy aesthetic should have made her a natural for a fun music video. Unfortunately, bloody final third and Linda Blair and William Castle references aside, it takes way too long to get going and the song is more standard dance pop than nightmarish descent into darkness.

The Killers – Here With Me

I’m not a huge fan of The Killers, but they’ve been kicking ass on the music video front lately – MISS ATOMIC BOMB uses cold war imagery and Mobius-like animation to maximum effect, I FEEL IT IN MY BONES features an entertainingly deranged take on Santa Claus, and Tim Burton’s take on a creepy young man (SUBMARINE’s Craig Roberts) who becomes obsessed with a wax figure is the best leading role Winona Ryder’s had in years.

The VHS retro-look strikes again, but it makes good use of Crystal Castles’ whispery vocals and catchy dance beats, anyway.

The Fat Dukes of Fuck – Cigarette

Those who can’t get enough of LET MY PUPPETS COME should enjoy this (NSFW) B&W video in which felt creatures get particularly nasty. Directed by Dustin Mills, the man behind THE PUPPET MONSTER MASSACRE and whom we’ve talked to here.

We talked with Jason Willis here, but I’d be remiss to not point out his groovy stop-motion music video filled with ghouls and voodoo here as well, because it’s a great song and a great video that’s worth another mention.