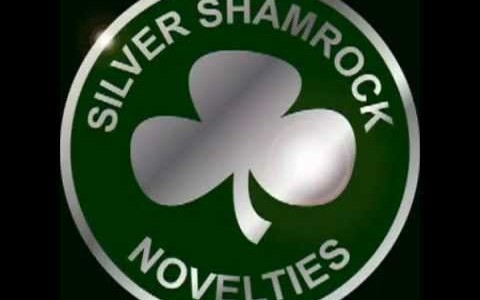 Santa Mira, Ca.- IT APPEARS the joke is on Silver Shamrock CEO Conal Cochran as millions of parents have the last laugh in a multi-billion dollar class- action lawsuit. The lawsuit awarded yesterday stems from an October 31,1982 incident in which the heads of millions of children across the nation wearing Silver Shamrock masks simultaneously exploded into showers of insects and snakes during a broadcast of Silver Shamrock’s annual television Horrorthon.

At a press conference in Santa Mira yesterday, Silver Shamrock attorney Gavan O’Herlihy released a statement condemning the decision and vowing to appeal.

“We at Silver Shamrock categorically deny and rebuke these charges and are steadfast in our assertion that there is nothing dangerous whatsoever in our product line. Further, we wish to assure the public that Silver Shamrock remains committed to providing the finest selection in the Gee-Gaw industry. From the hilarious Dead Dwarf gag, to our classic Sticky toilet paper, we at Silver Shamrock stand by our mirthful products.” Cochran’s representative declined further comment on the matter, citing proprietary information exclusive to Silver Shamrock Novelties, as well as what he called “a few trade secrets,” adding a mischievous wink.

Marv Tack, attorney for the parents in the tragic case, was no less indignant in his rebuttal to Mr. O’Herlihy’s comments, calling the incident, “A gross abomination… a travesty. Here you have a company that has aggressively targeted minors with characters specifically designed to appeal to [children] and then, when Halloween night rolls around, suddenly the heads of millions of kids disintegrate into a mass of writhing snakes and bugs. Not only have [Silver Shamrock Novelties] failed in their duty to protect our most valuable asset—our children—they’ve betrayed our consumer trust.”

Indeed, the products in question were nothing if not ubiquitous in the months leading up to Halloween 1982. As children across America clamored for the prized masks, many stores struggled to keep them in stock. An all out multi-level marketing campaign on the part of Silver Shamrock only served to fuel the frenzy and to heighten the “gotta have it” factor that is becoming so pervasive in modern marketing. Market analysis of third quarter sales among the nation’s pre-teens and adolescents suggest that nearly 99% of the nation’s 63.7 million youngsters purchased the masks. If anything, perhaps the Silver Shamrock phenomenon of ’82 can be interpreted as a cautionary tale to the dangers of mass-conformity. While the mass-market success achieved by Silver Shamrock’s “Big 3” may be traced in no small part to Cochran’s intrepid marketing skills, Tack and the millions of parents he represents see this as a clear case of “overkill.” 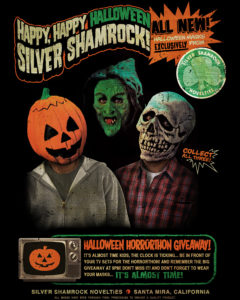 “Hey, I grew up with Silver Shamrock too,” says Jack Fry, 48, of Park Ridge, IL, a plaintiff in the suit. “I had the Soft Chainsaw and all the other stuff just like any other kid at the time. So when my youngest son Brian came home with a Silver Shamrock mask last September I didn’t think much of it.” Teary eyed, Fry adds, “But now Brian is dead, my house is infested with crickets, and I suffer partial paralysis after I got bit by the rattle snake that crawled out of my son’s eye sockets.”

Attempts to reach Conal Cochran have proven fruitless since the devastating fire that destroyed Silver Shamrock’s headquarters on Halloween night 1982. And while authorities strongly suspect arson as the cause, no arrests have been made and Silver Shamrock representatives remain mum on the subject. So just who is Cochran anyway? 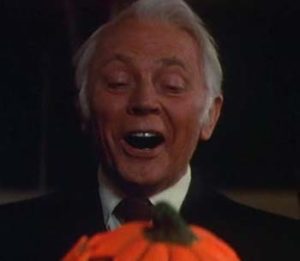 Born in 1918,the eldest of 13 children and the son of Irish immigrant parents, Cochran overcame a hardscrabble childhood in New York’s storied Hell’s Kitchen where early on he displayed an innate marketing savvy, a keen wit and the propensity for a good practical joke. Later in life Cochran would often reflect bitterly upon these years, often recalling a childhood during which he was forced to “Beg for candy.” In 1945 at the age of 27, he established Silver Shamrock Novelties and with the advent of his trademark sticky toilet paper, quickly rose to the ranks of the practical joking vanguard. At the end of World War II and by now a self-made millionaire, the young Irishman hailing from Hell’s kitchen relocated to Santa Mira, California, and a small farming community on California’s remote northern coast. His business prospered and as Silver Shamrock flourished, Cochran was seen by most as a pillar in the community. Still, some long time residents of Santa Mira expressed dissatisfaction with his hiring practices. Cochran it seems employed only hand picked men and women from outside Santa Mira to attend to the operations at Silver Shamrock.

While the future of Silver Shamrock Novelties remains uncertain in light of current litigation and the previously mentioned fire, Cochran remains characteristically enigmatic. On top of all this, current trends forecast a diminishing market share for Cochran and his once powerful brand. Tried and true formulas that paved the way for Silver Shamrock’s success in the more simple 60’s and 70’s, may not prove as effective with today’s more savvy “Pac-Man” generation, if for no other reason than the fact that most of that ill-fated generation was wiped out in last Halloween’s hijinks.
Minnie Blankenship, a lifetime Humboldt County resident and former Grandmother of nine has already seen a switch saying, “This Christmas all my two remaining grandkids want are Cabbage dolls and an Atari 5200.”