Join us for our year-long celebration of the USA World Premiere Movie in conjunction with Made-for-TV Mayhem! Check out out previous entries on THE FORGOTTEN here, MURDER BY NIGHT here, THE TICKET here, SNOW KILL here, DEADLY GAME here, ACCIDENTAL MEETING here, HITLER’S DAUGHTER here, ARE YOU LONESOME TONIGHT? here, AS GOOD AS DEAD here and MURDER ON SHADOW MOUNTAIN here, TRUCKS here and OUR MOTHER’S MURDER here!

Through the many years of the USA World Premiere Movie, the “Characters Wanted” network produced films that were exciting, dramatic, action-packed and/or kind of cornball, but virtually all of them hinged on a serious premise and were made without much humor unless it came naturally from the characters. As entertaining as they may be, “charming” isn’t really a word that can be used to describe any of them – USA didn’t really make films that could be classified as “comedies,” instead returning to the old standbys of thrillers, mysteries and horror films that could provide two hours worth of easy entertainment.

The sole exception to the rule is THE HOLLYWOOD DETECTIVE, the kind of film for which the word “charming” was invented. First airing on October 25, 1989, just a few months after they’d aired their first in-network TV-movie and were still playing with the format, THE HOLLYWOOD DETECTIVE is an old-fashioned light mystery film with a winking twist and a great performance by Telly Savalas that makes it one of the most pleasant, likeable made-for-TV movies of the era. 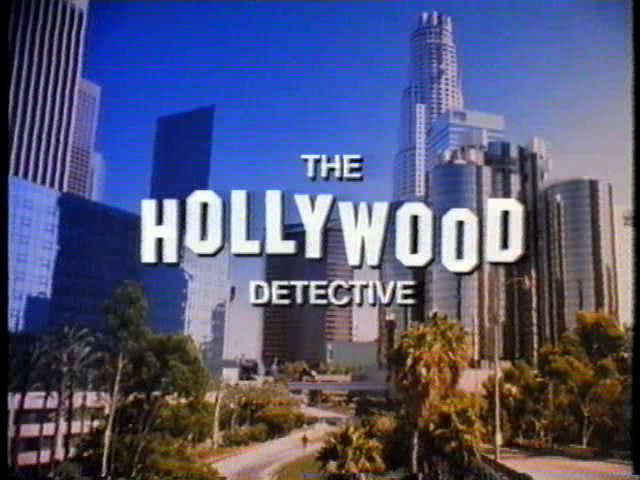 In DETECTIVE, Savalas plays Harry Bell, a “drunken has-been” former television detective best known for his role in the NBC series “John Crown, Private Investigator,” a show that ended twelve years ago and left Bell struggling to find parts. It’s part not too far off of Savalas himself, as “Kojak” (a CBS show) had been off the air for eleven years when DETECTIVE aired, and his filmography in the intervening years wasn’t exactly a stellar one, mostly consisting of TV show guest parts, and TV movies along with supporting roles in genre oddities like Matt Cimber’s Pia Zadora vehicle FAKE-OUT and Lucio Fulci’s FACELESS. Unlike Bell, however, Savalas was at least riding a bit of a revival of his most noteworthy role with a series of “Kojak” TV movies that brought him in front of the cameras on a regular basis, so it’s doubtful that he was living on “the wrong side of Sunset” in Los Angeles, slugging down booze from a flask at every opportunity.

Bell looks at his down-and-out nature with good humor, however, narrating the films’ events with a morbidly upbeat sense of humor, even as he attempts suicide by gassing up his house (his stove was repossessed) while reciting Hamlet’s soliloquy after he loses the part of an Irish priest because the studio thinks audience can only see him as a detective. We know it’s all going to turn out fine — the film begins like a more-optimistic SUNSET BOULEVARD, with a shot Bell being rushed to the hospital and then energetically going into how he got there by voice-over, explaining that he never did a medical show because “the hospital victims don’t get any good lines.” 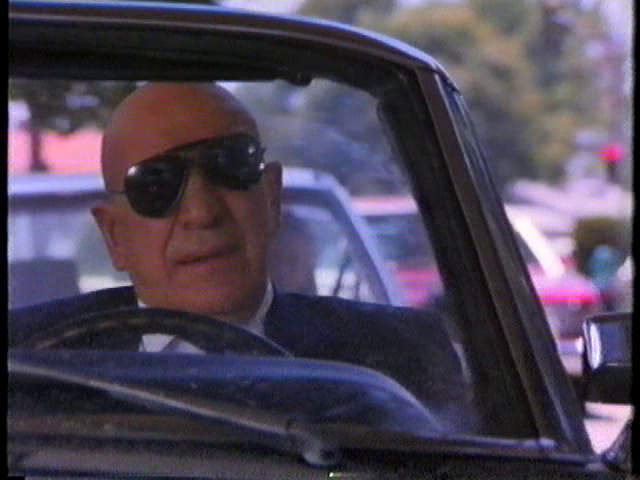 And indeed, Bell’s suicide attempt is interrupted by a visitor in the form of a spunky fruitcake with multi-colored hair with the unlikely name of Lois Wednesday, played by MY BLOODY VALENTINE‘s Helene Udy. Wednesday is looking for her boyfriend Richard who has disappeared on business, and seems intent to hire Bell even after he tells her that he was just a television detective and has no real skills. Wednesday won’t give in, and Bell is desperate for money, so he offers her a rate of $100 a day and takes the case.

The case leads Bell down a series of loose ends, and his paths are stalled by the likes of his former writer friend Eddie (William Bassett) being caught in a “thousand mile stare” and his show’s police adviser (Tom Reese) who tells him he can’t operate without a license. It begins to look like Wednesday is just a nutcase with a weird detective fetish and that her boyfriend never existed, and when the trail to nightclub owner Jerry Brazil (Joe Dallesandro) turns up empty, it looks like a waste of time — until Bell starts getting tailed and ends up getting framed for murder. 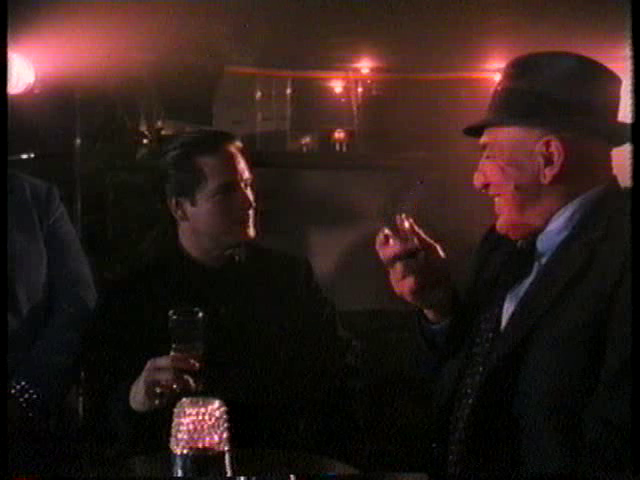 If the general idea of a former TV detective being lured into the real-life work of crime sounds familiar, it may because it was used a couple of years later in “Lookwell,” Conan O’Brien and Robert Smigel’s failed pilot for a series starring Adam West in a similar role. Beyond the general idea, however, “Lookwell” and HOLLYWOOD are two very different beasts — “Lookwell” is a screwball comedy about the ridiculousness of West’s character, where THE HOLLYWOOD DETECTIVE, written by Christopher Crowe (writer of Michael Mann’s LAST OF THE MOHICANS, and someone with a familiarity with the world involved as a former “Baretta” writer”) and directed by MOTEL HELL‘s Kevin Connor (who did similar duties on “Hart to Hart” and “Partners in Crime”) has a compassion for the lead character, with Bell emerging as a genuinely sympathetic guy with a great sense of humor even if he doesn’t always make the best decisions.

The mystery in question is actually quite good — the plot swerves and swings around like a solid piece of ’70s-era neo-noir, and moments in the first act that seem like off-the-cuff jokes pay off in the third, and we even get a chase down the Los Angeles river in Bell’s Mustang convertible! Crowe’s script gives the characters some clever dialogue, and the supporting cast of character vets (including George Coe as Bell’s agent, who wants him to appear in porn — perhaps an offhand wink to Cameron Mitchell’s role in DIXIE RAY, HOLLYWOOD STAR) give the film a polish that moves it well out of the TV-movie realm. 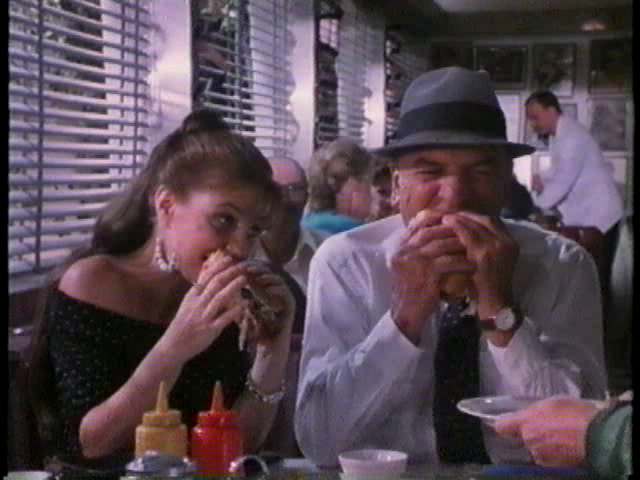 The best moments, however, are reserved for Savalas himself, and his performance gives DETECTIVE its heart. Savalas is perfect, chastising a cop’s interrogation technique with “I saw that picture, and you’re both clichés!” He also seems to be having a lot of fun, and I would have loved to have seen this turn into a series, which was apparently the intention.

THE HOLLYWOOD DETECTIVE always keeps its tone relatively light, even when there’s murder going on, thanks to fun performances and a solid score from Arthur B. Rubinstein. It is, in a word, “charming,” the sort of pleasant, likeable way to spend an afternoon with some characters and situations that feel like old friends. 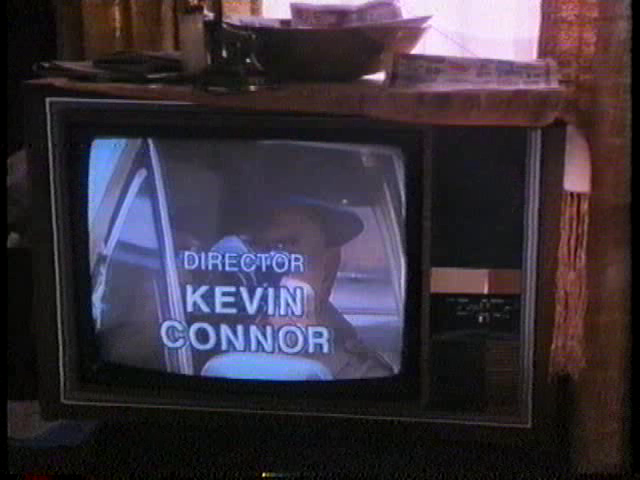 Unfortunately DETECTIVE never went to series, though years later that the quirky detective character became USA’s bread and butter, so you could think that the film made some sort of impact in the long-term — hell, the channel even produced an already-forgotten “Kojak” remake in 2005 starring Ving Rhames! As the channel slowly shifted into making more thrillers and supernatural horror films, the sense of humor present in DETECTIVE became abandoned, and it’s a shame — DETECTIVE proves that you can make a very entertaining flick within the boundaries of a made-for-television film’s budget, cast and content.