Home  ⁄  The Wire  ⁄  IT’S THE DAILY GRINDHOUSE 2018 HORROR ADVENT CALENDAR! ‘CHRISTMAS EVIL’ IS OUR LUCKY 13TH FILM OF THE MONTH! 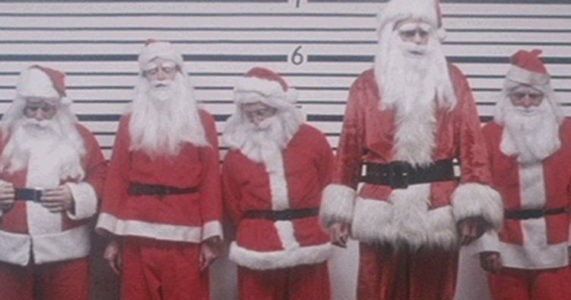 Who doesn’t love an advent calendar? Around the Daily Grindhouse virtual offices, we decided the only way to make the advent calendar better is to replace what you might traditionally find behind the door with Christmas horror movies! So everyday from December 1st through to Christmas, we will be highlighting a different movie for our horror-loving readers to celebrate the season. Our film for Day Thirteen is CHRISTMAS EVIL! 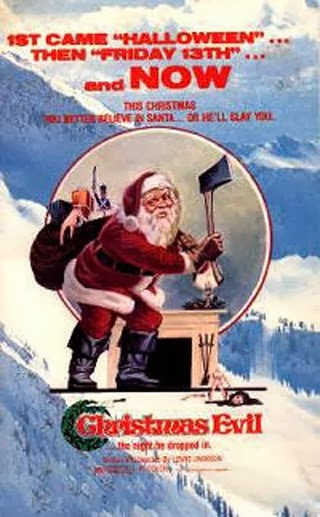 Christmas Eve. 1947. The stockings are hung by the chimney with care, and this time mom is with the kids peeking through the banister to see Santa himself. After a classic cookie-eating scene by the man in red, little Harry Stadling argues with his brother Philip afterward whether Santa was actually their dad or not. (Please note that this is a legitimate argument as he somehow managed to zoom up the chimney.) Young Harry sneaks down for some evidence and sees a little more than mommy kissing Santa Claus. The kid instantly mentally breaks against the world, but not Christmas, as we fast forward to present day with Harry, now grown up and played by Brandon Maggart (Fiona Apple’s dad!) waking up in Santa pajamas to Christmas carols every single day. Talk about immersion therapy! 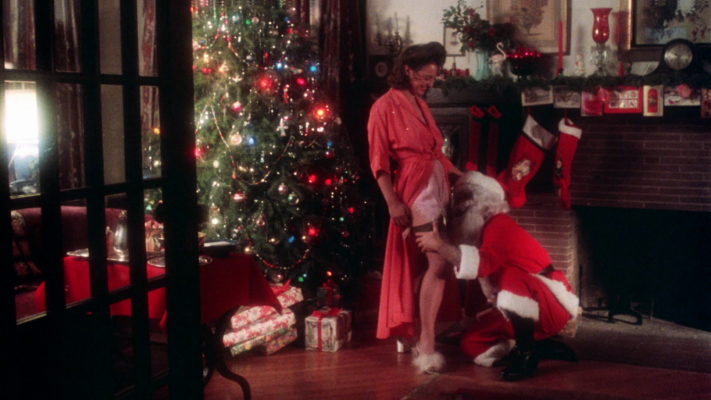 Harry Stadling is obsessed with Christmas—especially Santa Claus—to the point where he’s basically a Yuletide doomsday prepper. As super fan of the film John Waters said, it’s almost about a sex change, but instead, it’s a man wanting to be Santa Claus. Getting into the Santa suit is almost like drag or a fetishistic costume here, except the holiday entertainment aspect Harry hides behind thinly veils the psychosis that’s really running the show. It’s as kinky as it is tender as it is sad; toys are for making and keeping but always, always for respecting. Harry never looks more dead on his feet than when he has to wear a corduroy suit to work and carry groceries home, and he’s never more alive than when he’s a-tinkerin’ and wearing his favorite primary color.

By day, Harry reconciles his normal adult life and his secret Christmas mania by working at the Jolly Dream toy factory. He’s living in the sludgy, cynical adult world of 1980 New York City, though, and the phony conversations and everything else that’s aggressively non-magical wears on Harry bit by bit, building to our killer climax. Until then, though, he’s a mostly sympathetic character with a few stress fractures: The only seriously unsettling thing (besides being the sentient embodiment of one of those year-round Christmas stores) is how close an eye he keeps on the neighborhood children (his “little darlings”) to keep tabs in his very own Naughty or Nice book–and there’s a fresh one every year. That, and his sleigh is a creepy van, but this was 1980. There are thankfully no pedophilic undertones even with all that going on, so the movie sidesteps a lot of sleaze it might have otherwise tripped in. 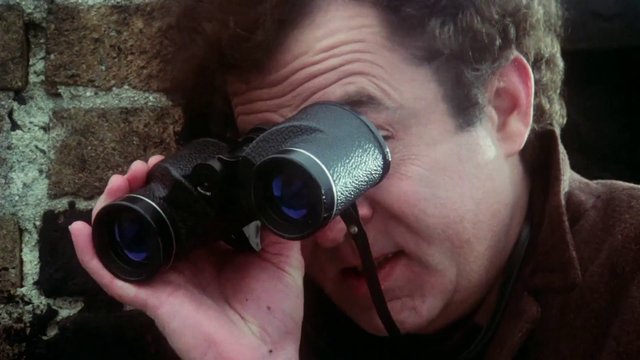 It all comes to a head at the wood-paneled company Christmas party, though, when Harry’s informed that their policy of donating toys to a children’s hospital isn’t quite as generous as he’d like. In a fit of festive vigilancy, he steals from the company’s toy line, and there’s no turning back. In a scene that mixes joy, fear, confusion and then tearful acceptance as well or better than any of your A-list big budget movies, Harry finds he really and truly can’t take his Santa beard off… and that’s where all the preparation comes to fruition. “I’m him.” Harry is dead, long live Santa! The lead character has the same sincerity in his mission as Ralphie did when he set his sights on the Red Ryder BB Gun. He’s as excited as a child when he sees Santa in the big parade. God, best friend, icon… secret lover? This ain’t your grandpappy’s cultural icon! 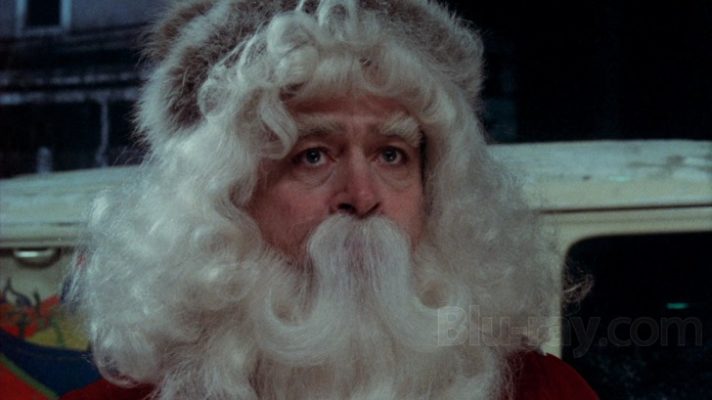 Either panned terribly or completely ignored on its initial release as audiences were expecting a more traditional holiday slasher in the HALLOWEEN vein, Lewis Jackson’s CHRISTMAS EVIL (aka AND ALL THROUGH THE HOUSE) found renewed appreciation in subsequent holiday showings on 42nd Street. Today, of course, we’re a generation of Christmas horror movie maniacs, and multiple releases on disc have made this a staple for those of us who aren’t only used to seeing killer Santas on the covers of films, but we practically demand them like they were eggnog at a holiday party.

Of this now-crowded subgenre, though, this weird little tale stands out not only being the first full-length killer Santa horror movie, but for me, it’s also as pure as it is grimy. Sure, some people get killed, but he goes out of his way to bring toys to the children’s hospital before the carnage! There’s even a Santa line-up at the police station where they need to recite their “Ho-Ho-Hos”, and it’s as perfect a scene here as it would be in any of the better National Lampoon movies. There’s also a scene of Santa being chased by people wielding actual torches, so this really has something for everyone, naughty or nice. 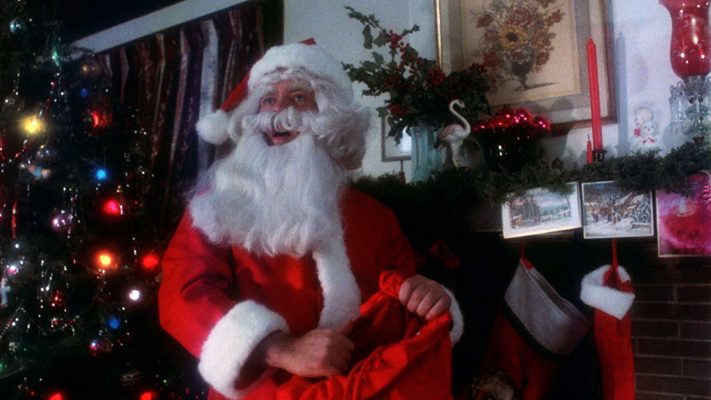 Harry’s end began with his family, and the film has them end it in a heartbreakingly realistic scene. Don’t worry, though: the final few frames of the ending are legendary, insane and strangely adorable, which is a holy trinity if I’ve ever heard of one. It’s maybe one of the most tonally jarring codas to any movie, and it only adds to its weird wrapping paper sheen.

There’s no real question that CHRISTMAS EVIL is an exploitation film, but it’s one of the rare ones that’s even more concerned with mood and pathos than nudity or blood. It’s a lot of fun, but it gives you a whole dinner instead of just the cookies. It’s about the death of innocence and the fury against the mundanity of the lies of adulthood. You know, for kids!

CHRISTMAS EVIL is currently on Shudder and is on DVD and Blu-ray from Vinegar Syndrome. 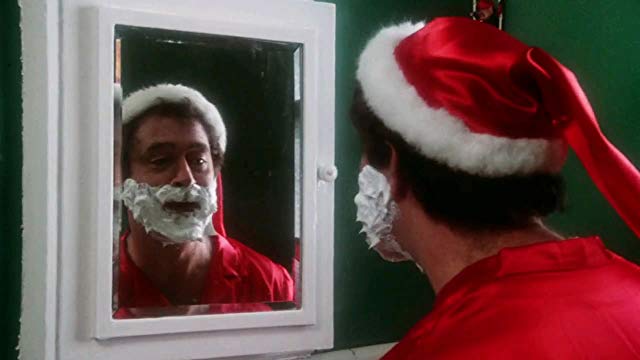