Home  ⁄  The Wire  ⁄  IT’S THE DAILY GRINDHOUSE 2018 HORROR ADVENT CALENDAR! ‘JACK FROST 2: REVENGE OF THE MUTANT KILLER SNOWMAN’ IS OUR NINTH FILM OF THE MONTH! 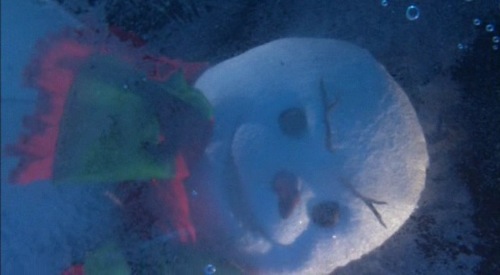 Who doesn’t love an advent calendar? Around the Daily Grindhouse virtual offices, we decided the only way to make the advent calendar better is to replace what you might traditionally find behind the door with Christmas horror movies! So everyday from December 1st through to Christmas, we will be highlighting a different movie for our horror-loving readers to celebrate the season. Our film for Day Nine is JACK FROST 2: REVENGE OF THE MUTANT KILLER SNOWMAN! 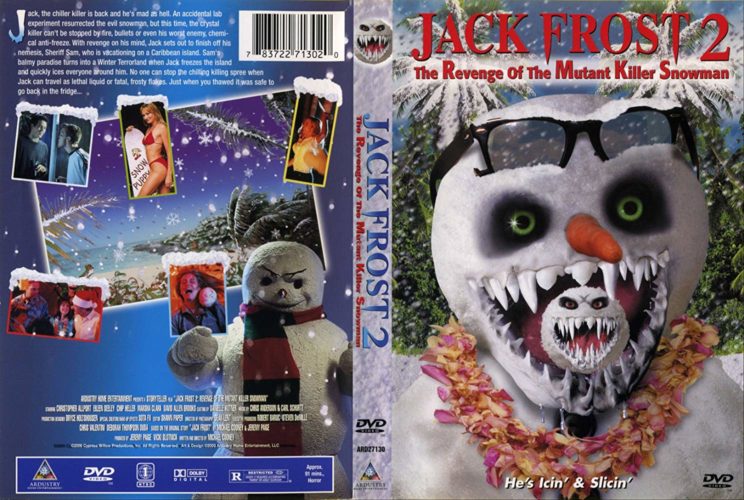 DTV horror flicks rarely got sequels back in the nineties. Sure, you had THE FEAR, THE DENTIST, or LEPRECHAUN that got follow-ups, but I remember a lot more terror tapes promising sequels we never got. I presume that the first JACK FROST got enough good marks and made just enough bank to warrant returning for some frosty antics. I don’t know why it took me so long to get around to 2000’s JACK FROST 2: REVENGE OF THE MUTANT KILLER SNOWMAN. I legitimately liked the original back when I saw it in 1997. I vaguely remember that they made a sequel a couple of years later, but never got around to it, but it was not out of disinterest. And now here we are, eighteen years later, and I’ve finally bestowed upon it a first time watch for this DAILY GRINDHOUSE Horror Advent Calendar. And frankly, I enjoyed it quite a bit, even with some of the problems I ultimately had upon my viewing.

JACK FROST 2: REVENGE OF THE MUTANT KILLER SNOWMAN picks up a year after the Snowmonton Mistletoe Massacre, as Sheriff Sam Tiler (Christopher Allport) goes on vacation to a tropical island with his wife Anne (Eileen Seeley) to attend the wedding of his deputy Joe Foster (Chip Heller) and his droll assistant Marla (Marsha Clarke). Elsewhere, a sinister institution (’cause who else?), digs up the antifreeze bottles storing Jack Frost’s remains and using genetic tampering, bring him back to life to cause havoc at the sunny resort. 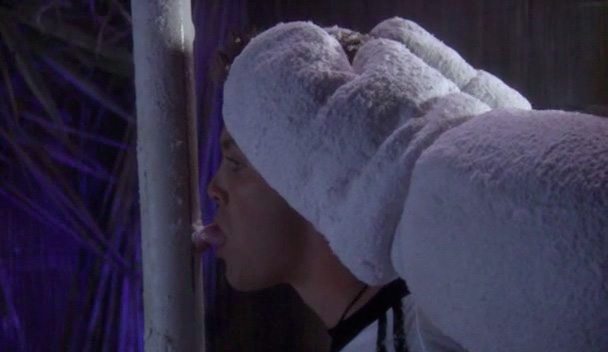 An initial thought I had starting the film up was: How is this going to work with a tropical locale and a killer whose entire being is made up of ice–you know–that thing that melts in the sun (or after sitting on a kitchen countertop for a few minutes)? The film does a respectable job of sidestepping this matter by having Jack freeze the island and turn it into a winter wonderland, an element I wish the film had gotten to a little sooner, because then we get a practical effects bloodbath unleashed on us rather than a film that has a serious lack of energy up until that point.

The film maintains an admirable level of continuity–owing to Michael Cooney returning as writer/director–from Sam’s post-traumatic stress disorder being a thread throughout the film, the union of Joe and Marla (who were courting in the first film), and the return of the droll, enjoyable Agent Manners (David Allen Brooks taking over for the first film’s Stephen Mendel, his new appearance hand-waved away by a Dr. Loomis facial reconstruction surgery device). 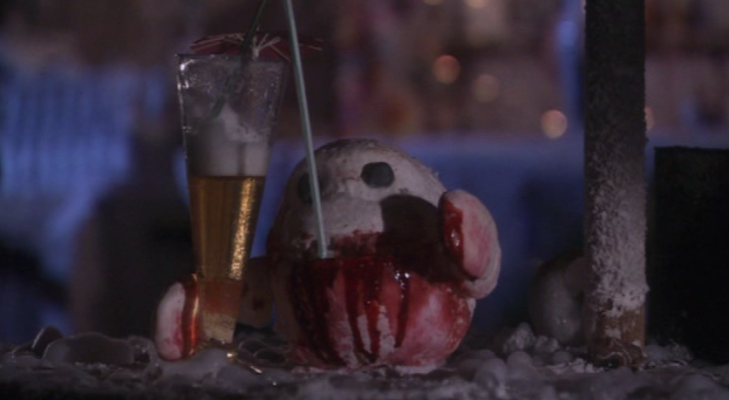 What I like best is that the film quickly resorts to trying to kill Jack in the exact same manner as they did in the previous film, but having it fail almost instantly, leading to the survivors thinking up new ways to fuck Frosty up. The new wrinkle to the film, as it were, is that Jack gives birth to little snowballs that go on their own rampage–which bizarrely puts Jack to the sidelines in his own film (a budgetary reasoning, I’m sure). The method behind taking Jack out is silly as hell, but at least they try to give it a rational train of thought, it’s still sci-fi mumbo-jumbo (blood and anti-freeze mixing together to give a link between the Sheriff and Frost), but it’s at least logical mumbo-jumbo. And the characters retain agency, moving to caulk the cracks in the door to prevent liquid based Jack from slipping in.

The film departs from its predecessor’s slasher leanings and dives full bore into comedy. Whether or not it’s actually funny, depends on your opinion of what’s humorous. Interestingly, I noticed unintentional similarities to CLUB DREAD right at once, what with the location (a tropical resort), the characters (a bumbling owner and his put upon dreadlocked sidekick and a “fun” officer), and the grizzled veteran who get his ass handed to him by the murderous menace plaguing our heroes. There are some absolute misfires in the humor, namely with Frost himself (those one-liners just aren’t going to be funny to me). But there’s some humor to be had with the actors bouncing lines off of each other (Manners and Sheriff Sam have a good comedic rapport–“Gave myself a leave of absence.” “Oh, they fired you?” “Canned my ass out the door.”), and the fact that the staff of the resort seem to care so little that people have been massacred on their property. 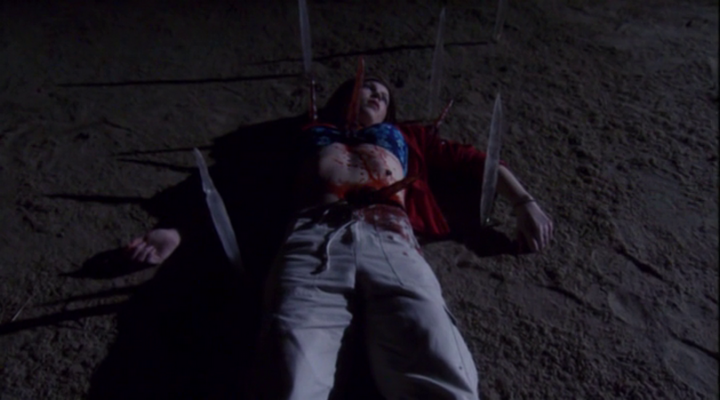 I have a great appreciation for the runty efforts put forth by JACK FROST 2: REVENGE OF THE MUTANT KILLER SNOWMAN, but there were still some pain points I had. The look of the film leaves a lot to be desired because the first JACK FROST looks like an actual film, shot on the cheap, but at least it’s got the grain and heft of something shot on celluloid. Because the budget for part two was literal pennies, (there are all of eighteen people at this resort), it was filmed on video and it gives the film the look and lighting of a lost Undressed episode that did a Halloween episode one year. It becomes easy to ignore the picture quality after a while, but it’s especially jarring after seeing JACK FROST 2 and the first one back to back.

The cheapness may turn a few away–the laboratory set looks like an outtake from Beakman’s World–but sometimes you have to get your film made, regardless if you have cash in the coffers or not. There’s also no sense of Jack’s physical being in the film–he’s a sentient ice cube and carrot stick at one point? At least it gets fixed later on as the film winds to its middle. The death scenes don’t have that grisly “realism” that the original had, meaning they’d be something approaching a realistic death. Save for one death that actually is pretty harsh (Jack freezing the pool and the woman drowning underneath the ice) more often than not, we’re approaching gonzo Troma levels of gory kills. I’m not turning my nose up at Troma, I often enjoy their ribald sense of filmic madness, but at least they’re a notch above some of the poorly edited kill scenes we get here (seriously, that photo-shoot scene is REPELLENTLY bad).

JACK FROST 2: REVENGE OF THE MUTANT KILLER SNOWMAN is no great shakes, but it’s chock full of goopy slayings, gratuitous nudity, good old humor, and is genuinely unashamed of what it is. Call me crazy, but I had some fun with it. Additionally, I hope that Cooney gets to make his long-gestating third entry JACKZILLA, despite the passing of franchise star Charistopher Allport. There’s a clear sense of passion and heart buried beneath Jack’s icy layers. It’s just the budget that always gets in the way. 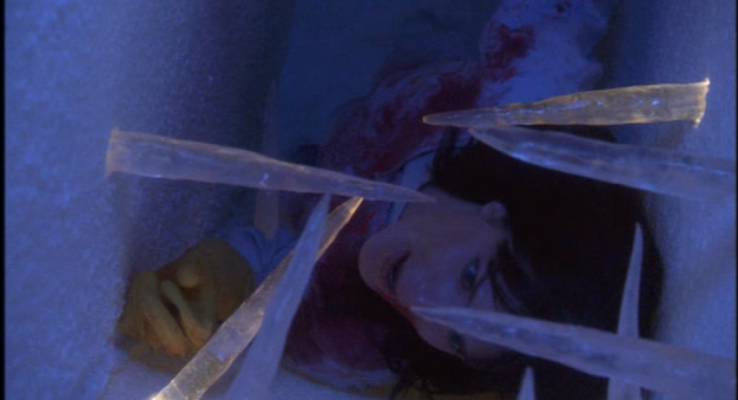