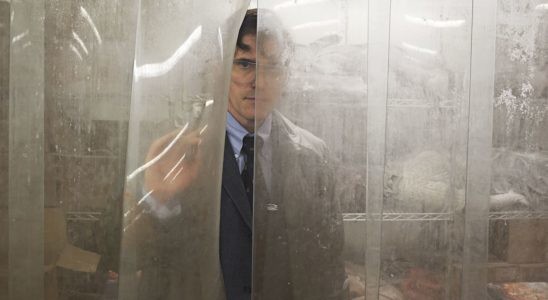 Lars Von Trier is an asshole. The director would probably admit as much himself. He’s made a career out of being a contrarian and provocateur, of making movies that are aggressive in their nihilism and despair, of revelling in his appellation as cinema’s leading enfant terrible. He’s been obliquely accused of sexual harassment by Bjork during the filming of DANCER IN THE DARK, and he got banned by Cannes for his sympathetic remarks on Hitler in 2011. He performance arts as a jerk for the media. Yet he’s also someone who has been open and forthright about his shortcomings, his well known self-loathing and struggles with depression and anxiety. And in THE HOUSE THAT JACK BUILT, we find Von Trier in conversation with himself, confronting the worst impulses in his psyche and in his art, all through the guise of a serial killer thriller.

Whether or not that’s something you’d want to subject yourself to depends on your mileage with Von Trier’s brand of confrontational cinema. In short order, the film is something of an abrasive masterpiece, and quite possibly the director’s best film; on the other hand there has to be an asterisk appended to that designation, as this is also something of a challenging, disturbing, and wholly problematic work of art. Von Trier has made a film overflowing with ideas and philosophical wrestling, wherein scenes of genuinely uproarious dark comedy clash against scenes of utter reprehensibility, as those then crash up against scenes of poetic beauty that are self-indulgent in the most gorgeous ways possible. Through it all is a thread of autocritique that could be construed as Von Trier owning up to his worst faults, using a visual medium to thoroughly deconstruct and obliterate his self-built mythos….or as complete horseshit, a clothesline that allows the director to get away with the same things he’s long been accused of peddling, only with a thin veneer of apologia to excuse himself. Frankly, both ideas are perfectly valid.

Von Trier has long had a habit of filtering various film genres through his own dark, depressive, cynical world view, whether it be end of the world science fiction (MELANCHOLIA), Busby Berkeley musicals (DANCER IN THE DARK), even porn (the two volumes of NYMPHOMANIAC, with their digitally superimposed scenes of unsimulated coitus). Von Trier does not make happy films, to say the least, and he often likes to subject his, usually female, protagonists to the trials of Job; his films punish the audience by punishing their leads. That’s gotten Von Trier a reputation for hating women (while others have said that he is actually empathetic to their plights, showing how corrosive the world can be on them) and he’s not going to do himself any favors with THE HOUSE THAT JACK BUILT.  Here, he’s filtering his style through the lens of a serial killer slasher film, and one can only imagine the kinds of depths that Von Trier, with his penchant for didactically gleeful sadism, goes in delivering on the gruesome promises of that genre.

Here, he’s working in the HENRY: PORTRAIT OF A SERIAL KILLER mode of such stories, forcing the audience to spend time in the head of a chillingly unempathetic everyman psycho. Except he’s really actually making LARS VON TRIER’S BRET EASTON ELLIS’S AMERICAN PSYCHO. The movie is an in-your-face, blood-soaked satire with heaping doses of malevolently ugly misogynistic violence. Except the target of the satire is Von Trier himself. The director knows his corrosive button-pushing style is out of step with the times, and in interview after interview, he’s painted himself as a man burdened by the crushing weight of his own demons. With THE HOUSE THAT JACK BUILT he’s undergoing a personal reckoning, confronting the very things he’s always been accused of.

THE HOUSE THAT JACK BUILT is a film divided into five parts–or “incidents”–and an epilogue, tracing the life of the eponymous serial killer from first kill to capture, each incident centered around one of Jack’s most representative kills (out of 60 or so.) Matt Dillon plays Jack, and he’s a marvel, the former heartthrob tearing into what may be the best performance of his career. Jack begins as a sort of awkward homicidal nebbish, whose OCD comes into ironically hilarious conflict with his desire to murder. He’s the serial killer as pathetically banal accountant. The more he kills, though, the looser and more confident he gets, and he eventually starts courting the press as a smirking, art-obsessed madman who dubs himself Mr. Sophistication. The more he kills, the better he gets at approximating a visage of human normalcy, before that begins to crack under the weight of his own sociopathic impulsiveness. Throughout the film, there’s the hint that Jack wants to get caught, that he wants to rub his nose in the inefficacy of the police, that he desires capture–not out of remorse, but out of playfulness, out of seeing how long he can keep the charade going, growing increasingly and intentionally messier–and nastier–as he goes along.

The first incident features Uma Thurman as a harridan hitchhiker who gets picked up by Jack, taunts him about whether or not he really is a killer, and gets a broken jack to her face for her troubles, becoming Jack’s first kill. It’s an aggressively brutal and sudden attack of an opening scene, and it segues into the second incident, with Siobhan Fallon Hogan as a widower who makes the mistake of letting Jack into her home, acting as the second victim. It’s here that Von Trier unexpectedly turns his film into an uproariously hilarious, perverse dark comedy of errors. He treats this sequence as a kind of cheekily grim knockabout farce, and primes us to expect more of that from the rest of the film (and there is some more of that comical absurdity in the latter stages), becoming what is the equivalent of Lars Von Trier going “light.”

He’s  just implicating us in his own self-demonization, as well. THE HOUSE THAT JACK BUILT gets considerably darker from there–the fourth incident with Riley Keough as a slow-on-the-uptake ditz who represents the closest thing to love that Jack can muster, but which does not prevent her from being subject to Jack’s cruelest and most anti-woman kill, pushes the film into scenes of damn nigh unwatchable vicious cruelty–and Von Trier seems to be rubbing our face in all that outre nastiness. He seems to be saying, “you want a Lars Von Trier serial killer movie? You want to come into the cathedral that is the cinema to see that kind of thing? Well here’s your Von Trier serial killer movie. Enjoy.” It’s clear that Jack is meant to be an avatar for the director–the uncaring psychotic id that both he and his detractors see him as. Jack envisions himself as something an artiste, staging and reshaping his kills as works of obscene truth and beauty, but he’s also presented as a vacuously pretentious one–egotistical, narcissistic and blatantly oblivious to the effect his art has. In his mind he’s the one true prophet, but he’s really just a woman-hating “incel” with delusions of grandeur.

Von Trier’s other avatar is Verge, a largely unseen interrogator who spends the movie, going back and forth with Jack over his acts and philosophies. He’s played by the German actor Bruno Ganz with a wryly seen-it-all skepticism, acting as Von Trier’s  conscience. He’s the one who calls Jack–and, by extension, the director–out on his bull.

Of course, whether or not you are willing to buy all this, or just consider it evasive malarkey, depends on one’s own relationship to the director. The cumulative effect of THE HOUSE THAT JACK BUILT is one of a masterpiece. It’s thematically and philosophically dense, at times deeply funny, acted with intense dedication by its cast, and loaded with large amounts of effectively creepy horror imagery (including an image of a hauntingly reconstructed taxidermied face.) But it’s also a willfully ugly and grotesque film, rich with punishing, triggering imagery. The film’s epilogue, Von Trier’s pithily beautiful take on Dante’s Inferno definitively places the troubled Dane on the side of his critic, and feels like the culmination of all his strengths and weaknesses as a director. But not everyone will buy that. And that’s what makes THE HOUSE THAT JACK BUILT such a striking, fascinating and, ultimately, haunting film to watch.