Home  ⁄  The Wire  ⁄  ‘SPIDER-MAN: INTO THE SPIDER-VERSE’ IS THE ULTIMATE COMIC BOOK MOVIE

Spider-Man has had a real roller coaster ride in the movies since Sam Raimi’s 2002 blockbuster finally introduced the character to the big screen. Within 15 years of that film’s release, Raimi directed two sequels before Sony rebooted the series with Marc Webb at the helm, and then Marvel managed to work out a deal with Sony to bring the wisecracking webslinger into their established Cinematic Universe for another reboot. This last bit of behind-the-scenes finagling also resulted in some odd splintering of Spider-Man’s corner of the comics world, leaving Sony an opening to create an animated film based on the character. Rather than take what has become a traditional approach for Marvel and DC—who have both made a number of direct-to-video animated features based on characters from their respective universes—SPIDER-MAN: INTO THE SPIDER-VERSE is aimed squarely at big-screen blockbuster status. It’s a bold gamble, but the payoff is possibly the ultimate “comic book” movie yet made.

Miles Morales (Shameik Moore) is a smart kid who’s just starting out at a new private school, and to blow off a little steam his uncle Aaron (Mahershala Ali) takes him to a seemingly abandoned underground facility to tag a wall with elaborate graffiti. Miles is bitten by a spider, which doesn’t seem like a big deal until the following day when he wakes up to some unexpected changes that can’t be chalked up to puberty. When he returns to the facility to investigate, he finds Spider-Man trying to stop Kingpin (Liev Schreiber) from activating a machine that can reach across parallel universes. Spider-Man manages to temporarily disable the machine, but not before a number of Spider-people from alternate dimensions are sucked into this world. Miles teams up with them to find a way to stop Kingpin’s plan from destroying the Multiverse and get everyone back to their own worlds. 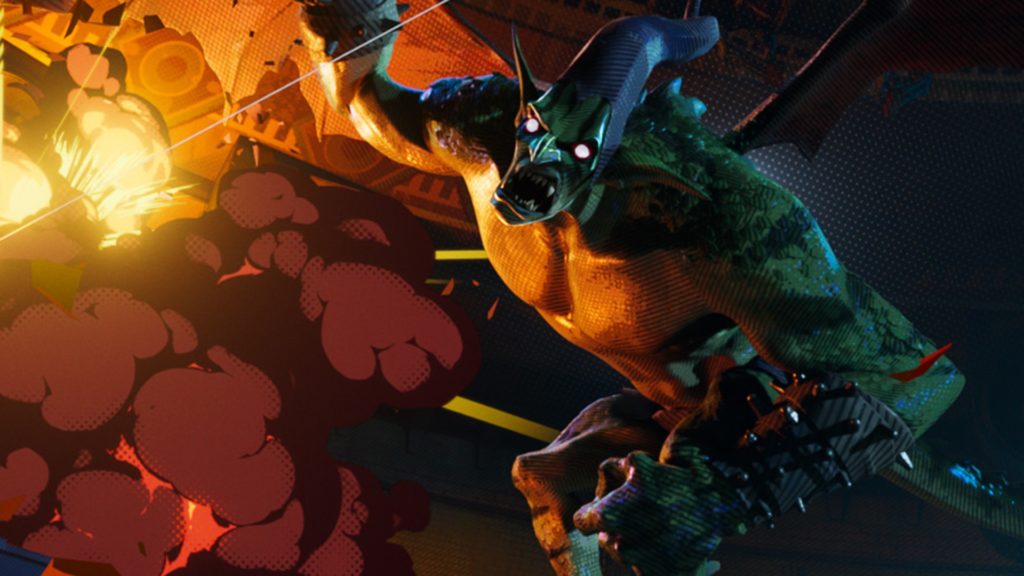 The idea of multiple universes has been used numerous times by comic book companies for various reasons, most frequently to retcon discrepancies in character histories or to consolidate diverging narratives from different titles when continuity gets too complicated. This concept was also recently used by Marvel for the “Spider-Verse” event series, which brought virtually every existing version of the character (and then some) together under one storyline spanning countless dimensions. Bringing even an abbreviated version of such an ambitious storyline to the big screen risked confusing audiences most familiar with the original Peter Parker Spider-Man character and stories, but thanks to some smart character selection and sharp writing, INTO THE SPIDER-VERSE handles this daunting task with deceptive ease. 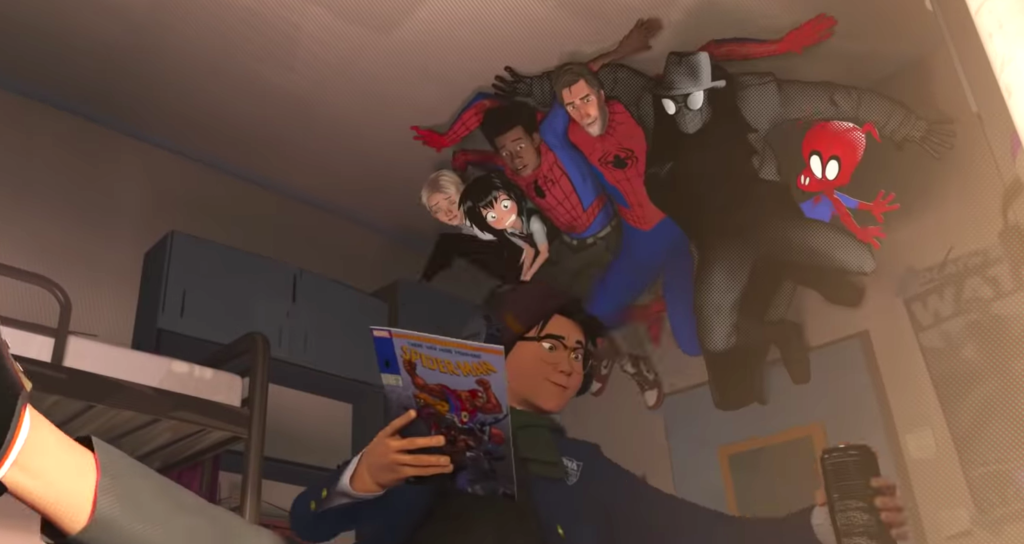 The selection of Spider-people takes full advantage of the animated medium in exciting ways. Miles, Peter Parker, and Spider-Gwen (Hailee Steinfeld) are all of the same dimension, but the other principal heroes each have a distinguishing visual style: Spider-Man Noir (Nicolas Cage) is black & white, Peni Parker (Kimiko Glenn) is straight from anime, and Spider-Ham (John Mulaney) is a “cartoon” complete with the ability to float through the air when he smells a delicious pie. The villains are also designed in a way that could only work in animation, with Kingpin depicted as a hulking wall and Green Goblin as a rampaging kaiju-sized monster. Throughout its running time, the film flirts with visual overstimulation with wildly imaginative set pieces and a truly spectacular end credits sequence that’s worth the price of admission alone. This is a film that absolutely needs to be seen on the big screen for maximum effect, one of those rare movies that genuinely feels like it’s pushing the medium forward in new ways.

But perhaps the most impressive feat of INTO THE SPIDER-VERSE is that it finds ways to flesh out its characters without slowing down the relentless forward momentum of its main narrative. Amid the warp-speed gags (the Lord Miller touch is unmistakable) and crazy action, elegant character beats humanize heroes and villains alike. There is a lot of information to process along the margins, but it never loses focus on the core story of Miles learning how to navigate his new powers and his day-to-day life. The relationships between Miles, Gwen, Peter, and Kingpin make for surprisingly compelling drama even while the universe is at stake. With that careful attention to character married to a truly unique visual style, quick wit, and deliriously inventive action, INTO THE SPIDER-VERSE arguably captures the spirit of a “comic book movie” more than just about any comic adaptation to date. It’s a rare feeling to look forward to spin-offs and sequels, but if future installments are even a fraction of how great this is there’s a lot to be excited about.