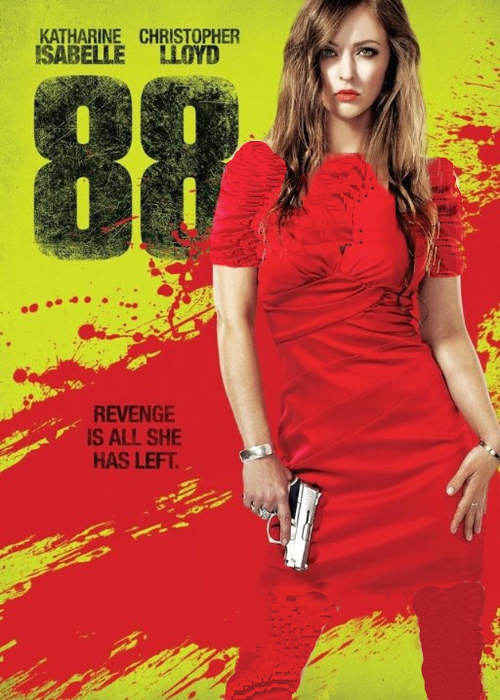 Katharine Isabelle has been building to cult-idol status for years. She’s got to be a role or two away from a breakthrough, particularly after her command performance in 2013’s AMERICAN MARY. That’s a movie you absolutely should see if you have the stomach for it. It’s a fairly extreme entry in the body-horror genre, but the scariest thing in it is Katharine Isabelle, and that’s meant as a tremendous compliment.

So I had high hopes for this movie, 88, a revenge thriller which pits her against the lovably weird Christopher Lloyd. But having seen it, I’m not quite as high on it as I was before. I’m deep in the pocket for female action films from female directors, and I hope it’s a behind-the-scenes trend that spreads like wildfire, but I wouldn’t be doing anybody any favors if I didn’t rate a movie on its own merits.

Again, she’s convincing in either mode — really, one hopes this is the start of a wave of very many films built around this particular star — but on the grander scale, the movie at hand feels like not much more than a pose. If you liked CRANK, you may like this (I’m the wrong guy to ask about that one), but otherwise, the wait continues for an action film fully worthy of this extremely talented actress.

Via the film’s official site, here’s where you can see 88 for yourself in its native Canada:

But in America you can get 88 on Blu-Ray already! Help us out! Buy through this link!