Being a fan of independent genre cinema can be rough. For every great undiscovered gem there are countless unimaginative, perfunctory exercises in exhausted tropes. It gets dispiriting after a while trying to sift through the dross of samey slashers, zombie movies, and more “found footage” movies than any one person could ever watch in a lifetime to find things that are truly worthwhile. When it happens, though, it’s a fantastic feeling and it can make all that effort seem worth it. Even in those cases, though, it’s rare to stumble upon something that is so spectacularly unique that it could only have been made by dedicated independent artists committed to a singular vision. That’s what makes a movie like ELLIOT something truly special — it’s a shot-on-video horror/sci-fi feature absolutely unlike anything else out there, and it’s a perfect example of what makes independent cinema so exciting. 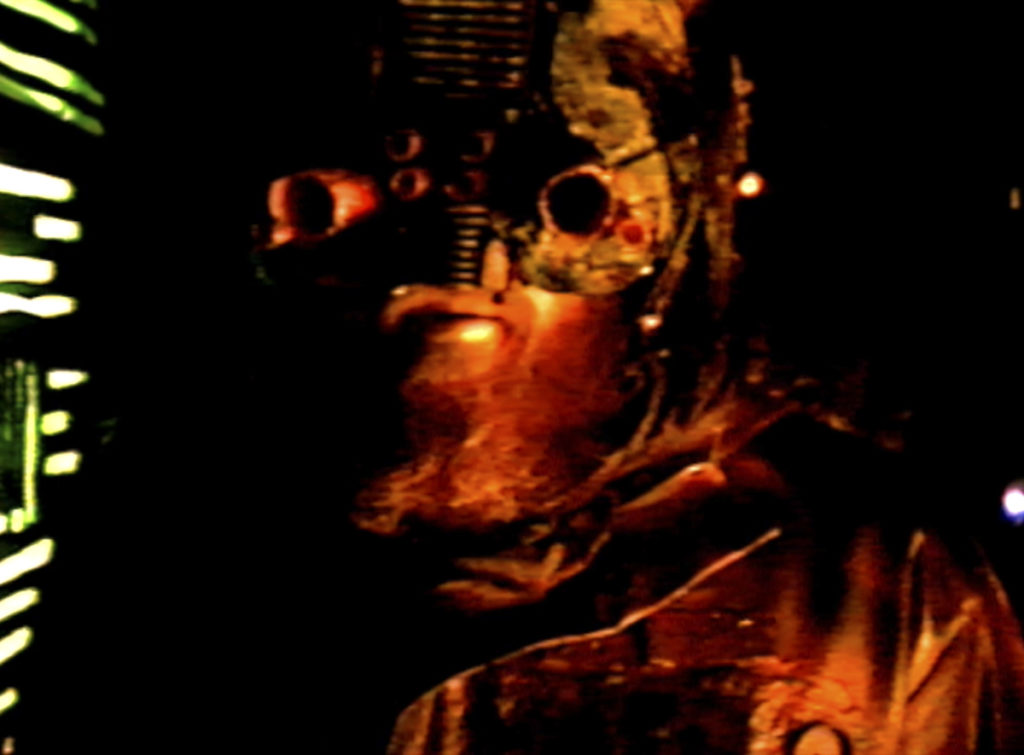 Elliot (Joshua Coffy) is a maintenance worker stationed deep in the bowels of a bizarre, labyrinthine biomechanical facility. He stays in a tiny room where an ominous manager frequently screams imperatives at him from a video screen, sending Elliot on endless repair tasks where he’s harassed by sentries who watch him constantly and keep him on task. When he’s not working, Elliot spends as much time as possible in a virtual reality world that is slightly less miserable than his real life. Instead of a bearded, harried worker drone, Elliot is clean-cut and refined (and played by writer/director Craig Jacobson) in the VR world. Crucially, he’s also not alone there: In addition to his Butler (Jay Sosnicki), there’s a dancer (Anna Muravitskaya) he likes to watch, and one day he accidentally ends up in an uncharted area with Bianca (Cassandra Sechler). Elliot and Bianca awkwardly connect over their shared loneliness and uncertainty about their bleak existence, but when they are suddenly separated Elliot has no idea whether he’ll ever see her again. Soon after, he strikes out on a quest through the facility to try to discover the truth about his life and the horrible world in which he lives.

There are plenty of independent movies that try to mimic the look and feel of 80s and 90s shot-on-video productions, but often this approach is used for simple cosmetic purposes. In ELLIOT, it’s integral to the aesthetic, which is so highly stylized as to teeter on the edge of experimental cinema. There are many moments throughout the film where it’s tough to tell what exactly the viewer is looking at, but in this case that’s an intentional choice on the part of the filmmakers rather than a technical shortcoming. Writer/director Jacobson and his collaborative team at Dreams for Dead Cats Productions have created a claustrophobic and thoroughly absorbing world, one where it’s frequently difficult to tell where its inhabitants end and its landscapes begin. The smeary video and garish lighting mimic Elliot’s perception of his hellish life, and when he takes refuge in VR the picture quality improves noticeably, providing a shorthand visual demarcation between the film’s two worlds. 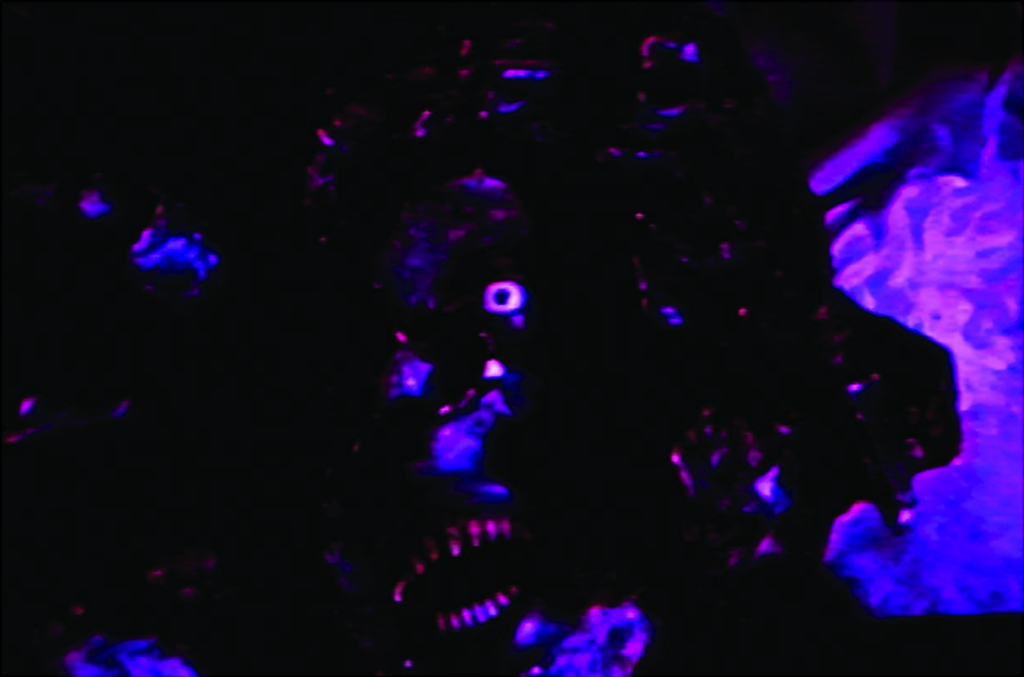 While the VR world is a little cleaner than Elliot’s “real” world, both of them are astonishingly realized with elaborate handmade sets and a multitude of impressive makeup and practical effects. Every inch of the world and the weird creatures that inhabit it create a convincing reality, and the spare writing gives the viewer tantalizing hints at a larger mythology at play. Also, other than a few relatively simple CG effects to embellish the tech of Elliot’s world, it is not difficult to imagine ELLIOT being produced in the early cyberpunk time period from which it draws much of its influence. The movie was not shot on digital and processed to look like late ’80s or early ’90s video, it was designed from the ground up to be shot on a camcorder. The influences here range from overt (it’s impossible to avoid thinking of Tsukamoto’s TETSUO: THE IRON MAN in comparison) to subtle but unmistakable (the journey through the facility and some specific shots recalling “The Zone” from Tarkovsky’s STALKER), but rather than a simple accumulation of references ELLIOT creates something entirely new from their synthesis.

All of this (not to mention the top-notch period appropriate score and elaborate sound design) would be enough to recommend ELLIOT anyway, but the film doubles as an arch commentary on the nature of online interaction between people who may or may not be who the person they present themselves as online. The tagline on the film’s official poster is “Innocence breeds cruelty in the realm of desire,” which may seem pretentious out of context but provides a pretty solid point of reference for reading what exactly the hell is going on in the film’s somewhat obtuse narrative. For all his (presumed) technical abilities, Elliot often behaves and seems to think like a child. In one scene, Elliot celebrates the small victory of a completed task with a goofy dance while a sentry looks on bemused and shakes its head. Unexpected bits of humor among the grotesque scenery of the film saves ELLIOT from taking itself too seriously, even when weighed against emotional scenes like his meeting with Brenda and the more horrific incidents that take place in the final act. 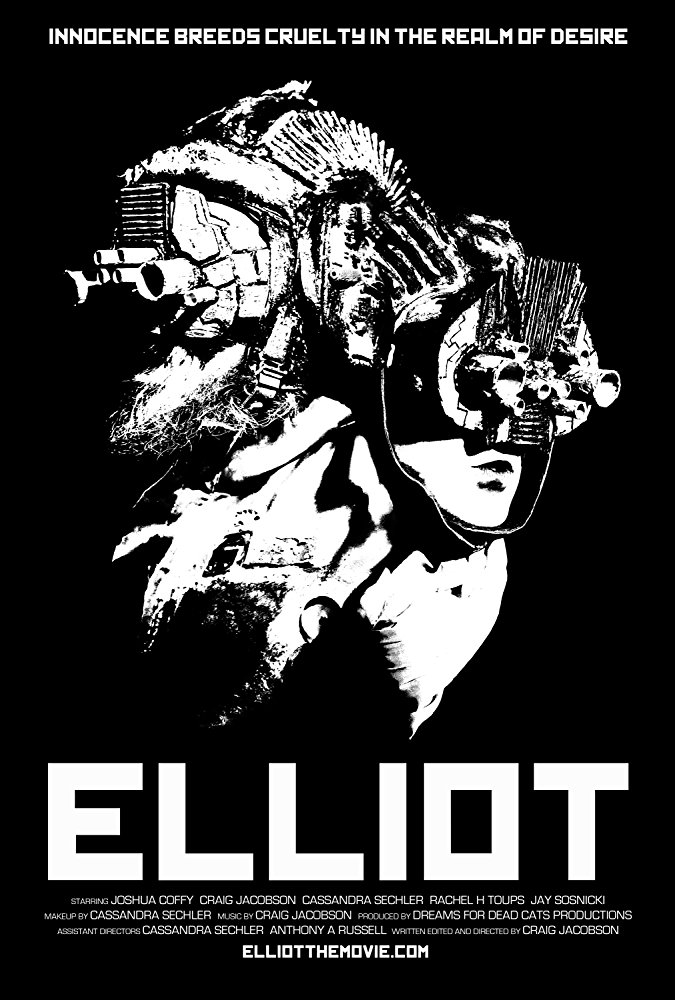 It’s early yet, but ELLIOT is certain to be one of the most impressively unique independent genre films of 2018. This is a bold, bizarre trip into some wild uncharted territory. There’s nothing remotely like it in genre filmmaking at any level from no-budget independents to studio pictures, and that may be the single most impressive thing about it. It also makes ELLIOT required viewing for adventurous genre fans, and it sets a damned high bar for whatever Jacobson and Dreams for Dead Cats Productions may do next.

ELLIOT is available now on Vimeo VOD. Check out the film’s official site to buy a copy on DVD, get the full soundtrack, and more.