Home  ⁄  The Wire  ⁄  [INTERVIEW] Brea Grant of BEYOND THE GATES

You may be familiar with actress Brea Grant from her roles on such shows as HEROES, DEXTER and FRIDAY NIGHT LIGHTS, but she has been steadily carving out a name for herself in independent horror. Most recently she stars as Margot, one of the main characters in the enjoyably retro BEYOND THE GATES, sucked into playing a VCR board game beyond her control.

DAILY GRINDHOUSE: You’ve been doing a number of horror films lately, do you consider yourself a scream queen?

Brea Grant: I feel like maybe the time for the term “scream queen” has passed. It was more of a term of the 80s and 90s. I consider Barbara Crampton, who is also in the film, to be a scream queen. I would be honored to be called one, but it’s like being punk, you can’t call yourself that, someone else has to call you that.

I do other stuff too, but I love doing horror movies. I had a meeting the other day and a guy asked if I was scared I was going to be pigeonholed and I said “no, I’m not scared”. The worst thing that can happen is I get pigeonholed into horror movies and I get to make horror all the time and that would be awesome.

DG: Is there a tight knit horror community in LA?

BG: There is a tight knit community. Graham Skipper, who is in the movie, I’ve done several movies with him and 3 of the 4 times we were each other’s romantic love interest. I’ve done a movie with Barbara (Crampton) since BEYOND THE GATES as well and I hope to keep working with Jackson (Stewart), he’s a friend. It’s nice because I feel it’s a small community and we all work TOGETHER, so when Jackson decided to make this movie, I didn’t have to get to know somebody and what he was like, so it wasn’t like starting from the beginning. 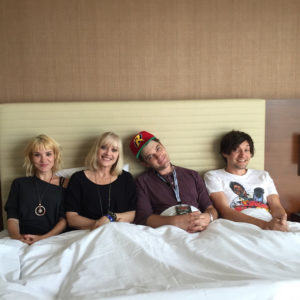 DG: Did you actually get to work with Barbara Crampton in this? Her character is basically hosting the game through the tv.

BG: No, I didn’t work across from her, although we are working from the actual video. For those who haven’t seen the movie, she is the host of this VCR board game, we’re playing it and watching her and we actually are watching her on the screen and doing all of those things so it was kind of very creepy. She’s also a producer on the movie so she was there quite a bit and I’ve known her socially because the horror community is a small place.

DG: One of the things I liked about this movie is it is very not mean spirited. It’s a fun film about family and redemption. Was that a conscious decision that you wanted to be part of a movie like that?

BG: No one has really said that but I have had people ask me if I think this movie has hit the cultural consciousness in a way, it’s really hit for an indie movie that people really LIKED it. Maybe that’s why, maybe because it has blood and guts and scary moments, but at its core it’s a movie about family and about doing what you think is right. I think that is really important. When I read the script, Jackson was making a movie so of course I was going to go do this movie, but also it did have heart in a way that a lot of times people forget that’s why we get into making movies. I watch movies a lot of times for escapism. I want to see something cool but I also want to relate to these characters in some way, and I think that’s what this movie achieves is very relatable characters. 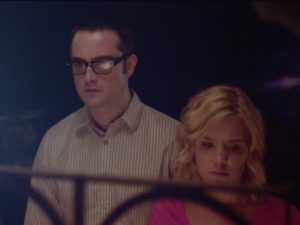 DG: Margot is very sensible and you can also tell she’s very good natured. She knows Gordon is having problems with his brother but she is still very welcoming when she meets him, and she’s very forgiving. Is it rare to find a female character who is so capable and just a kind person?

BG: We talked quite a bit about it that Graham’s character is coming form a darker place and we find out things about him that are kind of dark, and you know how you meet someone and then you meet their significant other and that person is really cool so you think “well this person has to be cool because I’ve met his girlfriend and she’s rad, so he’s got to be rad if she’s gonna put up with him”. That was my idea was that Margot should be easygoing and up for anything but also logical with a good head on her shoulders, to be the kind of girlfriend you want to have around. That makes Graham’s character, the lead of the movie, much more likable.

He is a recovering alcoholic, from his brother’s point of view he abandoned the family, to give Graham this character of a rad girlfriend makes him a more likable character. Not like Margot doesn’t have stuff of her own, she’s an independent character especially for a horror movie.

DG: Well she has sleep disorders

DG: This is Jackson Stewart’s first feature film, he had worked in tv before. Since you have directed before —BEST FRIENDS FOREVER—did you have any advice for him?

BG: No one asks me for my advice directing! Because I have directed I am much more sympathetic to directors and especially first time directors because I know how chaotic it feels and I know how stressful it feels and when you think “oh my god was that the worst day of my life, did I just screw up everything?” and I think for me I try to be very easygoing since I’ve directed and I’m open to whatever and talking about things and bring my A game every day. Not that I didn’t do that before, but I honestly take it a lot more seriously since I directed a movie. I take acting more seriously. But Jackson is very open to collaborating. he asked us all about character stuff and wanted feedback about the script. He still does, he’s working on a new film I will play the lead of, in theory, and he sends me new script all the time- “this is what I’m thinking, how do you feel about this, what are your thoughts on the character?” He’s very open and in that way has no ego, which is nice because I feel like a lot of first time directors put up a front in order to seem like they know what they’re doing.

DG: This movie is very much about nostalgia and the time of video stores, did you have a favorite video store growing up?

BG: I lived in a small town in East Texas and we had a video store called 2 FOR 1 VIDEO where you’d get 2 movies and you’d get another one just for free, which was a great thing to get 3 movies on the weekend. Then Blockbuster moved in when I was in junior high, but I had a bunch of girlfriends and we would go and rent horror movies. Video stores were such a good thing and there was something nice about searching through the aisles of VHS and looking at the back of boxes to decide if you wanted it.