One of DAILY GRINDHOUSE‘s favorite discoveries at this year’s FANTASTIC FEST was A.D. Calvo’s low-key horror film SWEET, SWEET LONELY GIRL. In addition to talking to the director and stars with Mike Vanderbilt, DG’s Jason Coffman sat down with the film’s cinematographer Ryan Earl Parker during the fest to talk about the film.

Jason Coffman (JC): When was the movie actually shot? It has such a perfect Autumnal feel.

Ryan Earl Parker (REP): We shot in December of last year. We started just before Thanksgiving and wrapped on the 20th of December.

JC: What did you shoot on?

REP: We shot on a RED Dragon with a 20mm-120mm vintage Angénieux zoom. The film is set in ‘79/’80, and we were trying to go with sort of a throwback, vintage look. One thing I admire about vintage lenses is they sort of take the edge off the new digital sensors. We liked that zoom because it’s actually a pretty poor lens mechanically, it has chromatic aberrations issues. But it’s those imperfections that really give it the character that it needed, and also we wanted a good zoom lens because we wanted to do in-camera zooms. There were times I was going from one end of the lens to the other, I was taking my hand and cranking it all the way! There’s a scene where Adele walks across the street and down the sidewalk, and we started at the wide end of the lens and went all the way in. We did a lot like that, in-camera zooms. I think it was the right choice for the movie.

JC: Yeah, it just looks beautiful. Was it shot in 4K?

REP: I believe we shot 4K. There were a couple scenes that we may have shot 5K just to have the room in post, but I think pretty much it was all 4K. 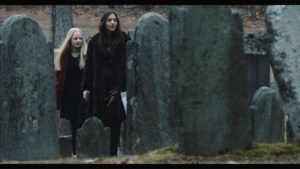 JC: Going into it, did A.D. (Calvo, director) have everything storyboarded out? How precise was it before you got started on shooting?

REP: He didn’t have storyboards, but he had very complex notes for each scene. What he wanted to achieve narratively, what he wanted to achieve visually. I liked working that way because there was a lot of discovery on-set. We picked a lot of angles that seemed to be more voyeuristic, we picked a lot of angles that were looking through mirrors and through windows, anything to sort of obscure the frame. We tried to find shots like that, sort of like peeking into this world a little bit. But yeah, Alex is very collaborative. We referenced a lot of movies: BURNT OFFERINGS, HEAVENLY CREATURES, MY SUMMER OF LOVE, PERSONA. There were parts of the different films we chose to reflect certain parts of the film. I thought it was interesting that we took all of these references that were pretty diverse and we were able to kind of take them and let them simmer and go forward with our film.

One of my favorite experiences was when we were lighting the first scene we shot. The first scene we shot was when she comes into the pawn shop, and the producer actually was the pawn shop owner. So I was a little nervous! We talked about doing a lot of forced silhouette, a lot of keeping Adele in the dark, even when we shoot her straight on I did a lot of lighting half of her face and the other half would go dark. We were lighting this scene and it was pretty dark, you couldn’t see anything in the foreground. We let the background play and I sort of said “OK, we’re ready, is this the world we’re creating now?” And we went forward, and I was like OK, let’s go! This is the way we’re going! It was fun.

JC: When we were talking to A.D. the other day, I was sort of hesitant to mention that the tone of the movie reminded me of early 70s regional horror stuff like DON’T LOOK IN THE BASEMENT. He was excited I mentioned it, which I was happy about because I was a little worried about offending him! Because a lot of people think of that as sort of lower-rent stuff.

REP: No, I think even Mike Ryan, the producer, mentioned that it sort of has this “afterschool special” feel to it. I’m not as versed in that cinema as Alex is, he’s a huge fan of horror and genre and I tend to do a little bit of everything. But no, I think those references make sense, and I think it’s definitely a compliment to make those comparisons.

JC: That’s good! It’s certainly the kind of thing that could go either way. Were there any other non-genre things that you guys were talking about as references for this film, or do you have any favorite go-tos?

REP: We did screen THREE WOMEN, and I’m an Altman fan. Also, I like cinema of the 70s in general. All of my favorite DPs are from the 70s era, when they were really kind of pushing the envelope. What I was really trying to achieve was for the film to have a unique texture. And I think it does, when you watch the film especially side-by-side with the other films here, it does feel like it’s a unique look. I also like the fact that it feels like at any moment, if you blow too hard the entire film would just kind of wisp away. I felt like that’s a pretty good metaphor for Adele, who is a very fragile character. A lot of that was the lens and camera, but also in the lighting that we chose. 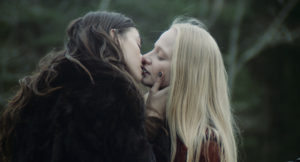 JC: Have you shot other genre films?

REP: The last horror film I shot was called GIRL IN WOODS. It stars Charisma Carpenter, it was released last year. It was more of a psychological horror film. (SWEET, SWEET LONELY GIRL) was a little more unique because it didn’t have gore and there were no “jump out of your seat” moments. It really feels to me like sort of an art film with a horror backdrop. It’s a little bit different in its approach, and a little bit different in the audience it’s going to attract, I think. For me, it was a great blend to have this sort of horror backdrop with an art film feel. A very character-driven film, which is what I really love to do.

JC: Yeah, that’s what A.D. was saying the other day, too. That he likes to focus more on character and that’s what he’s really interested in.

REP: Alex is an amazing collaborator. When I read the script, I was just like “I will do anything to work on this movie!” It’s rare to get material that’s this good, and that insightful. I love the subtext of the Reagan era. (Alex) talks about the big business, big pharma, sort of a loss of innocence in that respect. There’s a line where they’re sitting in the bar watching Reagan on television talking about doing the wrong thing for the right reasons. I think that’s an interesting subtext that I hope people will keep in mind when they’re watching.

JC: You mentioned that there are no jump scares in the movie, but there *is* one!

REP: With the mirror?

REP: Yeah, it scared the shit out of me! (laughs)

JC: Totally! I knew it was gonna happen–

REP: I knew it was gonna happen, too! (laughs)

JC: And I still jumped out of my seat! That was pretty great. 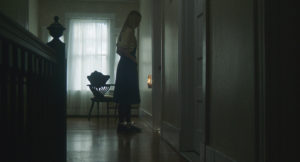 REP: This screening last night was the first time I had viewed it in a theater, or with the final sound mix. I found myself settling in and feeling like “OK, what’s gonna happen?” And when you can create that kind of environment, when those moments come up it’s pretty effective.

JC: The movie is very hypnotic with that measured pace, so when it amps up it’s really creepy.

REP: I feel like we were able to create a pretty unique world. It’s hard to do anything in a specific period. I think Robert Wise, the production designer, just his entire team was on point. And Jami Villers, the costume designer, she was awesome. Everybody on the team was great in helping to create this world (Adele) lives in. We shot in this small town in Connecticut called Vernon, and we had to take four different houses and Frankenstein them together. I think it was important to pick the right set for each environment in the house, and luckily we were able to do that. All the homeowners were great, very accommodating…

JC: Well, it probably helps that you weren’t throwing buckets of gore all over the place.

REP: That’s true! We had a pretty minimal lighting package, too. It’s difficult shooting with the RED, we needed a lot of light power so we really maxed out our lighting package. I even had a few lighting instruments flown in from Memphis that I owned. I’m proud of what we were able to do, we tried to use the environment and as much natural light as possible and augment from there. There were only a few scenes that we lit from scratch. All the stuff in the bar is pretty much from scratch, but a lot of the stuff in the house we used the environment to fill in the lighting.

JC: Were all of the locations like the bar and the beach in the same area?

REP: The beach was on a lake about half an hour outside of town. The beach and the lake house were in the same area. The bar was not far from where we were shooting, it was one of those “member only” lodges and the whole place was like stuck in time. It was great! I loved it, I felt at home. We didn’t have to do much to the actual building, just sort of like changing set pieces around. I grew up in rural Tennessee, and I walked in this place and was just like “These are my people.” It was great shooting in Connecticut, but I’m from Memphis. So the first three days I froze my ass off! I’d never bought insulated shoes before, but I did when I was up there!

JC: Do you have anything else in the works at the moment you’d like to talk about?