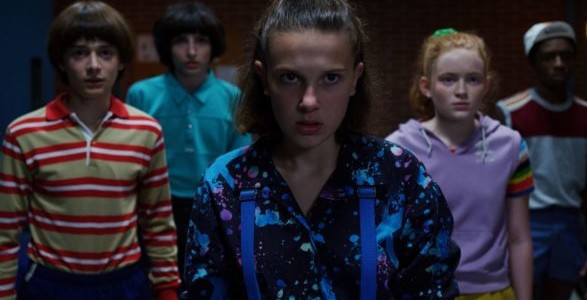 It’s generally understood by most pop culture addicts, critics, and nerds that, once a generation reaches a certain age, the artists of that generation make entertainment rooted in the time of their adolescence. RADIO DAYS, Happy Days, CROOKLYN, The Wonder Years, DAZED & CONFUSED, STAND BY ME and more are just some examples of previous efforts in film and television where creators set their works in the formative decades that evoke nostalgia and attempt to recapture that feeling for the particular artist of that defining time. The obvious thinking is that filmmakers, Hollywood executives, and showrunners are usually in their mid-30s to mid-40s so they tend to bring back what was cool to them — which happens to coincide with this very intense emotional period in their life that would inform their tastes and obsessions and linger for years. So with each new crop of artists comes an iteration based on what has come before, told through a lens of nostalgia but also a personal connection. 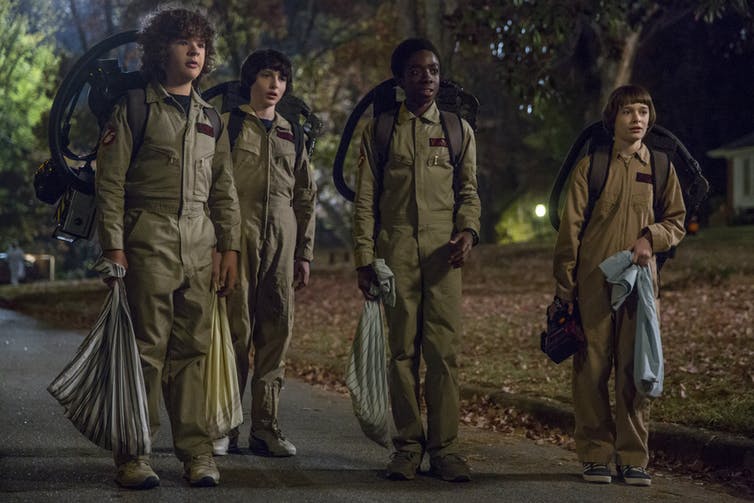 One show that leans in to that hard is Stranger Things on Netflix (bom-bom), a science-fiction horror adventure from The Duffer Brothers about a group of kids in a small town beset by horrible forces of the government and beyond that is coming back for its third season on July 4. A criticism often lobbed at the show is that it is “nostalgia porn,” meaning that it panders to people lapping up the nods to the ’80s. In fact, multiple people say they have no interest in the ’80s, and that’s why they couldn’t get into Stranger Things or similar works. The objection makes sense as the show does amplify the styles and fads of that decade. The Duffer Brothers use pop songs, awkward fashions, the limited technology of the time, movies of that era, and a synth-heavy score to highlight you are watching a show that is set in the 1980s in America.

(Quick tangent: People who say the synth is the sound of the ’80s — what are you even talking about? Yes, synthesizers were used then, but really only briefly and at the tail end of the ’70s as well. New Wave and the films of Michael Mann, John Carpenter, and Roger Corman’s sci-fi flicks used them, sure. But do you know what actually is the dominant musical instrument of the ’80s? The Saxophone — that shit was in every pop song, R&B song, rap song, dramatic movie, comedy, crime show, and any place that Clarence “Big Man” Clemons showed up. Hell, we elected a dude in the next decade that made himself seem cool by playing the damn sax on Arsenio Hall. But I digress…) 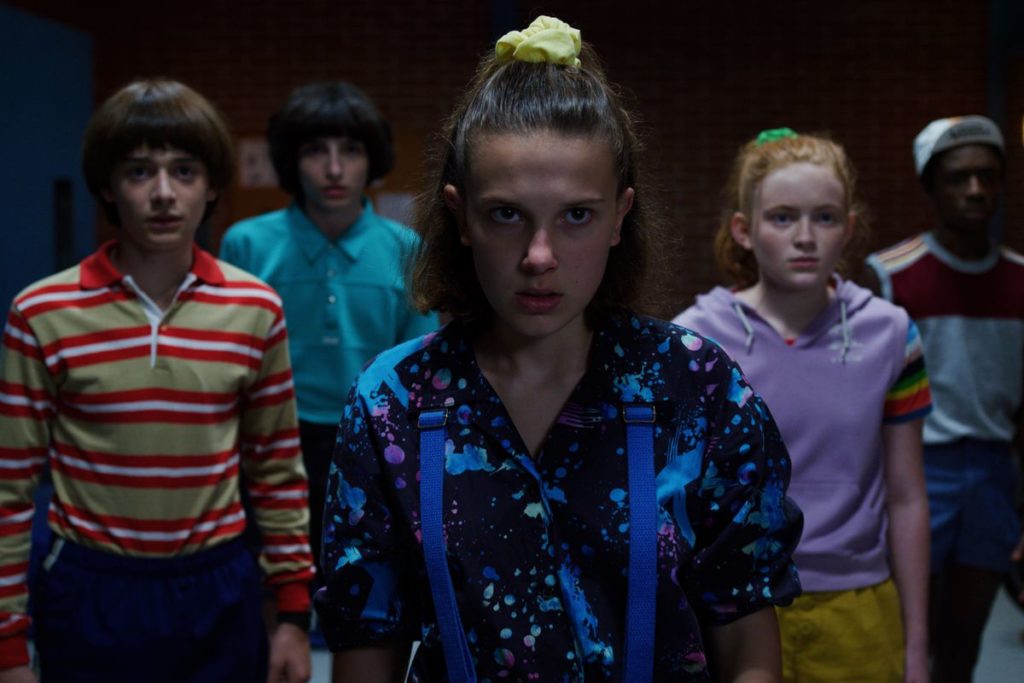 However, I think people who criticize Stranger Things as solely a delivery system for “I Love the ’80s” references are missing out on the true nostalgic elements that attract viewers of all ages. Perhaps because I’m of the same generation as the Duffer Brothers, and a lot of this nostalgia is meant to appeal to me, I could be accused of being in denial. But I don’t think so because I can recognize similar attempts of setting films in that decade with similar reference pools and often times it doesn’t work for me. SUPER 8 looks nice and plays like a poorly assembled Amblin greatest hits, but it’s awfully written and goes off the emotional rails in the third act. SUMMER OF ’84 has interesting moments, mostly the juxtaposition of “real crime” with that Reagan suburbia sales pitch, but it lacks any true depth of character to be as effective as it could be. BUMBLEBEE is…fine, at best. I found EVERYBODY WANTS SOME to be a real chore as it tries to cram in every social scene around in the mid-80s into one night for some college jocks. And of course, READY PLAYER ONE, arguably the king of that particular repugnant mountain. I enjoyed Cline’s book (I legit think that if you asked him to describe the demographic he was aiming for, it would just be a sketch of me…looking sad), and found that it actually has a pretty strong subtextual argument that nostalgia overload stifles innovation and progress. But that movie (yes, yes, outside of THE SHINING scene and maybe Chucky’s appearances) is a hollow exercise in namechecking franchises and pop culture icons directed by someone who was already too old to really care about them at the time (when he wasn’t, you know, helping to create them himself).

But IT (2017)? SING STREET? Those similarly ’80s set films work in a lot of the same ways that Stranger Things does. Yes, it traffics in pop culture references and the marketing departments for all of them thought that was the big hook. (New Coke? Really, Netflix? C’mon, son!) These works don’t shy away from hanging lampshades on their use of The Cure or the fact that RISKY BUSINESS exists, but I don’t believe those are the nostalgic elements that are attracting so many people to these works. It’s not nostalgia for the things of that time, but of the types of stories of that time. That is why there’s a resurgence of these films and TV shows, of the works of Stephen King, and a return to those flawed but noble heroes we read in comic books. Amblin Entertainment, Beverly Cleary, Chris Claremont, Judy Blume, Marv Wolfman, Elizabeth Winthrop, and a bunch of other artists at the time consistently focused on characters (many of whom were adolescents/teens) who were outcasts — or at least not classic hero types. They weren’t good looking or cool; they lacked confidence and made mistakes in their efforts to pursue love, or popularity or whatever lay just out of reach. But the message of these tales — It, The New Teen Titans, ‘Salem’s Lot, THE MONSTER SQUAD, The Uncanny X-Men, E.T., THE GOONIES—was always that together these Loser Clubs could take on forces far more powerful and more insidious than they ever feared. Mobsters, government agents, Brotherhood of Evil Mutants, something called Trigon, vampires, an elder clown god of malice, and puberty stood against these awkward groups of flawed people and, by banding together, each of these nightmares fell before that fellowship. 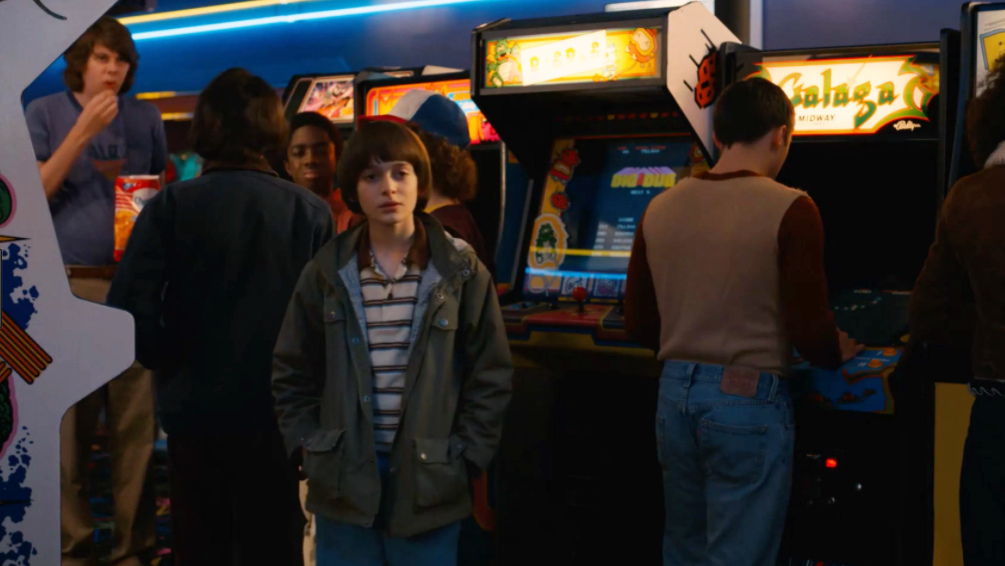 I think that is the nostalgia that people truly respond to in Stranger Things, and IT (2017), and SING STREET. It’s a representation of vindictive evil that will kill and hurt the people we care about and are seemingly far beyond our protagonists’ pay grade, and no one, even if they are far more qualified to handle the threat, will listen to or stand with these groups of outcasts. It’s an underdog story of the important bonds we make that lift us up against a fearsome opponent that has proven how horrible it can be. Those were the stories most prevalent in the ’80s — John Hughes movies, Richard Donner flicks, Shane Black and Fred Dekker all trafficked in people being horribly outmatched in a system designed to abandon them, but finding a way through together. So taking the trappings of the decade — piles of Rubik’s Cubes, STAR WARS videotapes, Members Only jackets, arcade games, New Kids on the Block cassettes, and Zubaz strewn about — as the superficial vehicle to deliver this return to form makes sense. It’s an easy connection for the artists because that was the era they associate with those stories (also no cell phones makes things SO much more interesting in terms of plotting and separating factions). But it doesn’t always have to be rooted in the decade of REVENGE OF THE NERDS and POLICE ACADEMY. It’s also what makes Joe Cornish’s throwbacks — ATTACK THE BLOCK and THE KID WHO WOULD BE KING — work so powerfully. These are modern-day movies set in current times with diverse casts that improve upon tokenism or patriarchal trappings of their ’80s forebears. But they too are about a group of misfits suddenly pitted against a group of very dangerous villains, and we are shown just how serious the threat is to those that come up against them.

To be fair, these types of stories didn’t vanish when January 1, 1990, came around or anything. Marvel was picking at the bones of Claremont’s X-Men foundations for decades. But there were shifts in the types of stories about kids or the types of teens shown on screen. The majority of Young Adult fiction and adaptations became about beautiful people, lusting after each other, who are singularly special in some regard and more or less destined to upset the system by defying what’s come before. Harry Potter is literally the most famous person in all of wizarding. He is inherently amazing at Quidditch, adored by everyone except his mom’s emo stalker and the class rich dick, and we’re all supposed to be cool that he eventually bangs his best friend’s young sister. That’s not to say that TWILIGHT, THE HUNGER GAMES, HIS DARK MATERIALS, or HARRY POTTER are necessarily bad (or even don’t share some of this same narrative DNA), but it’s to point out the shift in culture and the stories that are told. Yes, they’re still presented as underdog tales against an impressive force but less focused on flawed people trying their best in the face of something that they may never honestly beat in the end.

Stranger Things traffics in nostalgia. Their first big hook of the new season (out July 4 on Netflix (bom bom)) was about the wonders of a goddamn mall. That’s not what I’m disputing. What I am suggesting is that fans of these throwback works aren’t just responding to retro aesthetics or mixtapes but also to a type of story they either grew up with, or remember seeing, or desperately need for the first time in their lives. Spoiler alert — the world is on fire, fascism is on the march in far more countries than most people can locate on a map, corporate greed and monopolies are going unchecked, we’ve been at war (at least one) for 17 years, and positions of power are constantly telling specific groups that they don’t count, they’re not real, they don’t matter, and they aren’t wanted. In the face of all of this, where else can we turn but to each other?

Every institution—religion, media, news, entertainment, business, politics, etc.—has failed in some capacity for the past 50+ years (frankly a lot longer depending on race, gender, sexual orientation, class, geographic location, any way to marginalize folks). It’s only by grasping our hands and walking towards these beasts, trusting that the person next to you will still be holding your hand and will remain there for you no matter how bad it gets, that we can enact change. It’s only by recognizing that we are the weirdoes, mister, and there’s more of us than there are of them can we stand up to this entrenched power that seeks to do us harm. We need heroes, yeah, but what we really need is to recognize that we are those heroes, and it’s time to go to work. 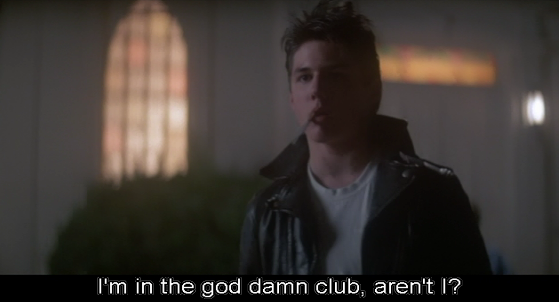