Home  ⁄  The Wire  ⁄  Beware The Children: 25 Years Of Carpenter’s ‘VILLAGE OF THE DAMNED’ 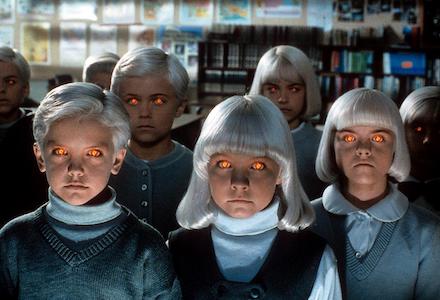 (Spoilers for VILLAGE OF THE DAMNED, a 25 year-old film, below)

When I was a wee one, I remember listening to my parents discuss the winners and losers at that year’s Academy Awards, which had aired the night before. (BRAVEHEART took home best picture) In all of my naivety, I asked if VILLAGE OF THE DAMNED had won any awards, as I had just seen it on video and given it my eleven-year-old approval. My father gave me a funny look and asked, “For what? Worst movie of the year?” Also during this time, I had personally known someone who had gone to see VILLAGE OF THE DAMNED in theaters and had become so terrified that she began having a panic attack and the theater had to call an ambulance. This was a defining moment for me as a film fan.

I not only realized there was a chasm between all the different ways someone could respond to genre films, some losing themselves in the story and visuals with others dismissing them outright, but that there was also such a thing as celebrating an imperfect film. Critically dismissed upon its release—much like another Carpenter remake, THE THING—VILLAGE OF THE DAMNED enjoyed a fine opening weekend at the box office, but didn’t have the legs to make it a theatrical success. Unlike THE THING, however, VILLAGE OF THE DAMNED hasn’t enjoyed the same kind of reappraisal. Critics and audiences didn’t like it then, and they don’t like it now. Reasoning for the distaste runs rampant: miscasting, a severe lack of character development, and a thinly plotted, inconsistent script.

I don’t disagree with any of that, but, more on that in a minute. 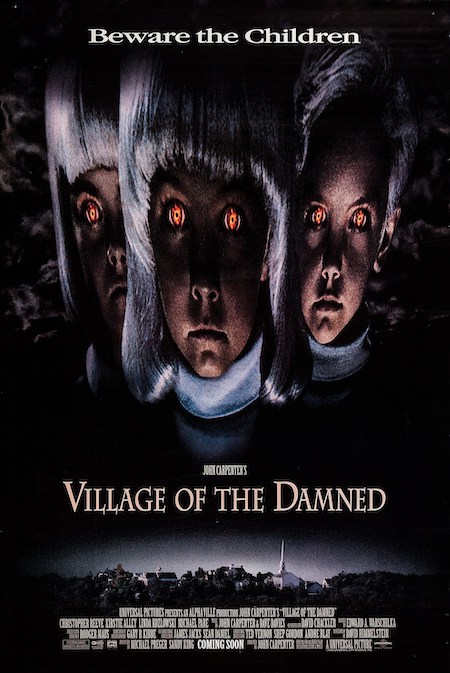 After the town of Midwich falls victim to a mysterious scourge, everything with a pulse passes out. They awake hours later, unsure of what’s happened, and try to get on with their lives…until it’s revealed that many of the women in town are now mysteriously pregnant, including the virginal and the biologically barren. A shadowy government agency descends on the town to study these children born with blonde hair and a very special skill set: the power to read and control the minds of others, making them do things they would never normally do—to themselves or others.

VILLAGE OF THE DAMNED doesn’t showcase John Carpenter at his best as a storyteller, though he does bring his usual visual flourish to a project that depends almost entirely on it to succeed. As usual, he’s filled his cast with unexpected choices and enables his actors to play roles they have never had the chance to play before. Christopher Reeve is perfectly adequate as Dr. Alan Chaffee, and from time to time even feels more at home playing the father of an evil alien leader than he ever did as Superman, because here he actually has to act. (Though Reeve is fine, it’s too easy to picture frequent Carpenter collaborators Sam Neill or Kurt Russell in the role.)

Linda Kozlowski, mostly known for the CROCODILE DUNDEE franchise, also provides a perfectly serviceable performance as Jill McGowan, one of the many nu-mothers, but spends most of the film looking dour and downtrodden. The only one apparently having any fun is Kirstie Alley as Dr. Susan Vurner, the cigarette-smoking, power-suited government agent who seems to know from the very beginning what is happening in the town of Midwich… but doesn’t feel the need to clue anyone in until it’s too late. And let’s not forget Mark Hamill, cheesing it up as Reverend George, returning to work with Carpenter following their collaboration on Showtime’s television movie anthology BODY BAGS. 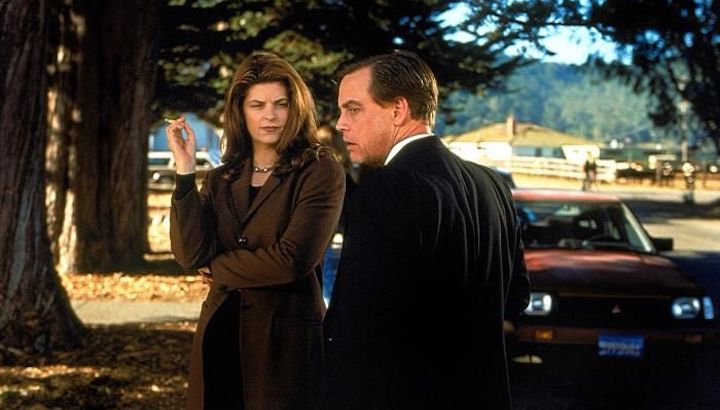 As previously stated, VILLAGE OF THE DAMNED’s biggest problem is the script by David Himmelstein (including an uncredited rewrite by occasional Carpenter writing partner Larry Sulkis [GHOSTS OF MARS] and Steven Siebert). Despite the script’s collection of distinct characters, there is hardly any interaction between them, with Reeve’s Chaffee being the only connecting tissue. Without him, characters exist in their own bubbles, making the film feel aloof and unfinished, and denying opportunities to explore how normal, small-town people are dealing with extraordinary circumstances. 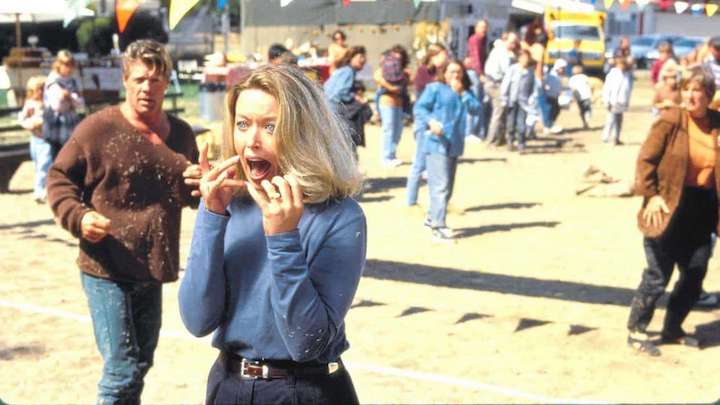 Though they both have major roles, Kozlowski and Alley don’t exchange a single word to each other, and being that Vurner wants to dissect the kids because she knows what they can do, and also being that Jill’s son, David, seems decent and good, the chance for interesting conflict between them remains unexplored. VILLAGE OF THE DAMNED feels like this almost all the time, offering the impression that entire sections of the script are missing to aid in a brisker pace. Understandably, the nature of the film demands leaps in time so the children can age, but it often feels as if important developments were sacrificed in the process.

Muddied screenplay aside, Carpenter’s direction shines through and makes good use of the film’s sillier aspects. For someone who had once questioned his own ability as an “actor’s director,” his ease at guiding children—nine, in fact—deserves recognition. Lindsey Haun (True Blood) as Mara, the children’s ringleader, offers a solid and atypical villain role, tasked with memorizing large chunks of complicated and technical dialogue while removing any semblance of emotion from her voice.

Playing the antithetical thorn in her side is Thomas Dekker as David, the only member of the blonde brood seemingly born with humanity. His role is surprisingly complex in a philosophical sense; he constantly questions himself, confused by the “emotions” he feels. In a nice scene between he and Chaffee in a cemetery, David asks why he mourns for someone he’s never met—the stillborn baby that was meant to be his “partner”—and Chaffee, who was there to visit his deceased wife, is taken aback by David’s humanity, all of which allows them to share a moment of mutual sorrow.

It’s one of the few scenes with genuine pathos. Dekker would go on to have a successful career for a young actor, with his highest-profile role being John Connor in Terminator: The Sarah Connor Chronicles, though to me he’ll always be the hospital-bound Bobby who demanded that Yankee Paul O’Neill hit two home runs in Seinfeld. (One of the other children is played by Shawna Waldron, best known for her role as “Icebox” in LITTLE GIANTS. She has one line of dialogue. It’s not bad. The end.)

Though the film’s final edit lacks cohesion, smaller moments help to shoulder the burden it leaves behind. An excellent montage takes place at the funeral of a young woman who opted to remove herself from earth following her miscarriage of the aforementioned special child. Reverend George gives an impassioned eulogy for the departed while also openly acknowledging the evil that has plagued their small town. It’s the only time in the film a parent attempts to reach out to other parents and ask them, basically, “WHY AREN’T WE TALKING ABOUT HOW FUCKED UP THIS IS?” Though Hamill’s monologue borders on cheesy, Carpenter’s eye and music makes it work.

As for the finale, it’s incredible, once again aided by Carpenter’s superior musical skills (sharing duty with Dave Davies). From the first shotgun shell to the final explosion, the music, the quick (and quickening) cuts, and the jumping back and forth between the carnage outside combine to create a sequence that’s suspenseful, exciting, and very satisfying. It works on a very simplistic level, appealing to what Carpenter calls “the lizard brain”—our need for destruction and domination. The finale is literally a race against time, syncopated by the ticking clock counting down to the detonation of the explosives hidden inside Chaffee’s briefcase and the chipping away of the brick wall he envisions in his head to block the children’s uncanny sight.

In one of my favorite moments of any Carpenter film, the music builds and builds and finally ceases, a small choir on the soundtrack lets out a single sigh, all goes quiet, the kids look at the clock realizing this has been his plan all along…and the roof is blown off the place. It’s one of the few times VILLAGE OF THE DAMNED truly comes to life.

Moments like these, alongside all the blander and unfocused moments, exemplify Carpenter’s open and overall indifference to the project as well as the reasons why he opted to take it on. It’s believed that Wes Craven had once been attached as director but had passed it on to Carpenter as a favor, enabling him to satisfy his three-picture contract with Universal.

This coupled with Carpenter’s own comments on the original movie being “hilarious” suggests his heart simply wasn’t in it. The finale, in fact, was evidently the reason Carpenter agreed to take on the assignment, saying, “The reason I wanted to remake THE THING was because of the blood test [scene]. The reason I wanted to remake this one was because of the brick wall scene.” It’s no surprise, then, that the finale is the best thing about it.

VILLAGE OF THE DAMNED is no classic, and I’d even hesitate to call it a good film, but there are enough good things about it, more than including Carpenter touchstones that would come to define his career, to justify its existence.