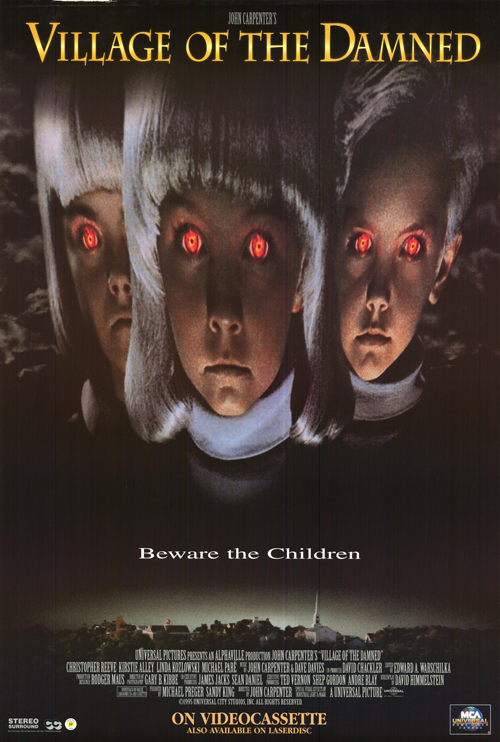 Looking at John Carpenter’s filmography, you can’t help but feel a little bit awed by the run he had from 1976 to 1994. Your mileage may vary on a few of them, but if you see a list that includes ASSAULT ON PRECINCT 13, HALLOWEEN, THE FOG, ESCAPE FROM NEW YORK, THE THING, CHRISTINE, STARMAN, BIG TROUBLE IN LITTLE CHINA, PRINCE OF DARKNESS, THEY LIVE, MEMOIRS OF AN INVISIBLE MAN, and IN THE MOUTH OF MADNESS, and you don’t think they’re either stone-cold classics or at least thematically or aesthetically interesting, than buddy, you just don’t get genre cinema. So with that in mind, I was pretty excited to finally getting around to checking out one of my few Carpenter blind spots, via the just-released Blu-Ray of VILLAGE OF THE DAMNED, out from Scream Factory as of now. Problem is, once I finished watching it, I realized that one of the downsides of having a track record like Carpenter’s is that it makes a dud like this one hurt all the worse.

I’ll admit part of the problem was a bit of rose-colored delusion on my part. The film has its fans, but nobody’s exactly been singing its praises for the last twenty years. Historically, Carpenter’s films have always been prime for rediscovery, and that fac,t combined with a minor amount of ego thinking I’d be the one doing the rediscovering, made me put down the twenty-plus dollars for this thing.

Based on the 1960 film of the same name — which in of itself was based on the John Wyndham novel The Midwich Cuckoos — VILLAGE OF THE DAMNED opens on the small coastal town of Midwich, where the residents are taking part in a carnival that gets cut short when everyone in town simultaneously passes out. They wake up to find out that several of the town’s women have become pregnant, and in turn, all of them give birth on the exact same night. Drawing the attention of the government, in the form of a cigarette-smoking spook (Kirstie Alley), the parents of the town (Christopher Reeve, Mark Hamill, and Linda Kozlowski) quickly realize that their children are a lot stranger than your normal ankle-biters, and a whole lot more malevolent.

So to break down the main problem with this flick, it’s this: John Carpenter is too good of a director to make a truly bad movie. What this means is that while watching this movie, you keep seeing glimpses of promise, whether it’s in the opening scene, where the whole town passes out, which is genuinely creepy, or the weird effects used for the kids’ eyes, or the massive firefight near the end. Yet it all never really coalesces into a compelling whole, which is a problem that I think kind of boils down to the film’s pace. Carpenter’s films generally take place over the course of a single day, to a week top,s which helps maintain a full-throttle feeling that had served him well up to this point, but VILLAGE OF THE DAMNED takes place over the course of years. A necessary element, given that you have to wait for the kids to grow up, but one that also makes the story go through starts and stops.

And, while we’re on the topic of said kids, they’re… fine. I guess? I’m generally of the opinion that child actors’ performances only ever reach “good enough,” which is basically what you get here. But it’s not even their fault, because the creepy-kid genre just does not work with John Carpenter’s aesthetic. I’ve always described Carpenters aesthetic as blue-collar terror, and although it somewhat fits here with the characters of the parents, the villainous kids kind of get left in the lurch, as if Carpenter was sleeping through a bad hangover when he should have been picking them up from little league practice.

Look, I know it seems like I’m coming down hard on this film, but it’s really just because I can see why someone would want to remake VILLAGE OF THE DAMNED. I’ve never seen the original (but here’s a solid write-up by Scott Drebit of DAILY DEAD), although I think the premise is an intriguing one, about the the fear parents inherently feel towards their children, and the sense of fear and powerlessness that their births might trap them in lives they didn’t plan to have. As influenced as Carpenter was by the original, he doesn’t push those ideas far enough (I actually wondered what David Cronenberg would have done with the material if he hadn’t been knee-deep in his art-film phase at the time, but then I remembered THE BROOD exists.) Although Carpenter might have upped the violence from the original, the film still isn’t enough to make an audience scared of a gaggle of kids with bad haircuts and a hideously outdated fashion sense.

Still, Scream Factory packages this film in such a way that even a relative disappointment like this one feels necessary to own. The film’s presentation is a solid upgrade, the visuals pop, and there are plenty of the usual vintage features, along with Scream Factory’s recurring ‘Horrors Hallowed Grounds’ feature, set on the locations of horror movies (turns out this film was made in the same town where Carpenter shot THE FOG). There’s no commentary, which is both weird for a Carpenter disc, and kind of a shame, since despite my complaints, I would have very much liked to have known more about certain elements of the project. Thankfully, we get those explanations in a roundabout way, thanks to a solid making-of documentary that explains the project’s origins (Carpenter originally wanted to re-make CREATURE FROM THE BLACK LAGOON, a film that’s been more than one director’s white whale, but he ended up making a deal with Universal to make this first, which, surprise surprise, bit him in the end), and its general production (turns out the kids weren’t wearing wigs, as many people believed, but were actually using a specialized dye that caused them horrendous scalp pain). The thing’s informative, if a little fluffy for my taste, but then, every making-of can’t be like the one on MANIAC COP 3, so what are you going to do? 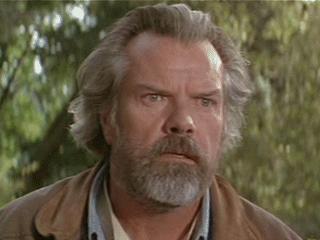 The real treat though, and possibly worth the price of the disc alone, is a lengthy segment with legendary character actor Peter Jason (THEY LIVE, Deadwood), who hooked up with Carpenter during the back half of the director’s career and created an interesting partnership. There are plenty of worse ways to spend forty minutes, as Jason is genial and a natural raconteur and his insights on everything from this, to PRINCE OF DARKNESS and even GHOSTS OF MARS had me busting up at times, and giving me new appreciation for certain things I had originally wrote off.

So in the end, unless you’re a Carpenter completist such as myself, this disc won’t offer much, although damn if Scream Factory doesn’t make it look like necessary viewing. If you’re a fan then this will belong on your shelf, as it serves as a pretty good document of a turning point in Carpenter’s career and it may make you appreciate what came before that much more.

But what do I know. I’m the guy that thinks VAMPIRES is underrated.

See for yourself with the new Blu-Ray edition!

Some pictures of Meredith Salenger, only because you-know-who edits the site: