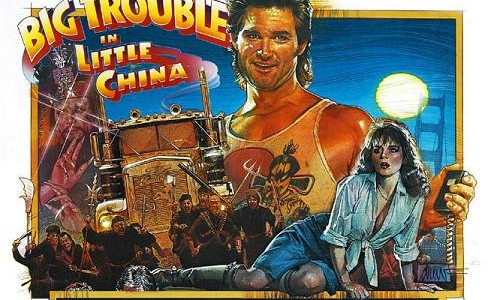 I won’t leave you hanging.  It’s because I love the movie a lot.  I get the sense that I’m not alone in the realm of the internet.  I could qualify that love; I could add a postscript that I like to write to movie scores and instrumental music, or go on and on about the importance of John Carpenter’s work on the landscape of popular culture, but look, none of that is going to get me laid in time for next Valentine’s Day.  It’s what it is, and so shall it ever be.

John Carpenter’s most widely-acknowledged classics are HALLOWEEN (my DG review here) and THE THING, and possibly ESCAPE FROM NEW YORK.  Beyond that, the idea of where the rest of Carpenter’s movies fit within the realm of canon seems to be debated.  Not by me, mind you – I firmly believe that the man’s filmmaking mojo was untouchable from at least the release of 1976’s ASSAULT ON PRECINCT 13 (my DG review here) to that of 1988’s THEY LIVE.  That’s one hell of a run.

It hardly seems arguable to me that, as long as there is an auteur theory, John Carpenter should get his rightful due from the highbrow film establishment as one of the luminaries of the last thirty years.  The reasons why he doesn’t get revered in the hallowed way that contemporaries like Coppola, Spielberg and Scorsese now do is because, like Michael Mann, Carpenter’s best-known work came a little later than theirs, and, unlike all of them, all of Carpenter’s work is in the less reputable genres of horror, action, and science fiction.

Of course, the auteur theory is generally a flawed one:  Carpenter’s films wouldn’t be what they are without the contributions of many writers, co-writers, actors, cinematographers, even other composers.  All the same, here’s the test:  Pick up on any sequence – even a single shot – from a John Carpenter film at random, and odds are it wouldn’t take long to identify it as a John Carpenter film.  His films are united by a look, a sound, a vibe, that other movies could never have.

Of course, this perspective didn’t spring on me immediately.  I was to formulate that grandiose opinion much later on in my movie-watching development.  To follow a director that closely, you have to start with one movie, and for me, at first, there was BIG TROUBLE IN LITTLE CHINA.  It started out as a “big brother” movie – you know, the ones you’re not supposed to watch as a kid, but finally get to anyway, when the right influence relents.  My friend Jay Roberts and I slipped into the basement den where his older brother and his buddies were watching it, and we hid behind his chair, until he noticed us there, and actually let us watch the rest.  I was ten.  That was huge.  From there, I managed to record the movie onto VHS off Channel 5 on a Saturday afternoon.  That version had the swears out and commercials in, but I still managed to run that thing ragged.  It’s a pantheon movie for me.

Carpenter has called the movie “an action-adventure-comedy Kung Fu ghost story monster movie,” which is not only accurate, but everything a ten-year-old boy with a big imagination wants from a movie.  Also, its main character is a trucker, which is what I wanted to grow up to be.  (Weird, true fact.)  It’s the definition of a cult film – no one will ever classify or study BIG TROUBLE IN LITTLE CHINA as an important movie (yours truly excepted), but when pressed, many would admit that this is the kind of joint they’d much rather be watching on a Friday night.

Okay, so real quick for the few who enjoy having your movies recapped:

Jack Burton (played by Kurt Russell, the DeNiro to Carpenter’s Scorsese, this time out doing a hit-and-miss John Wayne impersonation) is a trucker who is owed some gambling money by his old friend, San Francisco Chinatown restaurateur Wang Chi (played by Dennis Dun, very likable).  Before paying up, Wang asks Jack if he will accompany him to the airport, where he is picking up his fiancée.  At the airport, the girl is kidnapped by street thugs, since she is the rare Chinese girl who has green eyes.  To rescue the girl, Jack and Wang have to venture into the Chinatownunderworld, and to face its overlord, David Lo Pan, played by the busy character actor James Hong in a seriously immortal performance.  I’m not kidding, it’s unforgettable.  If for no other reason, watch the movie for this guy.

In a shocking dual role, Lo Pan is a wizened old husk of a man, but also a hundreds-year-old ghost warlord demon who is cursed and who can only become flesh-and-blood again by marrying the girl with green eyes.  In addition to a small army of fake cops, cheesy gang members, and kung fu warriors, Lo Pan has three supernatural enforcers, The Three Storms (Thunder, Rain, and Lightning), who will look familiar to anyone lucky enough to have seen SHOGUN ASSASSIN.  And he has a couple monsters too – The Guardian, which is a floating blob covered with eyeballs, and The Wild Man, which is basically a werewolf, only Asian (and therefore probably my favorite character in the entire movie). 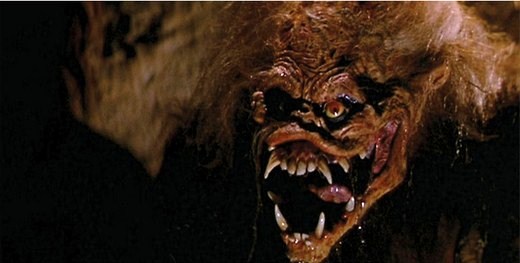 Wang brings in some allies too, best of all being the excellently named local wizard Egg Shen — played by Victor Wong, in the film’s other legendary performance.  A post-PORKY’S, pre-Sex In The City Kim Cattrall is in the movie too, but mostly just to run rapid neo-Hawks dialogue with Kurt Russell in a gratifyingly anti-romantic subplot.  No kid wants to see Jack Burton ride off at the end with some lady riding shotgun in the Porkchop Express.

It’s a kitchen sink kind of a movie, obviously – or more accurately, a Chinese buffet of a movie.  Which is some of the most fun you can have.  Twenty-some years later, I can surely see where the corniness lives, most obviously in the unfortunate sculpting of most of the haircuts present.  But overall, it still works for me, almost as much as it did when I was ten.  I’m still struck by the energy of the thing.  If I wanted to be halfway pretentious about it, I might make the assertion that BIG TROUBLE IN LITTLE CHINA was the first action movie of the video-game era (either that or its studiomate from 1986, the much better-received ALIENS).  It’s even structured like a video game, with the way the characters descend through several levels to meet their objective, squaring off with increasingly more dangerous enemies as they go.  And there’s even a “reset” or a “do-over” – when they don’t rescue the girl on the initial try, they go back with more allies and bigger guns.

This is also an example of what could be called the cinema of escalation:  A fantastical story that leads an audience towards buying into its most fantastical elements by starting out in the “real world”, and methodically ramping up the crazy situations and characters while never losing track, always healthily maintaining the suspension of disbelief.  In that way, the closest cousin to BIG TROUBLE IN LITTLE CHINA that I can think of at the moment is probably GHOSTBUSTERS, which is never a bad comparison to be drawn.  Hey, after all, BIG TROUBLE IN LITTLE CHINA has ghosts too.  (And also it shares a visual effects supervisor, Richard Edlund.)

Now about that soundtrack, composed by John Carpenter “in association with” Alan Howarth.

The score is of a piece with the movie, which is to say that it’s incredibly entertaining, sometimes corny, extremely insane, and most importantly – propulsive.  The score matches the editing, and it MOVES.  It’s functional, which is frankly an unsung virtue of a good score.  It also smartly delineates character, with its darkly regal Lo Pan orchestrations, its varying strains recurring during the appearances of the Storms, its eerie themes suggesting the ancient pseudo-mythology of the movie and even the driving rhythms under several of the action scenes which resemble nothing so much as an 18-wheeler idling, apropos for Jack Burton’s profession.

Like most of the scores from Carpenter’s movies, the music is almost entirely done on synthesizers.  In the liner notes, Carpenter and Howarth discuss how much fidelity they paid to authentic Chinese music, which is to say, none.  They went after sounds and themes that sounded Chinese to them, rather than working arduously to replicate realism.  I actually respect this approach.  I’m not sure it would’ve helped the movie to have that much attention to detail.  BIG TROUBLE IN LITTLE CHINA is a tribute to the kung fu B-epics of the 1970s – it’s very Shaw Brothers.  Reality, it’s fair to say, is not this film’s ultimate aim.  Some might say that such musical guesswork is the methodology of the Ugly American, but personally I’m more irritated by cultural imitations.  Carpenter and Howarth are owning up to their lack of authoritative expertise in all things Chinese, and giving it a shot anyway, and in its own way, that’s charming.

Besides, Dennis Dun’s character is more the traditional hero of BIG TROUBLE IN LITTLE CHINA.  He’s the young, clean-cut lead out to rescue his lady love.  Conversely, Kurt Russell’s character is the ultimate Ugly American (John Wayne bluster and all) – therefore, these cultural concerns are actually structured into the film.  It’s all just a little bit subversive, though of course, not at all Important with the capital vowel bolded.  It’s difficult to call racism or even exploitation (though some apparently tried, during the initial theatrical run) when the film in question is so silly, or more to the point, when the two most charismatic performances in the entire movie are from two elderly Chinese men.  What other big-studio American action picture has ever given us that?

That’s the basic conclusion I’m drawing here, by talking about the score in specific and the movie overall – BIG TROUBLE IN LITTLE CHINA is an anomaly, a curiosity, and a legitimate original.  This is why a cult has grown around this movie, and the cult is not giving signs of going away.

Almost makes me wonder what else I was right about at ten years old.

BIG TROUBLE IN LITTLE CHINA is the midnight movie this weekend at the Film Society Of Lincoln Center. (Get showtimes and tickets here.)  It’s screening there in spiritual kinship with this year’s New York Asian Film Festival.  (Find out more about THAT here.)

For more illuminating talk about this luminous film, listen to our friends over at the Above The Line podcast.