Home  ⁄  The Wire  ⁄  [Joysticks] A Look Back at Sierra’s PHANTASMAGORIA

Humble Bundle is a great service. You get great deals on products like games, comics and books, you get to donate to charities and you also get to help out indie developers. This month’s Humble Bundle is focusing on Sierra, publishers of such favorites in the point and click game genre like KING’S QUEST, POLICE QUEST, SPACE QUEST and this writer’s personal favorite because while not a typical quest per say it was a forbidden part of childhood computer usage…LEISURE SUIT LARRY. (LARRY is sadly not part of this bundle.)Depending on what you donate you can get digital copies of several other games but for the basic one dollar donation you get quite a lot of puzzle solving games, including 1995’s horror puzzle-adventure PHANTASMAGORIA.

PHANTASMAGORIA came out in 1995 during the height of the popularity for full motion video games, games that used real people in front of three-dimensional, and made a pretty big scene upon it’s release. Besides being full of violence, gore and sexual content (even a controversial scene involving sexual abuse) the game was also also infamous due to having a very large budget. While it’s clear that FMV games require a strong amount of work the fact that Sierra brought in the likes of The Character Shop to do effects work should be a pretty clear indication that they were wanted this game to be a big deal. The game is a point and click adventure with full motion cutscenes that move the story along. The story was represented a change in the gaming industry, being developed by Roberta Williams who had already made a name for herself with the iconic KINGS QUEST series. The grim, foreboding atmosphere and depraved acts of violence were a far cry from the fantasy settings she was known for, but Williams had a serious knack for horror. 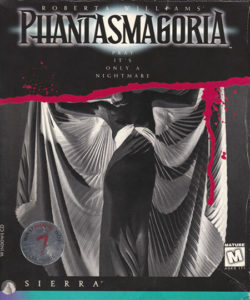 The story of the game centers around Adrienne Delaney (played by Victoria Morsell) who moves into a secluded mansion with her photographer husband Don (David Homb). Adrienne finds herself having horrible nightmares involving gruesome torture. The mansion they’ve taken residence in was previously owned by a 19th century magican by name of Zoltan “Carno” Carnovash who had five wives, all of whom disappeared under mysterious circumstances. You know, like they do. What follows is a twisted journey from Adrienne’s perspective as she discovers not everything is what it seems in the old Carnovash place. Worst of all though is that the spirit of Carno has taken over Don’s body and is starting to become abusive and destructive towards anyone who seems to cross his path. While this sounds fairly typical by today’s standards you have to consider that at this point there really wasn’t anything quite like PHANTASMAGORIA. Horror games existed (CASTLEVANIA, SPLATTERHOUSE) and in 1992 you had what is considered to be the progenitor of the survival horror genre itself ALONE IN THE DARK. ALONE IN THE DARK arguably has the the closest relation to PHANTASMAGORIA in the sense that you are not taking the role of an action hero but instead a normal person who finds themselves wrapped up in a horrible situation, like most horror films. The biggest difference here being the aforementioned FMV technology that gives PHANTASMAGORIA a style of it’s own that others would try to utilize with mixed success such as 1996 cult favorite HARVESTER. 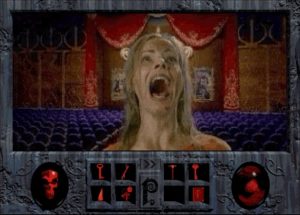 The player spends a lot of time watching the story unfold as opposed to necessarily “playing” the game, but thankfully the story is told exceedingly well. Williams and company seemed to feel that the story was the major sell of this because they deliberately tried to make the game’s puzzles less obtuse than others. You feel as though you are watching a 70’s era low-budget horror movie, not z-grade lower production but more so along the lines of maybe a Hammer film that you play a small role in as the player. The acting ranges from delightfully cheesy to genuinely well done, especially in the case of Morsell who plays Adrienne as a likable heroine you really don’t want to see suffer. She almost sort of gives of a Nancy vibe from NIGHTMARE ON ELM STREET, a character who finds herself combating a demonic force from beyond the grave. The game has a wonderfully unnerving atmosphere as well thanks to the music used. A low harpsichord tune wanders the background of scenes ramping up tension while the usage of Gregorian chants punctuate moments. The game doesn’t rely on jump scares and instead uses it’s disturbing subject matter and music to try and keep the player/watcher on their toes throughout the run time which is admirable and definitely a different style than what a lot of horror games nowadays tend to do. 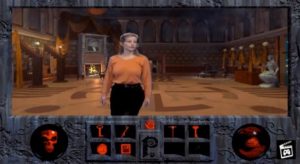 The game was  extremely controversial upon its release due to the aforementioned content, so much so that retail stores like CompUSA wouldn’t even stock it, countries such as Australia flat out banned it and it was brought up in U.S senate debates regarding the regulation of video game content. The interesting thing here is when you look at it PHANTASMAGORIA isn’t a standard cut and dry video game like DOOM and MORTAL KOMBAT. Williams herself even mentioned how in PHANTASMAGORIA the player character isn’t running through rooms blowing away demons and zombies with a chainsaw or ripping someones head off with the spine attached. You are playing as a woman trying to unravel and mystery and hopefully escape with her life. Of course that isn’t to say this isn’t a violent game. I touched on the sexual abuse but the big reason this game gets brought up on occasion are the brutal scenes and if you are a gore hound then I highly recommend seeking them out if the overall game doesn’t seem like your bag because they definitely are a sight to behold, the most violent and effect laden ones happening to Adrienne herself upon failing to perform a certain action in the game. The Character Shop did some top notch work in this game and that alone gives it a reason to be revisited along with all the other aspects.

So is PHANTASMAGORIA worth playing? I would say yes if you are the kind of person who wants to experience the story unfold for yourself. Sure you can go on Youtube and watch a full playthrough, thankfully without someone providing their surely insightful commentary throughout, but for some, including this writer, that just doesn’t have the same effect. The game isn’t overtly difficult, the puzzles won’t have you scratching your head like other point and click games where the solution to a puzzle is something you had to either learn from someone else or just get lucky enough to stumble on and the story itself is entertaining throughout thanks to some great production values and acting. If anything it’s worth playing through just to see how much effort and creativity went into a game that realistically was a big gamble for a company like Sierra. This could have easily been another NIGHT TRAP, a brilliant sounding idea that just turned out to be laughable, but it doesn’t. PHANTASMAGORIA was a huge hit for Sierra games and while it doesn’t have the same legacy of games like KING’S QUEST it definitely deserves to be remembered beyond it’s gore scenes.