We’ve already gotten a taste of the sort of brutality we can expect from GUN MEDIA’s FRIDAY THE 13th: THE GAME with a short clip courtesy of Jason using a helpless counsellors head as a doorstop, now we get to see a variety of ways Jason players will get to eliminate their prey in brutal gory fashion thanks to the fine folks over at the BLOODY DISGUSTING. 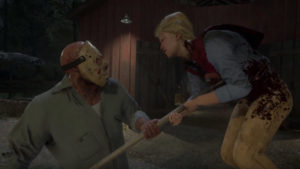 While people who might be familiar with Jason’s work thanks to his cameo appearance in MORTAL KOMBAT X  will think these lack the over the top flair of his fatalities and x-ray special, you have to remember this is Jason stalking a group of normal people, not vengeful hell-spawn and martial artists. Fans of the film franchise will notice some great homages to memorable kills such as the ending of the original FRIDAY THE 13th and the migraine inducing head crush from FRIDAY THE 13th, PART 3 sans the 3D eyeball popping out at the viewer…for now maybe? 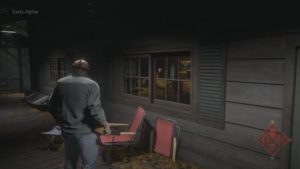 FRIDAY THE 13th: THE GAME can’t get here fast enough either way, long time fans of the vengeance filled hockey mask wearing slasher and people just looking for something new in the 1 vs. will have reason to check this out when it comes out.