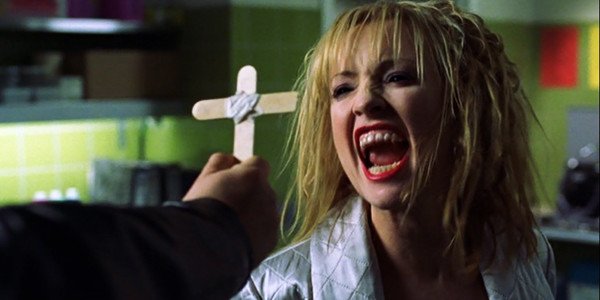 Stephen King is the most influential voice in horror of the late 20th century. His books have been best sellers since his debut and have gone on to spawn numerous adaptations in film, TV, video games, and other media. King Of All Media looks at those adaptations, starting with his TV miniseries in chronological order. Each week Alejandra Gonzalez and Rob Dean will discuss a new miniseries project of King’s — with today’s installment being on 2004’s SALEM’S LOT. 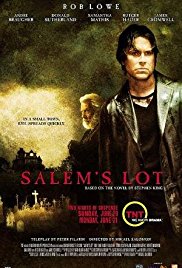 Rob Dean: If life were more poetic, this would be our final entry in the Stephen King miniseries wrap-up. We would be ending on another adaptation of the first King miniseries, and be able to see what has changed in the intervening 25 years. But life lacks that sort of symmetry so instead we still have a few more installments to go—which is good because this is not the note on which I would wish to go out on.

SALEM’S LOT (2004) is the second adaptation of King’s second novel. The two-part miniseries finds writer Ben Mears (Rob Lowe) returning to his hometown of Jerusalem’s Lot, where he falls for local girl Susan Norton (Samantha Mathis) and befriends his old teacher Matt Burke (Andre Braugher) before battling vampires that are infesting his rural town led by the mysterious and European Barlow (Rutger Hauer). There is a lot of set up in the first part to establish the town dynamics and interpersonal relationships before going full bore into the vamp action, all while being told with an inelegant framing device.

There are many problems with this version, directed by Mikael Salomon and written by Peter Filardi, but the main issue is that no one likes each other or is likable themselves. Mears thinks himself better than the townspeople and is writing a book about how evil small towns are — which is a secret he keeps from the women he’s supposedly falling for. Burke doesn’t like Mears’ writing and also seems uninterested in teaching. Susan just wants to leave town. There are a ton of petty squabbles between the other denizens of this Maine location, all of which have varying levels of disgust and deceit and mean-spiritedness. There is nothing on which viewers can purchase their stance and view the world because everyone is so off-putting. It’s a misanthropic affair that bogs down every detail so that there is no reason to root for anyone. 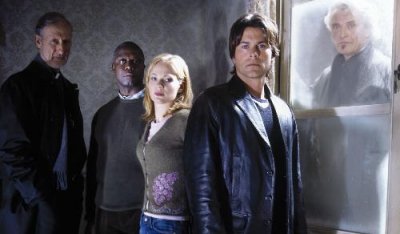 I found very little to like about SALEM’S LOT (2004). Most of it was boring and refused to engage in any meaningful way. There is a ton of acting talent involved — Lowe, Mathis, Braugher, Hauer, Donald Sutherland, James Cromwell — that is acutely wasted in dispassionate and ugly performances. There are very few creepy elements or good visuals, with a lot of bad early Aughts filters and computer f/x being used that are visually unappealing and again fail to connect with audience.

Alejandra Gonzalez: Rob, I didn’t think it could get worse than THE LANGOLIERS for me, but I am truly impressed with how awful SALEM’S LOT (2004) was. I know this adaptation was closer to the tone of Kings book, but it lacks the effortlessly haunting atmosphere that Hooper was able to accomplish with his adaptation. Actually, it seems to lack any atmosphere at all. It’s so unbelievably bland in every one of its elements that it’s hard to find anything I liked. It feels like the performances were uninterested at best. Rob Lowe’s narration, even at the very beginning, was so lackluster that I should have known it was foreshadowing what was to come. I should have known!

I didn’t really have any characters I cared about, but I did think Sutherland was okay, just scarcely used. That might be bias speaking, though, because I love the Sutherlands (looking at you, Kiefer). I feel myself getting exasperated with how miserable the entire town was just as I am writing about this. As you mentioned, the characters are not likeable and hardly even like each other. There are no relationships I care about, which means I hardly sympathize with the characters when something tragic happens to their loved ones. Mears is supposed to be the most interesting person in the town, and is still flat and slightly a jerk. Despite moving at a glacial pace, there MUST be something that justifies this three hour running time. What’ve you got, Rob? 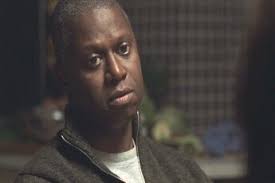 Rob Dean:  I’ve got… very little. Again, I don’t think this is the worst King TV work we’ve seen (looking at you GOLDEN YEARS and TRUCKS), but it is just unrelentingly dour and boring. Nothing of much consequence happens for over two-thirds of its running time, and then there’s just a bunch of action that barely makes any impact. Part of the problem with making every not like each other, and also kind of a jerk, is that—as you said—it’s hard to care about any sort of action or terror that befalls them. Mark Petrie goes from a fun horror kid in the book and Hooper’s version, to a bland kind of high school dick in this. And while it does actually use the reverend (Cromwell) in a semi-interesting way, he’s barely in the damn miniseries to make his conversion to evil make any sense or have any implication. I think Cromwell, Braugher, and Sutherland are fine in their roles (I liked pretending that Braugher was just practicing for his run as Captain Raymond Holt on Brooklyn Nine Nine), but they are underutilized and poorly written.

One thing that I thought was odd was the scene where Barlow (Rutger Hauer) first appears, to tempt Dud into the vampiric life. He promises Dud that he will no longer suffer any of his physical afflictions once he is turned…but he says this while wearing eyeglasses. So vampirism cures all issues, but draws the line at ophthalmology? Another bit that was poorly executed was the entirety of the Marsten house flashbacks which pop up quite often. Mears went into the house and discovered dead bodies in there and has been slightly traumatized since. Oh and there are allusions that Marsten was performing dark, arcane rituals to Elder Gods or something by killing children. That’s pretty interesting, right? Unfortunately it’s all presented in a terrible 2000’s music video filter with strobe effect and there’s nothing at all creepy or engaging about it.

Mostly, I think SALEM’S LOT (2004) is just forgettable. It’s boring and bland, but technically it’s (mostly) competently assembled. As a big fan of vampiric lore, what did you think of the vampires in this one? And how did you feel about ditching the NOSFERATU-looking Barlow from Hooper’s version for the European grandfather appearance of Rutger Hauer? Also, why do they posit that Mears is a great writer (Pulitzer Prize winning!), but everyone that has read his books in Salem’s Lot hates them? 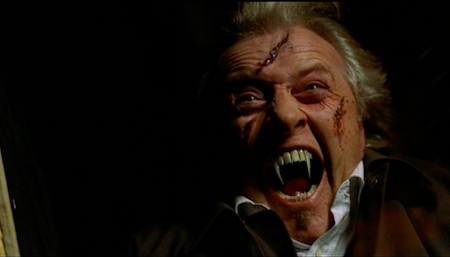 Alejandra Gonzalez:  I hadn’t even realized that Barlow promises that to Dud while wearing glasses…perhaps it was a disguise, but it will be something I laugh at forever now. As far as the vampires go, I think they looked fine but were handled in a way that made them less menacing and lacked the sort of elegant threat that I love so much in my vampires. I think they moved kind of aggressively, and to me they sometimes looked more possessed than they did vampires in the way that they walked. Also, I couldn’t get behind the blurry trail that follows them that is like “wow! these vampires are fast!”, or behind the ability one vampire seemed to have to contort themselves in order to travel through a duct. I’m glad they stuck to the classic “you have to be invited” rule there, though. I guess I just like my vampires traditional, but I know someone will appreciate anything that moves away from that.

Needless to say, I also really prefer the NOSFERATU resembling Barlow from the Hooper adaptation, as it is one of my favorite vampire designs and I think it’s effectively terrifying. He is also one of the most identifiable vampires within the genre, so I would have loved to see him modernized but similar. As for Mears, clearly the whole town is resentful and jealous of his success! But luckily, we know he’s just as miserable as the rest of that sad, sad little town.

While I had the most excruciating time trying to finish this, I am glad it’s over but sad to note we are closer to the end of our journey! I’m particularly excited to be covering DESPERATION next, as I didn’t realize it had been adapted. I know, where have I been?