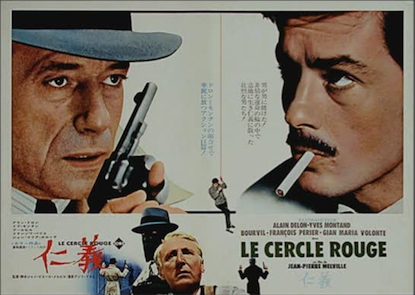 The water is wet, the sky is blue, Hollywood is going to shit in our eyeballs with remakes, I get it, but that doesn’t mean I like it. Particularly when we are talking holy-fucking-grail movies like LE CERCLE ROUGE getting the treatment. James Mangold is the latest director attached to the remake of the heist classic. John Woo, Johnny To, John Hillcoat and Juame Collet-Serra all said thanks but no thanks, and here’s hoping that Mangold gets his wits back and decides the same. Jean-Pierre Melville’s heist masterpiece is full of stunning scenes that are so well shot and executed they have been jacked and mimicked countless times since, though never duplicated and Mangold ain’t breaking that chain, folks and neither is anybody else who’s name starts with a “J”.

CraveOnline caught up with producer Arthur Sarkissian who dropped some news on the upcoming flick:

“James to me is a guy’s director. He’s from the world of the old school of movies, The Getaway, The Wild Bunch. I see him in that world. He loves movies. 3:10 to Yuma to me was one of the best remakes ever. It’s very difficult to top an original and I think he did that absolutely beautifully because I don’t think the Glen Ford/Delmer Daves version worked as well as the one he did. He’s great with actors. He loves gangster movies. He loves action. He’s good.”

Sarkissian on the original (widely considered a masterpiece):

“It’s dated. It’s just dated. The characters, if you see it, Alain Delon, Gian Maria Volante, Bourvil and Yves Montand were fantastic, but the story kind of doesn’t hold together. It falls apart and doesn’t make sense in certain areas. It’s basically pretty much the same storyline. It’s about a guy who’s in prison, who was put in prison by someone, he lost the love of his life to this gangster who put him away for five years and he comes out seeking revenge. He hooks up with this guy who’s a hitman to try and do damage to this gangster. Jean-Pierre Melville actually took from the Cagney and Bogart movies. When Jean-Pierre Melville was directing gangster movies, he was really imitating American gangster movies. We’re basically taking his imitation to bring back to what we did.”