Before we get the show on the road, I’ve got a ramble to get out.

I’ve always been interested in Dick Maas as a filmmaker because he takes twice-told tales and turns them into something engrossing, from his 1983 debut feature THE LIFT and its 2001 remake DOWN up to his Carpenter-esque Christmas tale, SINT, about a zombified Saint Nicholas (which the brilliant Rob Dean wrote about here) and I wish he had broken through to American cinema (thought he did direct the music video for Golden Earring’s “Twilight Zone,” which is a badass song). The word is, he was to do a sequel to A NIGHTMARE ON ELM STREET around this time, and so if we’re going by the year (1988), this means he passed on doing THE DREAM MASTER, meaning his gig was swept up by another foreign fellow, the Finnish Renny Harlin. But he chose to do AMSTERDAMNED, and was able to keep a lower profile, but one that’s still appreciated by horror fans seeking underrated titles, and if there’s one thing I really love – it’s slasher films that I’ve never even heard of.

For the most part, slasher films were the refuge of the American movie system as an easy and cheap way to make a few opening weekend bucks, but there were hack and slash cheapies that cropped up in other countries. There was Canada, who coupled with their tax shelter, gave lots of maple slathered dead teenager movies to the theatrical and VHS market like PROM NIGHT, MY BLOODY VALENTINE, and TERROR TRAIN. Other countries didn’t get as famously in on the act, thought there were the dual trash spectacles from trash maestro Dick Randall – 1982’s PIECES and 1986’s SLAUGHTER HIGH (both technically cheats since they were filmed in different countries, but are ostensibly “American”). Then, the Dutch got in on the cut-’em-up madness, courtesy of filmmaker Dick Maas with 1988’s waterlogged giallo/slasher infused AMSTERDAMNED, which despite its long runtime (an hour and fifty-three minutes) engages the viewer, because the potent concoction created by Maas keeps you engaged. 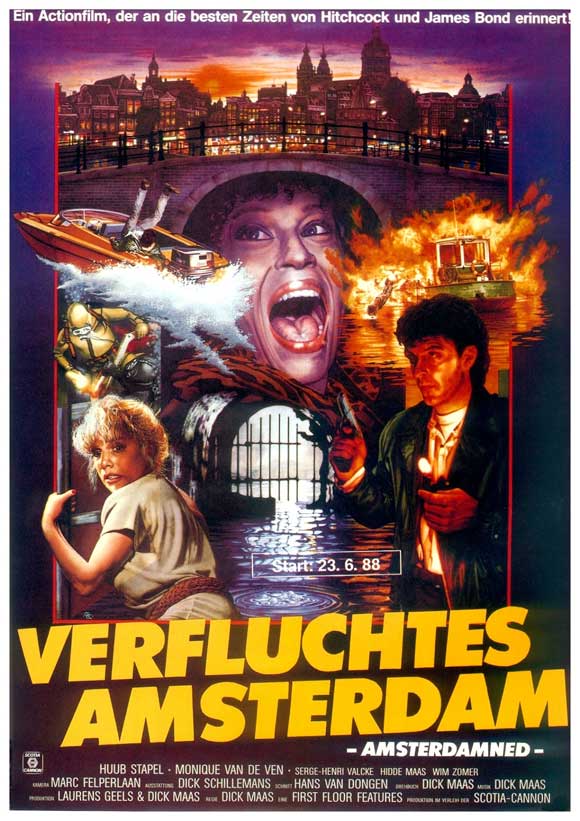 The plot of AMSTERDAMNED concerns the titular locale of Amsterdam as it falls under attack from a scuba gear clad killer as he picks off the citizens who have the misfortune to tread in and about the various canals that run through the gorgeous Dutch city. Maas succeeds at giving the film appropriate menace, from the cool, ghoulish blues that bask all the night life of Amsterdam, to the bobbing POV shots of The Diver that crop up throughout the film, the killer decked out in a black wetsuit, coupled with the menacing rasp of his breather calls to mind a 1980s small-scale sea monster film. The score by Maas himself is nicely chilling and places itself as the perfect audio backdrop for a Netherlands massacre.

To the film’s strengths, there’s not a few minutes that go by before another victim is struck down, in various ways so as to not bore the audience, because it’d be tiresome to have a repetitive set-up to each kill – victim wanders too close to the water, The Diver strikes! Here we’ve got a victim on an inflatable raft (a nasty little kill), environmentalists, and an old man on a sinking ship (a scene that calls to mind the sunken boat set piece from JAWS and the underwater preamble to INFERNO). The film is choked with dread, and fortunately, the film doesn’t try to pull any false scares on us, because a canal-submerged killer isn’t going to be prowling around an apartment.

Blending in with the slasher storyline is a fairly taut procedural with our lead character, police detective Eric Visser (Huub Stapel, once again reteaming with Maas), hunting down the madman doing all the wetwork, giving the film its giallo bones as Visser must sift through the suspects, involving red herrings aplenty, and the clues (the killer’s diving meter and knife); and battle police bureaucracy at every turn (the higher-ups naturally want this case solved as soon as possible) to find the unknown killer. There’s plenty of action throughout, too, from a car chase involving one of the suspects, to the thrilling boat pursuit that pulses with the nautical-based activity of a Friedkin-choreographed chase scene (“The Amsterdam Connection,” if you will).

In addition to the horror/crime elements at play, there’s also a wry sense of humor that permeates throughout the film, from the deadpan nature that Visser has while discovering a new victim (the guy is dead-on with a one-liner) or an old man turning himself in as The Diver. I also loved the bizarre and inappropriate interplay between Visser and his daughter Anneke (her quip when someone phones asking for her father is one for the ages). Notoriously, the film begins with the dead body of a hooker being strung up under a bridge, her bloody corpse sliding across the glass-topped boat to the horrified view of its passengers, tourists no less – a scene one could read as horrifying, but one which instead reads as hysterical.

There are a few missteps here, but none that wound the film tremendously. Visser’s daughter Anneke goes missing somewhere around the second act of the film, after a spooky scene where she and her “psychic” friend, Willy (who in the English dub has the most mature-sounding voice since Bob in CITY OF THE LIVING DEAD), head out to locate the killer. I know there shouldn’t be a need to resolve everything in Visser’s life, but it feels like they wrote the character and just forgot to give her anything to do in the last act of the film. I also wish there would’ve been more impact with regards to the killer’s identity. Not that who the murderer is matters, but if your film is built up to revolve around the mystery of who your madman is, it better come off as a big shock, rather than a shrug. I love the motivation, and I love that the killer is disfigured, but it should’ve been concluded as dramatically and compellingly as it was built up. More DEEP RED and less FRIDAY THE 13TH , in other words.

Minor issues aside, I absolutely loved AMSTERDAMNED. It’s exactly the kind of movie I wanted it to be, and as I’m always on the prowl for more slasher films, this just satisfied my craving massively. 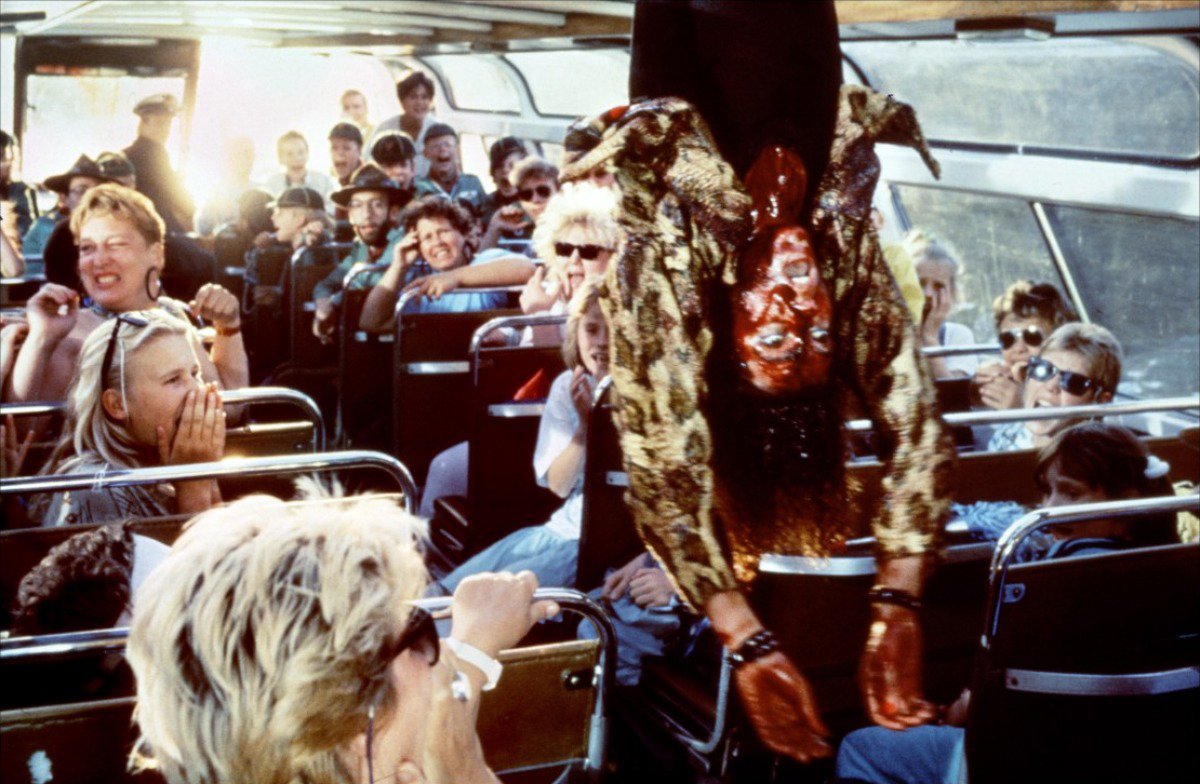 AMSTERDAMNED is currently available on Shudder, alongside THE LIFT. I recommend that you pick up both Blu-rays from Blue Underground. Everyone needs Más Dick in their lives.