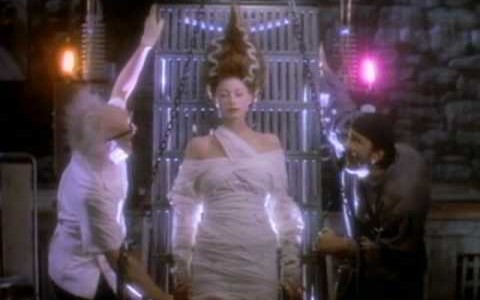 Despite their yuppie appearance fit for a mid-’80s sportsbar, Huey Lewis And The News have a surprising amount of connections to genre films. There’s the well-known stuff—they wrote the theme song for BACK TO THE FUTURE (in which Lewis has a cameo), AMERICAN PSYCHO devotes a whole monologue to extolling the virtues of “Hip To Be Square” while living the American dream of mutilating Jared Leto, and the GHOSTBUSTERS theme song was infamously found to basically be a rip-off of the band’s “I Want A New Drug.” But, in addition to that, Lewis has appeared in various roles in genre fare like .COM FOR MURDER (2002) and SPHERE, and even contributed a harmonica performance for an episode of the ’80s incarnation of The Twilight Zone.

So perhaps it’s not surprising that this preppie, clean cut bar band with its Tower of Power horn section and pleasant but forgettable pop ditties would incorporate some aspect of horror into their (ridiculously popular) music video catalogue. “Doing It All For My Baby” finds the band breaking down outside of a castle to be greeted by the likes of Dracula, Igor, a mad scientist, a mummy (that turns out to be a re-animated bride), and other Universal horror staples mostly played by the musicians themselves in dual roles. There’s a bit of a long prologue as Huey and his intrepid News make their way to the laboratory, a part that was usually excised when shown on MTV in 1987. It’s a corny throwback that is goofy but not without its charms.