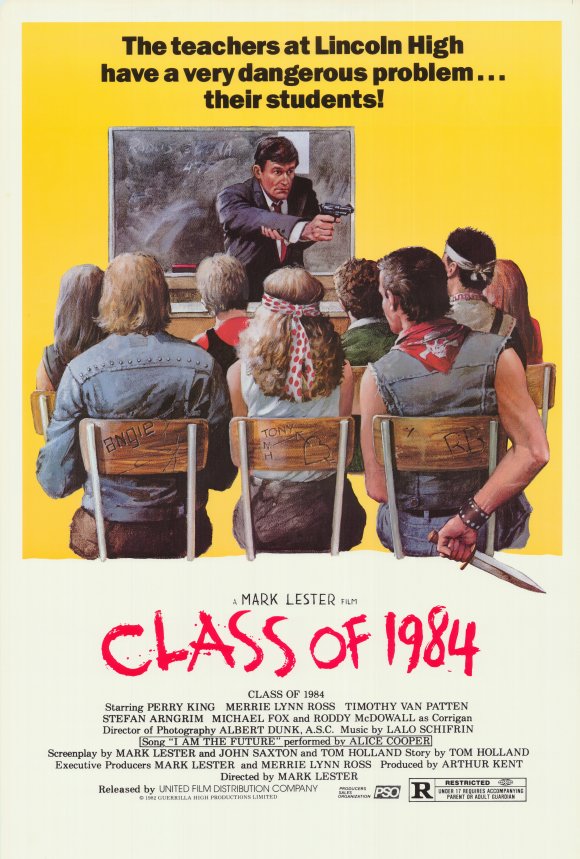 CLASS OF 1984 plays like LEAN ON ME as directed by the man who made COMMANDO, which is probably because that’s what it is. The director of CLASS OF 1984, Mark L. Lester went on to direct COMMANDO three years later. In a decade with no shortage of inspirational-teacher movies, and even a few teacher-revenge movies, here’s one that truly distinguishes itself. And it does that by virtue of its distinctive insanity.

After a text screen claiming the film is “partially based on true events,” the credits open over the various main characters arriving at Abraham Lincoln High School, to the tone-setting tune of “I Am The Future” by Alice Cooper, the shock rocker and former terror of the adult establishment who once recorded a song with the menacing lyrics “School’s out… forever!” Kids are smoking, cutting class, robbing nearby stores, and spray-painting obscenities over school signs, resulting in obliquely profane messages such as “FUCKlty Parking Lot.” 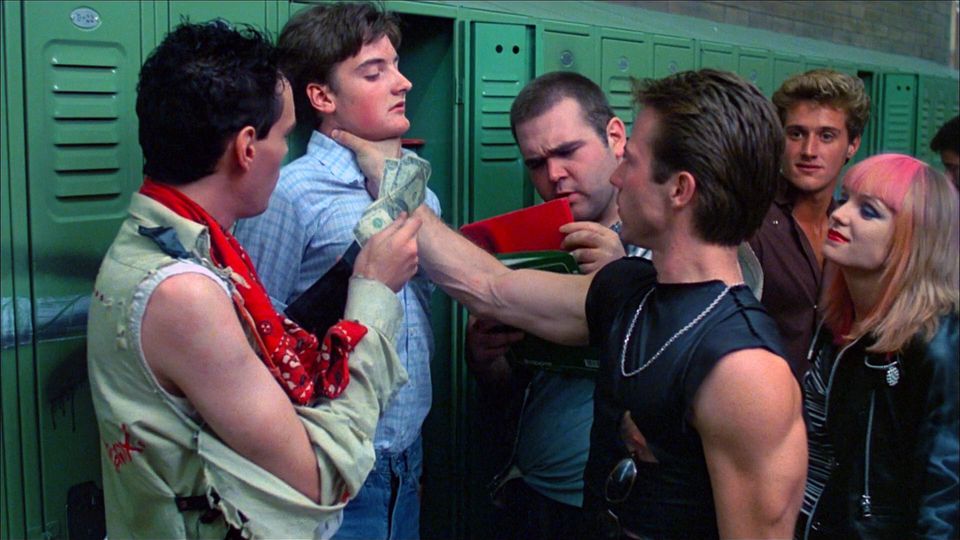 Snappily-bearded all-American music teacher Andrew Norris (Perry King) is arriving for his first day of work, where he meets nervous science teacher Terry Corrigan, played by the very British Roddy MacDowall, known best in the States for PLANET OF THE APES and FRIGHT NIGHT, and maybe not for nothing a former child actor himself. Terry keeps a pistol in his briefcase with his test papers. He takes on the role of safari guide to Norris, making pointed reference to Norris’s predecessor (who “fell” under mysterious circumstances) and then leading him inside a school that is for all the world introduced as a prison would be in that genre, with some of the same signposts — metal detectors, armed guards, unruly locals, and so on.

Enter Peter Stegman (Timothy Van Patten) and his gang. Even before he says a word, Stegman is framed by the camera to indicate importance, the crowds parting for him and his way paved by eager and more vocal thugs, and in fact he’s the film’s signature character. For the record, Stegman’s first line of dialogue is “Shut your hole, you little dyke!” It’s fascinating at this point to note that CLASS OF 1984 arrived the same year as FAST TIMES AT RIDGEMONT HIGH. The latter film was an ensemble piece favoring Jennifer Jason Leigh’s character on the page if anyone, but in everyone’s collective subjective memory, the star of FAST TIMES is Sean Penn’s Jeff Spicoli, the surfing stoner who perpetually frustrates the uptight history teacher Mr. Hand, played by old-Hollywood veteran character actor Ray Walston. Spicoli is a comedic character and Hand is his fuming foil, Bugs-and-Elmer style, which is all the more ironic considering the fact that Sean Penn quickly went on to become one of the most hyper-serious dramatic stars of his generation. 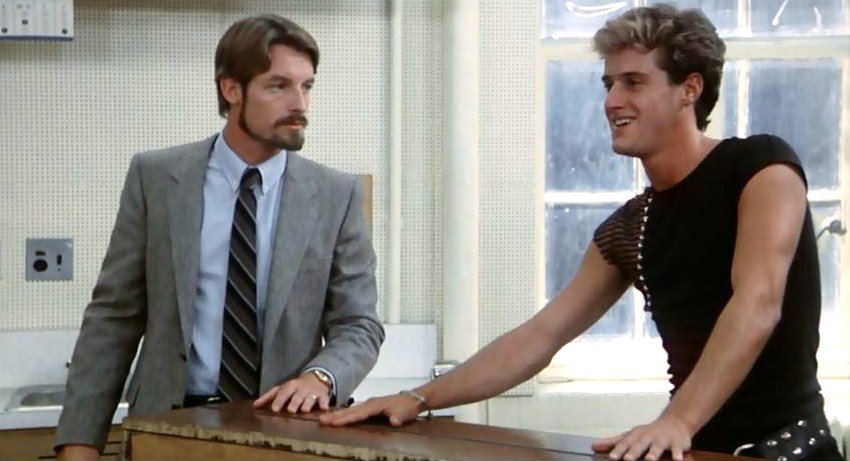 The sadistic predator-prey relationship between Peter Stegman and Mr. Norris is the Hellish inversion of the Spicoli-Hand dynamic. The comparison is more obvious in light of the fact that Tim Van Patten in this film somewhat resembles the Sean Penn of the 1980s, minus the long blond Spicoli hairdo. Tim Van Patten has since gone on to become one of the greatest — if not the greatest — directors of the current “Golden-Age-Of-TV” era, having helmed key episodes of The Sopranos, The Wire, Deadwood, and Game Of Thrones. Which is great, but seeing him as Stegman might make one wish he’d not transitioned out of acting — it’s a phenomenally devilish performance, simultaneously charismatic and infuriating. He’s sort of like every role Billy Zabka played during the decade, distilled into one guy — only unlike the brilliantly villainous Zabka, who played that one note beautifully, Van Patten does something truly twisted with Stegman: He gives off the faintest hint of buried vulnerability and decency, only to snatch it away cruelly from any naive adults who approach him, like Lucy taking that football away from Charlie Brown. Of course Lucy never threw a Nazi salute or called anyone a “nigger” while stomping on their guts, but that’s the perverted genius of the portrayal — Stegman does these things early on, and still Lester, writer Tom Holland, and Van Patten manage to suggest there’s going to be a redemptive moment coming.

Stegman is a born leader. The other new-wave degenerates who surround him follow his lead. Privileged, intelligent, and gifted, Mr. Norris seems to recognize and the film itself seems to argue that if only Stegman would choose a different path and take the side of the angels, the entire school’s discipline problem would be fixed. Instead, he’s an amoral sociopath, seemingly by his own choosing. Every attempt made by the painfully earnest and optimistic Mr. Norris to get through to this kid fails miserably. At one point in the story, Stegman sits down to a piano to demonstrate that he’s a prodigy, but then stops suddenly, exclusively to stick it to Norris and to dash his hopes. 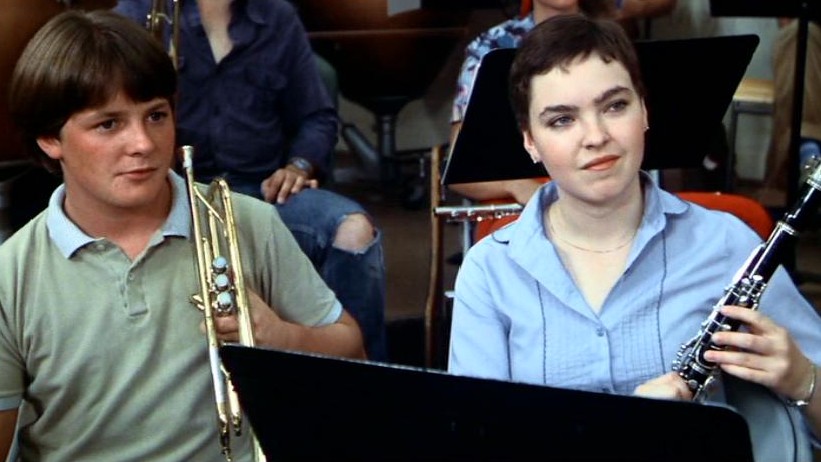 As a consolation prize, Norris befriends and inspires one of the school’s few good kids, a trumpet player and affable jokester portrayed by a very young Michael J. Fox, in all his lovable glory. You wouldn’t want to see Michael J. Fox show up on the TV show Oz, would you? It’s just not a good sign. The fact that Stegman and his goons even bother to show up at school at all is an indication of their nastiness — as the film progresses Stegman is revealed as a super-criminal out of a later Charles Bronson film, a rich kid running drugs and whores out of a nightclub and waging gang wars in the streets. Why does he even bother to show up at a music class and track down the teacher at home? It’s like his true business is stamping out civility and goodness wherever a sprout begins to grow. 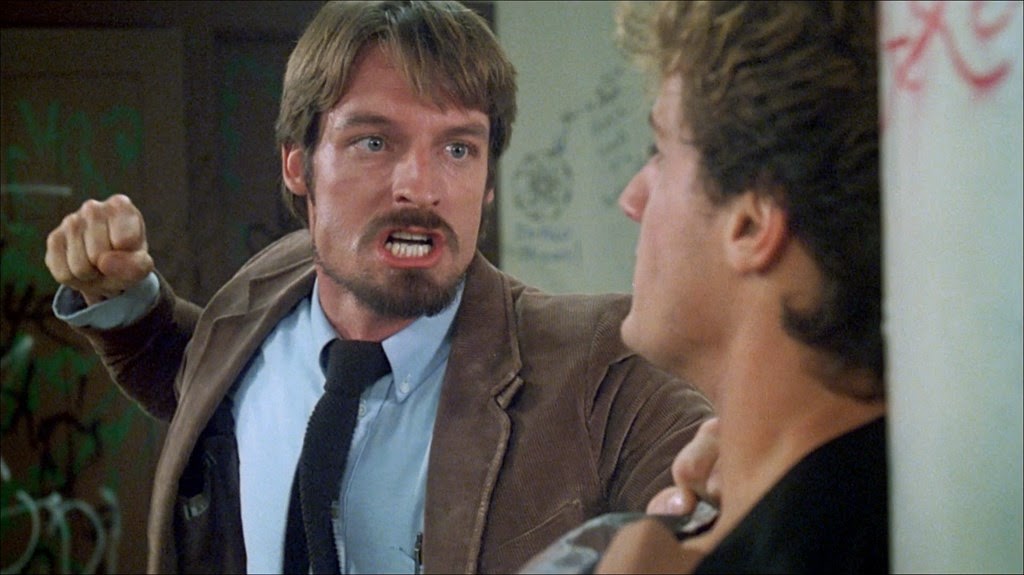 It’s this spirit of true anarchy that explains why CLASS OF 1984 is revered as a punk film. His fashion sense is oddly more restrained than the outright punkers who follow him around, but Peter Stegman is a pioneer to kids who look to Tyler Durden as an aspirational figure — Stegman may be meaner, but in the scene where he beats himself bloody in a bathroom in order to frame Norris for his own injuries, he’s got FIGHT CLUB beat by seventeen years. From there, his devious strategies grow even darker, and Mr. Norris’s only choice becomes a full-on transformation from music teacher to action hero. In the end, it’s very clear who CLASS OF 1984‘s villain is meant to be, but considering the way he single-handedly knocks the inspirational-teacher genre on its ass, the twisted achievement of Peter Stegman, and Tim Van Patten, and CLASS OF 1984, should not go under-acknowledged. 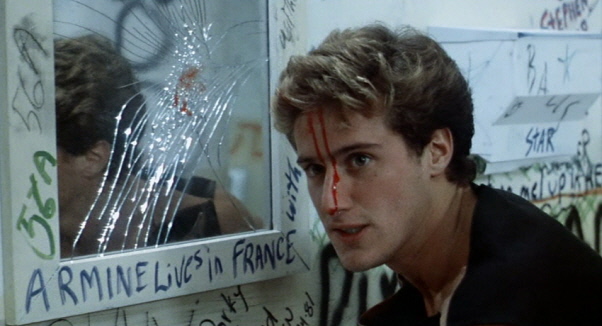 I mean — as many foul-hearted villains as the cinema has given us –have any ever committed any act this heinous? 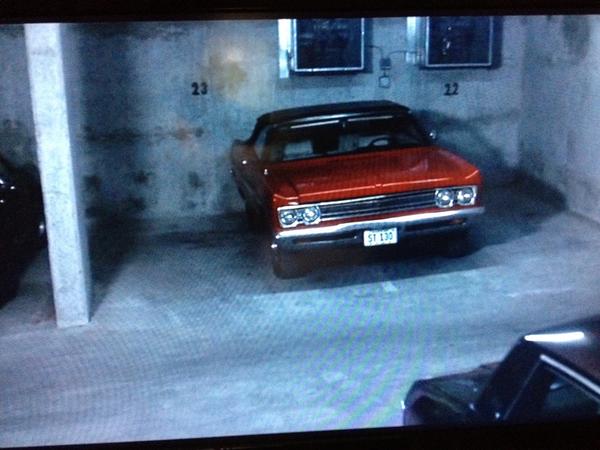