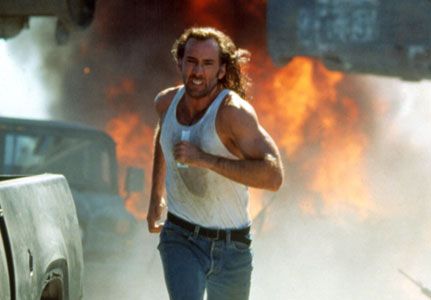 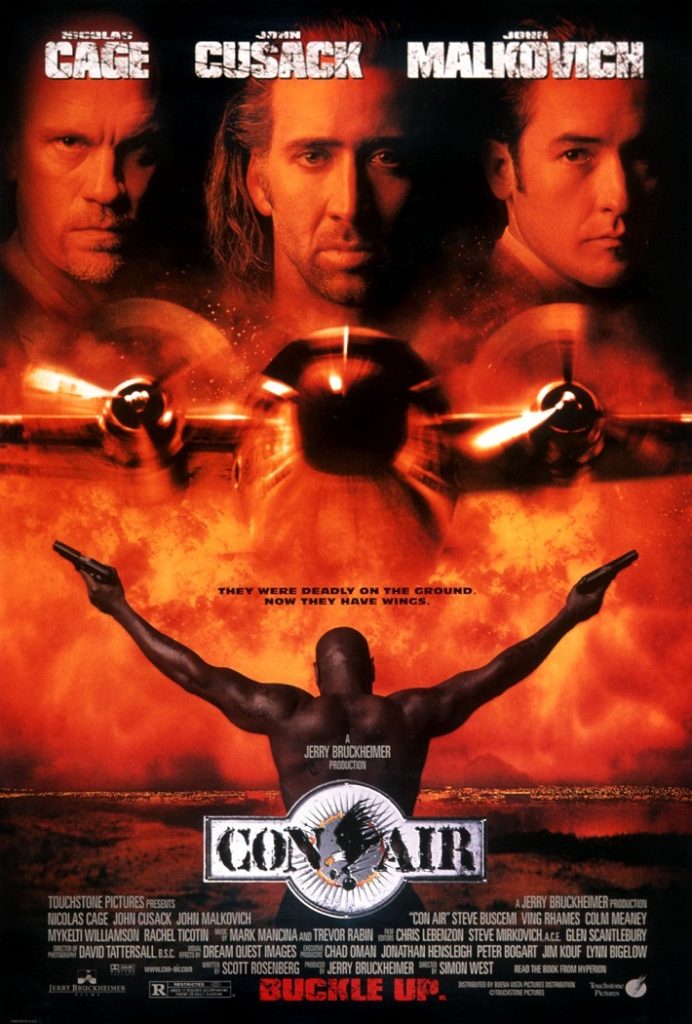 Nicolas Cage appeared in two massive action epics in 1997. One of them was helmed by one of the greatest action directors who has ever lived, and the other was directed by Simon West. CON AIR has many champions and I am one of them, but it isn’t exactly an auteurist work (I think veteran editor Chris Lebenzon, along with Steve Mirkovich and Glen Scantlebury and their team, deserve a lot of credit for holding together a sometimes sloppily-shot film), unless of course a producer can be an auteur. This is one of the finer blockbusters of the Jerry Bruckheimer era of multiplex dominance, belonging to a genre I will call, for lack of a better term, “man-camp.” An appreciation for camp is generally attributed to gay audiences, but I’d argue there’s a kind of camp pitched to straight men, and this would be a prime example. When movie characters are writing messages in Sharpie on the bodies of dead men and then throwing the bodies out of airplanes, that kind of goes beyond your run-of-the-mill over-the-top action outlandishness. Maybe the red states deserve their own SHOWGIRLS, even if they don’t think they want one.

Writer Scott Rosenberg clearly spared no restraint in naming the cartoonish convicts in the film, and as usual for the action extravaganzas of the mid-to-late ‘nineties, the Bruckheimer machine stacked the deck with brilliant character actors. John Malkovich is the alpha-creep as Cyrus “The Virus.” Ving Rhames plays Diamond Dog, apparently a David Bowie fan. Steve Buscemi does a baby-Lecter thing as Garland Greene, “The Marietta Mangler.” Danny Trejo’s character is named Johnny 23, for extremely unpleasant reasons. Nick Chinlund plays stone killer Billy Bedlam. A very young Dave Chappelle, as Pinball, plays an early variation on his later “Tyrone Biggums” crackhead character. MC Gainey pretty much steals the show as the Nugent-esque Swamp Thing. Explosions play a major supporting role. Really, the explosions were snubbed by the voters of the 1997 Academy Awards. They wore such a nice dress that evening and everything.

Then there’s Nicolas Cage in CON AIR. Here we see one of the most unfortunate hairdos in a career that has seen a surplus of those. He looks kind of like Waingro, in a movie that actually already has Waingro in it! The Southern accent Cage uses as Cameron Poe, disgraced Army Ranger, is fairly unfortunate, but it’s hard not to suspect he knows that. In any other movie, Cameron Poe would be the weirdest character, but here Cage is playing the deep-blue hero so he is comparatively reined-in. That’s comparatively. You ought to see how much the other guys are mugging. Next to Malkovich and Rhames and Buscemi and Trejo and Gainey’s green Army helmet, Cage is only about 65% of what’s ridiculous about CON AIR, but make no mistake, he’s still ridiculous. His ridiculous performance is perfectly matched to the ridiculous tenor of what co-star John Cusack called at the time “an apocalyptic clusterfuck.” I would bet good money Cage is in on the joke far more often than his clip-culling YouTube mockers and GIF-happy social-media users seem to assume.

Speaking of betting, it’s worth noting that this is one of several Cage movies, along with HONEYMOON IN VEGAS and LEAVING LAS VEGAS, to come to its conclusion in Sin City. Any decent retrospective of an important artist should notice patterns and themes as they emerge. Here Cage returns to Las Vegas again, which speaking in terms of iconography is always just a hip-thrust away from Elvis Presley. CON AIR might have Lynyrd Skynyrd and Trisha Yearwood on the soundtrack, but those are superficial trappings, not the musical heart of the film. If FACE/OFF is opera, CON AIR is rockabilly. Between WILD AT HEART and “Tiny Elvis” and the whole Lisa Marie era, there’s a lot of Elvis haunting the work of Nicolas Cage, particularly in the 1990s. This time out, call it “Jailhouse Rock” crashes “Viva Las Vegas.” All of that said, it might be time for Nicolas Cage to do a musical.