For a very brief moment in time the incredibly popular sub-genres of aquatic horror and exploitation based off 1979’s ALIEN collided. 1989 saw the release of THE ABYSS, DEEPSTAR SIX, and LEVIATHAN—with THE RIFT (aka ENDLESS DESCENT) coming out in 1990—and all featured an isolated crew in the unforgiving depths of the ocean encountering creatures and various personnel disasters. It was an extremely confusing time at the video store when they all came out, but it did lead to two out-and-out great popcorn movies and two lesser titles that have some fun monster stuff in them. UNDERWATER is less a descendant of those films than it is a repurposing of the same premise that directly channels (and visually references) ALIEN as much as possible. Directed by William Eubank and written by Brian Duffield & Adam Cozad, UNDERWATER has multiple impressive assets and strong sequences, but is inconsistent with its execution—effectively watering down a lot of its promise. 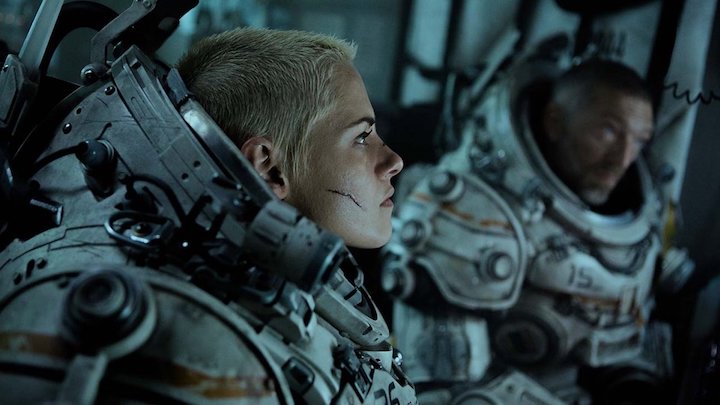 Deep in the Mariana Trench sits a staffed station that manages a massive drilling operation pulling up various minerals and materials from the bottom of the sea. When the drilling goes awry and an earthquake ensues, the lab begins to swiftly fall apart and its core heating up towards explosion. Some personnel escape, some die, but Nora (Kristen Stewart) and a handful of others are stuck and have to leave the large apparatus in massive diving suits in order to make their way to another station for the escape pods there. Led by Captain Lucien (Vincent Cassel), this ragtag group of survivors (including John Gallagher Jr, Jessica Henwick, Mamoudou Athie, and TJ Miller) suit up and navigate the collapsing structure and obsidian waters, before they realize there is something in the water with them.

Much like Eubank’s last film, 2014’s THE SIGNAL, there are a bunch of great elements to UNDERWATER but also a bunch of pieces that feel undercooked (or possibly meddled with in post) that leaves the whole movie feeling (deflated sigh) fine. Stewart is a terrific Ripley descendant—complete with underwear wardrobe and appearing soft-spoken but with many reserves of strength—who is able to be badass and vulnerable depending on the situation; she is a determined fighter, but clearly each loss and disaster takes an emotional toll. 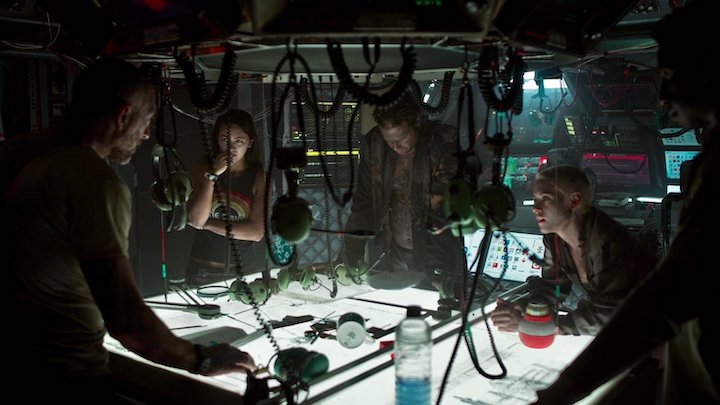 The rest of the cast are all pretty good in their roles, but almost all are terribly underwritten with Jessica Henwick’s Emily the Research Assistant being the only other character that gets really fleshed out. To be fair, these types of cinematic adventures rarely have much beyond a couple of well-defined roles and then a bunch of stock figures (can anyone tell me anything about who Lambert or Kane are in ALIEN beyond just what befalls them?); so it’s not a necessity to have detailed backstory or clear job descriptions for each character, but it would be nice.

UNDERWATER’s costume and production design is incredible. The suits that the intrepid crew utilize to walk around the ocean’s floor are gorgeous ergonomic blends of mecha designs and exoskeletons that look like something out of Hideo Kojima’s sketchbook. The various stations, with their displays and corporate signage, are exquisitely created and truly gives a sense of a lived-in world and atmosphere that helps sell a lot of the scenes. The ocean floor where the majority of the film takes place—in hazy dark water with craggy rocks and rough sand—is suitably ominous and creepy. Even the creature designs are pretty impressive (if perhaps not making the most sense in an evolutionary biology way) and effectively sinister.

The problem rises from capturing all of this good stuff—whether it be the great design work, scary moments, or compelling actors. Sometimes UNDERWATER is shot beautifully, allowing the audience to take in all of these cool bits. Or, if not aesthetically pleasing, it creates a sense of claustrophobia and panic as the shots are underlit and cramped. Both effective approaches that are a bit incongruous with each other, but mostly work together. However, there a large amount of the cinematography is muddled and choppily edited that goes from found footage-esque first person POV, to obliquely outside the group, to extreme close-up on faces; perhaps meant to create an empathetic feeling of disorientation, but the result is aggravating and messy.

Similarly, there are moments that are meant to feel grounded in the real—replicating the darkness and layout of the environment or various scientific and mechanical factors at work—but those will get tossed out for impossible physics, odd behavior, or handwaving technobabble to allow the next action or horror sequence to occur. Much like Weyland-Yutani before it, there are some funny bits of corporate satire with pre-recorded messages and stock graphics—but there’s a lack of finesse in how they are handled to remove either the subtlety or being completely overt (like ROBOCOP). It’s a movie where it feels like there’s one good step forward and then two unfortunate steps back at all times, resulting in UNDERWATER being a collection of half-measures and unrealized potential. 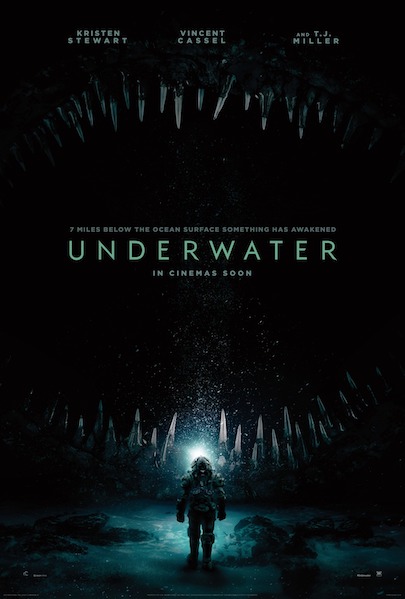 Every positive aspect of UNDERWATER leads to considering some weird bit of the script or execution that undercuts those achievements. This happens from the jump—with the minimum backstory being unnecessarily told through newspaper articles, and then no other descriptors used on screen until text suddenly shows up 2/3 of the way through for other locations. There is no consistency with the way scenes are captured or information is presented or even its own internal logic (it’s a tight knit crew that have been working together in a confined space for a long time…but one of the first interactions is someone introducing himself to Nora).

It’s almost a good thing that so much of UNDERWATER is forgettable, because poring over these details is maddening to find odd decisions that reveal a lack of a cohesive vision or intent. UNDERWATER was originally supposed to come out in 2017 before being put on the shelf (ostensibly due to the Disney/Fox merger) until January 2020; it would have been nice if that time had been used to take all of these good ideas and strong pieces and made sure they fit into a well-executed movie. Unfortunately, that isn’t what happened and the result is a slice of aquatic ALIEN-sploitation (that also borrows from PITCH BLACK and THE DESCENT) with some cool stuff but is mostly frustrating and unmemorable.