Hey, remember The Sopranos? You know, probably the greatest TV series ever? Remember how observant, how precise, how perceptive, how funny, how unusual it was? What if I told you that the creator of The Sopranos, David Chase, the man who wrote many of the most memorable episodes of the show, went on to make a feature film? And that it features the star of The Sopranos, the wonderful James Gandolfini, in a major supporting role? Wouldn’t you want to see that? Why wouldn’t you want to see that? 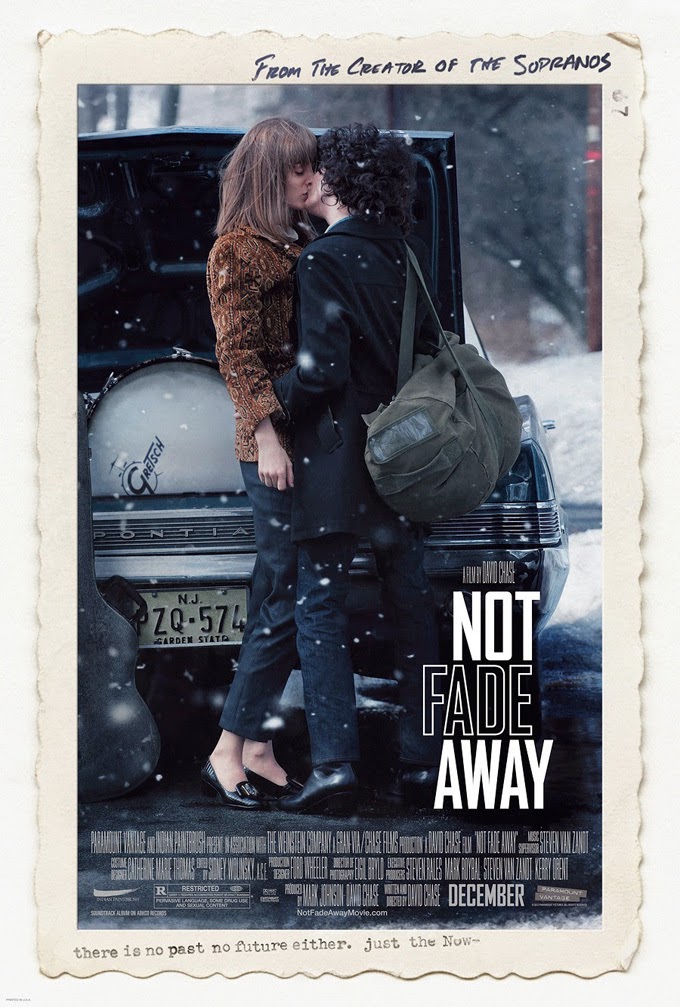 ?If you do, you’re in luck: NOT FADE AWAY is David Chase’s directorial debut. If you know one thing about David Chase, it’s how much he loves music. This movie is positively stuffed with music. Most of it is great. Steve Van Zandt was the film’s music supervisor. That’s one of the greatest curators you could have. David Chase is clearly a man of taste as well. The soundtrack is phenomenal. I said only “most” is great, though, because the story centers around a band of teenage rock wannabes in the 1960s who, believably, aren’t instantly as great as they intend to be.

?William Goldman once stated that one thing movies don’t do well is the passage of time. NOT FADE AWAY is a rare exception. Though it is certainly episodic and perhaps spread too far over too many characters, NOT FADE AWAY does an incredible job of spanning decades, covering multiple eras in American music, and showing the changes, developments, and regressions of its lead characters. Thirty-year-old John Magaro, in the lead role, is particularly impressive as a snot-nosed high-schooler who becomes a sometimes-obnoxious hippie-type and then a more compelling type of young-adult dreamer. His frequently-contentious relationship with his disapproving father, played by the late, great James Gandolfini, is recognizable and quietly powerful. When Dad’s validation finally comes, it’s in a minor key, for subtly urgent reasons, which makes it all the more unforgettable.

?NOT FADE AWAY is populated largely by unknowns – if you recognize an actor, they generally aren’t in the film much. Between that and the probability that most people probably wrote it off as a rosy-glow nostalgia piece, it disappeared more quickly than could be expected from the feature debut of such a great pop-culture artist. There are flashes of the fantastically dark, cynical David Chase humor (i.e. a certain scene involving a motorcycle accident), but mainly NOT FADE AWAY succeeds on meticulously-observed, elegantly-staged moments of vibrant and sometimes-frustrating humanity. It deserves a look.