The credits of ORCA – or as the poster calls it, ORCA: THE KILLER WHALE! – are stacked with the names of crucial collaborators on some of the greatest movies ever made. Luciano Vincenzoni and Sergio Donati are credited with the script. Between them, these two wrote on THE GOOD THE BAD & THE UGLY, FOR A FEW DOLLARS MORE, and ONCE UPON A TIME IN THE WEST, among many others. (In addition, IMDB lists Robert Towne of CHINATOWN fame as an uncredited screenwriter as well.) ORCA’s genuinely affecting score is by Ennio Morricone, in my opinion the greatest film composer who has ever lived, and himself as much a contributor to some of the aforementioned movies as Vincenzoni and Donati were.

This, however, is not a movie that Sergio Leone would have made. 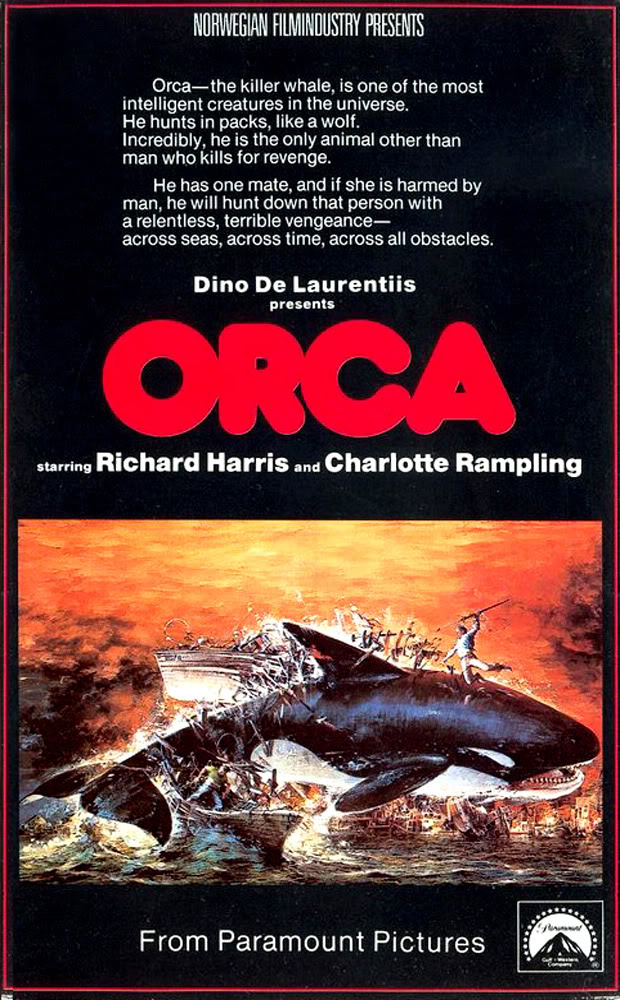 ORCA was released in 1977, two years after JAWS became the most successful movie of all time until that point. All that ORCA shares with JAWS are its obvious intentions to capitalize on the success (well, that and a cameo by a great white, but I’ll get to that in a moment.) JAWS is a fairly classical movie, a nautical adventure story melded smoothly with horror-movie tropes. It also has a sly sense of humor, which ORCA is very much lacking. ORCA is by no means a bad movie, but even its defenders – are there any, besides me? – must admit that it is a shipwreck of conflicting and incompatible agendas.

The problem is clear from the outset: While JAWS was very clearly established as a monster movie, ORCA is somewhat confusingly set up as a tragedy.  The opening sequence of ORCA features two majestic killer whales frolicking in the surf, a setting sun in the background, the incredibly mournful score by Morricone playing underneath.  However we’ve arrived at watching this movie, we probably showed up expecting to see killer whales munching on human beings.  This is not that.  How, you rightly wonder, are we going to get from this, to that?

In the very next scene, a couple snorkelers are having a peaceful dive when they are faced with a chilling sight:  A massive great white shark, bearing down on them.  Okay, this we recognize: it makes us think of JAWS, doesn’t it now?  The divers are desperately trying to get out of the water but one can’t swim fast enough – just then, a killer whale bursts up from underneath and rams the hell out of the great white, killing it, saving all the divers.  “See?,” the filmmakers are telling us, “these killer whales are way tougher than great whites!”  Our movie’s gonna be bigger than JAWS!

Here’s what this movie isn’t reckoning on properly: Generations of human beings, through Sea World and storybooks and so on, have been conditioned to feel affectionate towards killer whales. We like them! And brother, this diver-saving scene ain’t helping matters. Whales save people who are in trouble? Okay, but we knew that already, right? How do you get them to turn on people? That’s what we want to see! How do you get the killer whales to start eating on folks?

Well, you do it by one of the most disgusting and disturbing scenes ever absentmindedly tossed up on film.

Richard Harris is the human star of the movie here, a drunken Irishman whose life is centered solely on captaining his boat. (“You like JAWS?  How about a whole movie about Quint?” Except instead of a charmingly cantankerous coot, let’s give him sad eyes and a tragic backstory.) For most of the movie, Harris’s character is a real dick. He’s a seemingly thoughtless jerk who stupidly tries to catch sea creatures to sell them off at top price to aquariums, and now, after witnessing the shark incident, he’s got an interest in killer whales.

Meanwhile, Charlotte Rampling is the naturalist who desperately tries to persuade Harris to leave the whales be. As both the narrator and the prime source of killer-whale exposition, her role is the definition of thankless. Especially because she fails to convince Harris to turn back before it’s too late. (If she succeeded, there’d be no movie.)

So Harris and his crew catch up to a pod of killer whales. They’re looking to snag a large male, but Harris’s harpooning skills aren’t what they ought to be, and he only nicks the male’s fin, horrifically skewering its mate. The female whale shrieks and starts running herself into the ship’s motors, trying to end her agony. Harris, stunned by the accident, somewhat slowly brings her up with the ship’s crane. It gets worse. The female whale was pregnant, and now, suspended in air at the end of a winch, this has forced her to miscarry. Out pops the whale fetus! It crashes to the ship’s floor, where Harris grabs the fire hose and washes it overboard. (Somehow, Spielberg never thought of that.) Harris and his shocked crew depart, hauling the dying female in tow. The male whale watches the whole thing, murder in his eyes. And that’s the one Leone touch in this movie – extreme close-ups of a character’s eyes. Even if that character happens to be a whale. 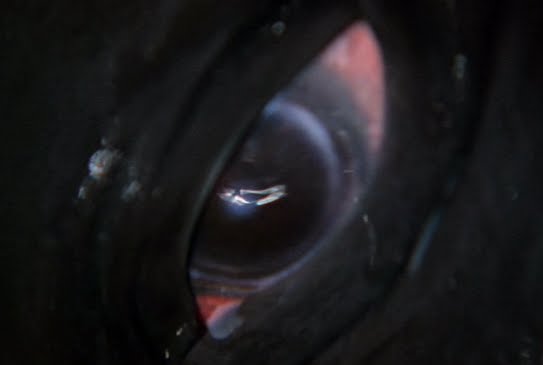 Now the male killer whale goes on a rampage, repeatedly attacking the boat and swallowing up veteran character actor Keenan Wynn. The female still hasn’t died yet, by the way: This has to be the most excruciatingly protracted accidental death in all of nautical cinema history. 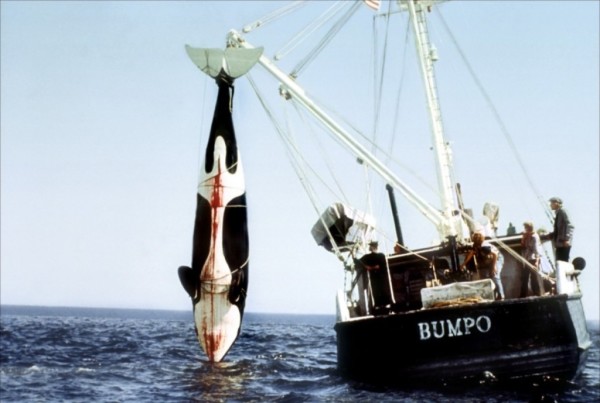 Eventually, she does die, and then it’s time for full-on orca vengeance. In case you’re actually planning to see this movie, I won’t recap any further, but I will say that this is one methodical and creatively malicious killer whale. It just keeps coming at Harris and his people, prodding Harris to return to open waters to face him. Or that’s what the wise Native American in town (Will Sampson, better known as the Chief from ONE FLEW OVER THE CUCKOO’S NEST) tells him, anyway.

All right, so ORCA is a tragic story of how man and animal are bound together by our basest emotion – revenge. One question: What’s the point? Harris may have acted rashly but he certainly didn’t mean to injure the whale’s mate. In fact, with what we eventually learn about his character’s past, Harris’s mistake compounds suffering on a Biblical level. He’s no Captain Ahab; he’s a troubled man whose terrible mistake brought further agony upon himself and all of his friends. WHY DO WE NEED TO SEE THIS, THOUGH? It’s almost unbearably sad, and it sure isn’t what we signed up for when we came to see a JAWS knock-off. We want thrills and chills from a movie in this genre, not the abject depression caused by watching the cruel whims of the universe acting against hapless man and animal. ORCA is far from a terrible movie – it’s just terribly confused.

The scene where the killer whale fights the great white came off pretty cool though, all things considered.