The trailer for the new SHAFT movie arrived today, along with this poster. 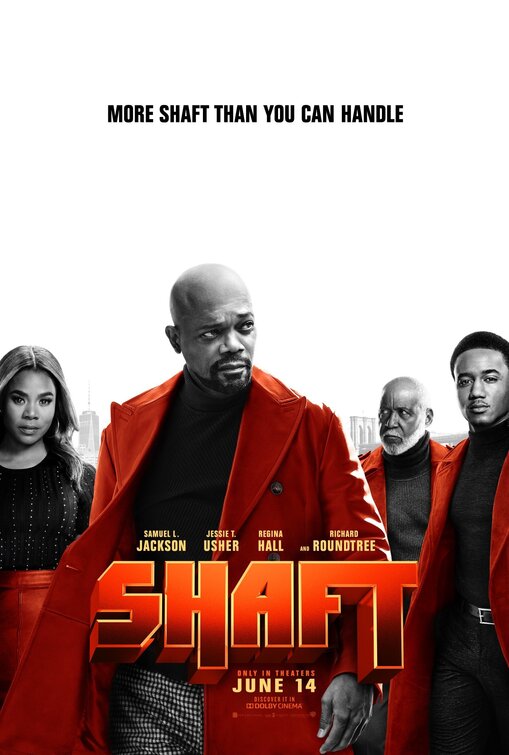 I’m way out of the habit of commenting on movies long before they’re released, since obviously I’m going to see this thing no matter what, and I always hope to be pleasantly surprised. Frequently you see internet lurkers (and some filmmakers!) complaining about critics and film writers being out to get a movie, but I promise you – nobody halfway sane goes into any movie hoping to hate it. Why else put in the two hours? We’re all going to die, some sooner than others, and we should all hope to spend it enjoying ourselves as much as possible and keeping our minds open the rest of the time.

That said, as a huge fan of John Shaft, the guy in the books and the movies and in the short-lived but amazing comics by David F. Walker, I kinda hate this trailer.

I knew they were turning it into a comedy, and I didn’t like that idea at all, and so far everything I’m seeing is exactly what I might have predicted it would be. Dick jokes and slapstick. I’m hoping for more, since one of the credited writers is Kenya Barris, creator of black-ish, but still, that’s a great comedy series. SHAFT isn’t a comedy franchise. SHAFT is black James Bond, like the trailer says. Only cooler. I’d love to see a new SHAFT movie receive the kind of heat and energy HOBBS & SHAW is getting online. Instead, this is what they did.

Trying to stay positive: I love how awesome Richard Roundtree looks in that red velvet jacket. Makes me wish we didn’t have to keep doing this thing in modern movies where we cast the younger actor in the original role and bring in the original actor just for gratuity cameos. I would fucking love a movie about John Shaft knocking around in his seventies, played by Richard Roundtree, who’s clearly still up to it. [Fun fact: Richard Roundtree is only six years older than Samuel L. Jackson.]

Biggest problem here, aside from the broad comedy of it all, is I don’t care about John Shaft’s grandson. I don’t even care all that much about his nephew, though I obviously love Sam Jackson and I did like the 2000 SHAFT well enough. (The villains were Christian Bale and Jeffrey Wright! Totally underrated as villains.)

On the bright side, I love that Regina Hall is in this movie. I love Regina Hall and I really believe she’s a national treasure. I hate that the only line she gets is the typical fun-killing wife and mother complaining to SLJ about getting their son wrapped up in his bullshit. I like Alex Shipp from TRAGEDY GIRLS too and I hope her role gets to be more than decorative.

If it were me, I’d make a SHAFT movie about Regina Shaft, where Regina Hall gets to play the daughter of John Shaft and she’s kicking in assholes and reckoning with the arguably as-the-kids-say problematic legacy of SHAFT’s gender politics.

But it’s not me, and maybe thank God for that.

And while you’re talking to Him, put in a little prayer that this movie turns out to be worth a damn, because even if you think all my other opinions are shitty, I hope we can agree that this country could really stand to benefit from John Shaft coming through right about now.