Real curious about this one, since I was intrigued by the director’s previous feature, TRASH FIRE, when I saw it at the Brooklyn Horror Film Festival a couple years back, and of course I’m down for Robert Patrick in bad-guy mode. And more than anything, I’m a scholar of the budding genre I like to call #MAGA-sploitation, by which I mean those films that either knowingly or by accident tap into the ferocious malice of this particular moment in American history; the racial, religious, even generational animus that makes every single minute of every single day in America super-charged with politics.

It’s one thing when a prestige filmmaker like Ava DuVernay takes on a project like When They See Us, which is fully intended to take on the corrosive evil at the top of this administration head-on. But since I’m a genre guy at heart, I’m really fascinated by those lower-rent titles that tap into the energy of the moment, even subconsciously. Some #MAGA-sploitation titles I could name include 2017’s BUSHWICK and KIDNAP, 2018’s DEATH WISH remake, this year’s THE INTRUDER, and pretty much the entire filmography of S. Craig Zahler. I’ve written about the prehistoric ancestors of the #MAGA-sploitation genre, with films almost nobody has heard of, like 2013’s THE BAYTOWN OUTLAWS or THE CONTRACTOR from that same year, but I think more and more you’re going to start seeing more high-profile examples of this trend in the action, revenge, and thriller genres. (Horror, eternally the most socially relevant genre, is a given.) I’m not yet sure if TONE-DEAF will be that high-profile, or even a real #MAGA-sploitation movie, but I’ll be keeping both eyes out. 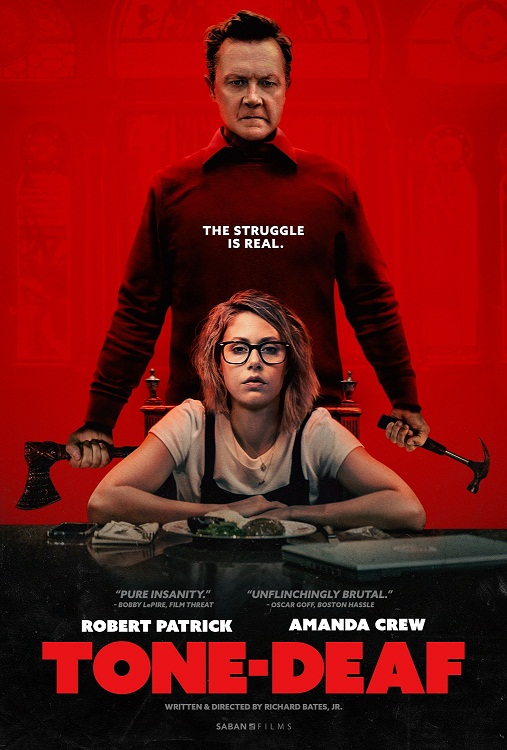 After losing her job and imploding her latest dysfunctional relationship, Olive (Amanda Crew) flees the city for the weekend, escaping to the countryside for some peace and self-reflection.  She rents an ornate country house from an eccentric widower named Harvey (Robert Patrick).  Soon two generations collide with terrifying results as Olive awakens Harvey’s homicidal tendencies and is plunged into a blood-soaked fight for her life.  More than your average slasher film, TONE-DEAF provides a dark critique of the bizarre cultural and political climate that currently exists.