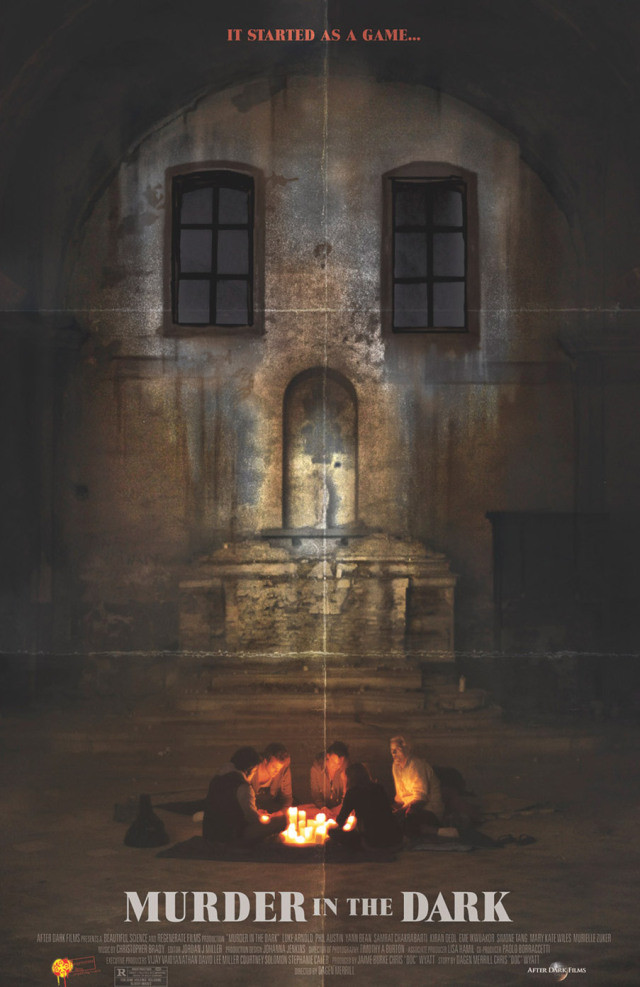 I’ve watched slasher films almost as far back as I can remember. I’ve seen every cinematic device employed that would possibly make sense, and even several that didn’t make sense. I can’t remember the last time I was surprised by a plot twist. ANd MURDER IN THE DARK definitely threw me a curve ball. If you are a fan of director Christopher Guest’s comedic movies BEST IN SHOW, A MIGHTY WIND, or FOR YOUR CONSIDERATION, just think of that style of film-making used on a who-done-it slasher film with a very serious tone, and you have MURDER IN THE DARK.
When making a memorable slasher film, always open with some action. MURDER IN THE DARK does just that. A young girl being tortured by an unseen villain is a good start.
Then cut away to a group of foreigners, all different races, sexes, and ages, driving along the Turkish countryside and picking up a hitch-hiker named Kevin (Luke Arnold). I’ve said it once and I’ll say it a million more times: It’s never a good idea to pick up hitch hikers. MURDER IN THE DARK never clearly defines how the group of people are connected. At one point the audience is led to believe that they are on a couples’ get-away, and then later we are told that they are medical personnel on a work vacation. I guess the audience doesn’t know, because the actors themselves don’t know. Which makes the whole thing awkward, but still intriguing.
The group stops for the night and sets up camp in ancient Turkish ruins. I love this setting. It’s got a great Gothic feel to it. Of course, during the night the group decide to play the party game MURDER IN THE DARK, hence the name of the movie. It’s a simple game where the players have to eventually figure out who the killer is before they get killed, figuratively speaking. This group is just filled with good ideas. During the game, the hitch hiker keeps pushing himself on Taylor (Mary Kate Wiles) a younger female member of the group, who is naive and seems to like the attention, but it comes off as being creepy.
After a rather slow build-up, there is finally a death in the group. No witnesses, fingers start to get pointed, and it’s time to figure out who the killer is — just like in the game they had played the night before. Now the van won’t start and they are all trapped. This put me in mind favorably of the 1985 PBS movie FORTRESS.
So besides the creepy hitchhiker being an outsider of the group, he’s also caught taking pictures of the dead body. We’re being led by the nose to believe that Kevin is the killer. This is becoming a very smart, retro who-done-it, like something out of Australia in the early 1980s. Even though the characters are never clearly fleshed out, the actors are great at taking a grip and holding on. Very fresh and real.
Paranoia is growing in the group, and everyone is a suspect. People are being killed off one by one when no one is paying attention. It’s shocking when during a heated argument, the Indian character Ajay (Samrat Chakrabarti) kills the African character Solo (Eme Ikwuakor) in front of everybody, and nobody freaks out. Also, why do people keep going to sleep? There is a serial killer on the lo0se harvesting organs.  To add to the tension in the film, there are periodic flashes of light that are never explained.
Things speed up quickly. There is some graphic gore while we see one member of the group, a doctor, reach into a stapled-up wound. The splatter is kept to a minimum, so this scene is not one for the gorehounds. When the killer is revealed, the whole thing seemed rushed, which is never as fun for the audience.
I’ve never seen a horror movie like MURDER IN THE DARK. If you watch past the credits, it’s explained that the script was never given to the actors. The actors were actually not allowed to see the script, and the course of the movie changed as the actors interacted with each other. The filmmakers left them clues to figure out the mystery. It makes sense, then, why the dialogue seemed so natural and unscripted. MURDER IN THE DARK is odd, and at times hard-to-follow, but if you want a unique viewing experience, this is one you have to check out.