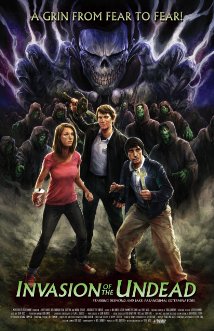 Mixing horror and comedy is incredibly popular in low-budget productions, but it’s rare to find a director (or cast) with the skill to pull it off. Therefore I was extremely pleased by the imaginative and colorful INVASION OF THE UNDEAD, which has style to spare and a polish that puts most of its low-budget brethren to shame. Fans of GHOSTBUSTERS (and more violent variations, suck as 2007’s NECROVILLE) will find plenty to love as long as they are able to get past the unfortunately generic title.

The plot follows budding paranormal exterminators Desmond & Jake as they attempt to combat the infestation of zombies (actually undead servants of an ancient demon) terrorizing new homeowner Allison (Marie Barker). While at first able to fend off the z-words with salt, they soon discover that the scourge goes much deeper — and is much more powerful — than expected. It’ll take crackerjack timing, an army of the undead and an ancient weapon in order to put these creatures away permanently.

Successful comedy takes quality acting, experienced editing and a script that is actually, y’know, funny! Here, director Torey Haas has obviously gone all out for his first feature, taking his extensive experience in short films and FX work and crafting a loving tribute to 1980s horror that maintains a breezy pace throughout its brief 80 minutes. Smartly, it generally treats the escalating threat seriously, slowly letting the action take over from the comedy as the plot progresses. While it’s always amusing, it makes for a satisfying experience, particularly after a main character experiences a violent — and surprising — mishap.

While most similar projects fall down in the acting department, some excellent casting helps bring our main trio to life. Greg Garrison is excellent as the smarmy Desmond, who has to (temporarily) abandon his flippant attitude in order to battle evil. Equally strong is Marie Barker, who manages to transcend the usual damsel-in-distress routine, even as she has to play the straight-man to Desmond and Jake’s buddy routine. D. Dylan Schettina plays the nerdy Jake a bit too monotone, but still provides a genuinely uptight counterpoint to Desmond’s dickishness. Best of all, the three are written with distinctive, different personalities. It’s so common for characters in microbudget productions to all end up speaking with the same voice, so it’s refreshing to see characters who seem to have some history from before the cameras started rolling.

But the polished nature of the film goes well beyond the acting. What most immediately jumps out are the visuals, which seem clearly influenced by the gel-assisted lighting of George Romero’s CREEPSHOW (with a dash of Dario Argento for good measure) and wonderfully complement both the zombies — which resemble voodoo style possessed corpses rather than Romero/Fulci style shuffling undead — and the Tim Burtonesque “Guy Smiley” demon with its glowing eyes and luminous grin. While some of the computer-generated effects in the later part of the film are a tad cheesy, the comic-book nature of the visuals help make these a bit easier to forgive.

Also impressive are the film’s few action sequences, in particular some well-choreographed sword fighting — which I’ve seen trip up much larger-budgeted productions. It could easily have looked like the characters were fighting in slow-motion, or were not really attempting to stab or slice each other, but the fights come off quite convincingly. This might seem like a fairly minor thing to praise, but I’ve seen dozens of horrible, unconvincing fight sequences in low-budget movies, so Haas and his team (including choreographer Alan J. Sanders) deserve kudos.

While initially reminiscent of recent paranormal comedies like JOHN DIES AT THE END, Torey Haas manages to transcend his horror movie (and video game) influences to give INVASION OF THE UNDEAD a style all its own. Packed with unique visuals and aided greatly by strong performances, I could easily see a string of sequels following these characters and their further adventures. Imaginative, fun and strongly recommended.

COLORFUL AND CHAOTIC. JUST THE WAY I LIKE IT. 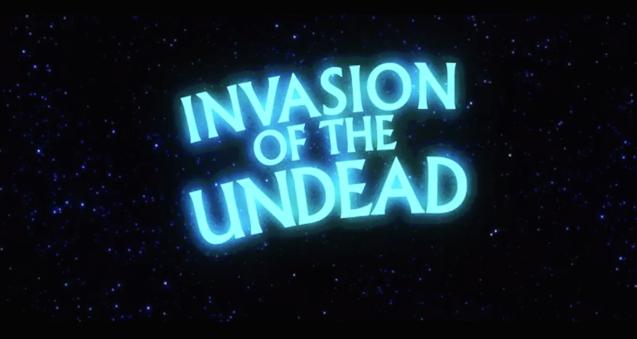