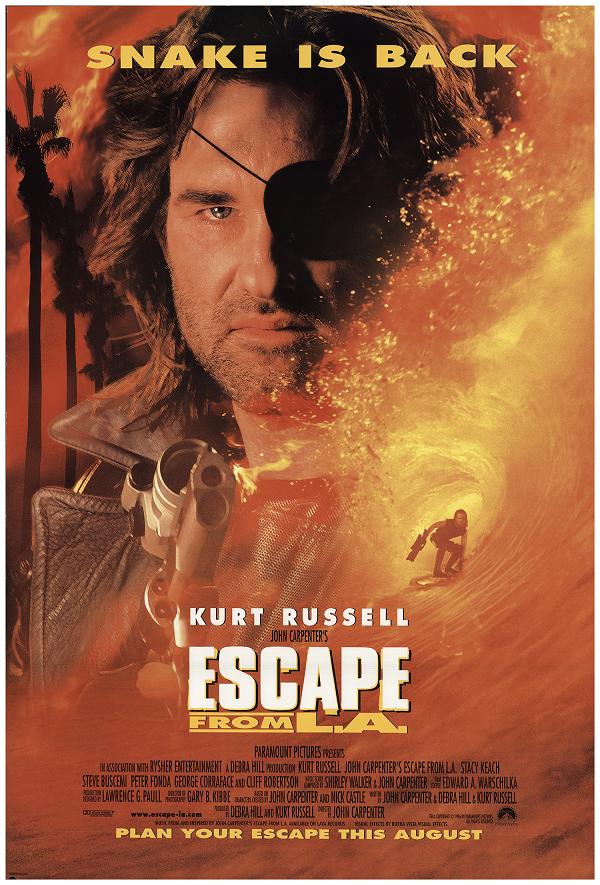 ESCAPE FROM L.A. is the punchline in John Carpenter’s career, and there’s all sorts of reasons for this. First and foremost, it’s not only the lone sequel he’s ever directed to one of his films (or any film at all), but it’s a sequel to one of his most beloved works. ESCAPE FROM NEW YORK, made in 1981 during the beginning of Carpenter’s directorial career, was a scrappy, low-budget, grindhouse-lite action/sc-fi romp that seemed like the first time Carpenter made a film that showed his true voice and passion as a filmmaker. Sure, by then, HALLOWEEN had come along and, after a few false negative first impressions, finally caught on with audiences and critics, making his career one to follow. That Carpenter hasn’t made a film that feels like HALLOWEEN since then shows that his worldview was a bit more audacious. His interest in earlier Western filmmakers like Howard Hawks and John Ford, and those particular films which saw a small motley band of gunfighters working together in isolated environments to fend off siege-like attacks from a larger, deadlier threat has been a major part in a dozen of his films. In a way, ESCAPE FROM NEW YORK is his thesis statement as a director, as it contains all his technical hallmarks, boasts all the different storytelling facets through which he would express himself during his entire career, and finally, stars his longtime actor collaborator, Kurt Russell.

While ESCAPE FROM L.A. is almost the antithesis to Carpenter as a director, which seems him applying a big studio, bullshit approach to the same story he was able to tell with better results at a tenth of the budget, it’s right on par with his tendency as a storyteller to skewer certain societal aspects, whether it be religion (PRINCE OF DARKNESS), pop culture (IN THE MOUTH OF MADNESS), or the unholy alliance between politics and the media (THEY LIVE). Though ESCAPE FROM L.A. isn’t interested in tackling such heavy topics, it’s still successful in its goal, which is to skewer the superficiality of Hollywood and the culture of the greater Los Angeles area while telling the kind of story that Carpenter likes to tell: a band of gunfighters up against impossible odds. Whether or not you consider ESCAPE FROM L.A. a failure of a film (most people do), there’s a certain romanticism of the film that can’t be denied, but that’s only if you take the film as just one small part in a long career of its three main collaborators: co-writer/director Carpenter, co-writer/co-producer/actor Russell, and co-writer/co-producer Debra Hill. All three (mostly) reprise their roles and responsibilities from ESCAPE FROM NEW YORK, only now they’re doing it after all having found success in the studio system, alongside its many pitfalls and trappings that can ruin the enthusiasm and idealism of young, budding filmmakers. Following his pre-classic release of THE THING, Carpenter learned the hard way how quickly a career trajectory can change once studios begin to view you as a wild card director who may not deliver a film to an audience that’s ready for it. Basically, ESCAPE FROM NEW YORK was a result of three collaborators making a movie with the enthusiasm and idealism of uncorrupted filmmakers. ESCAPE FROM L.A. was the same story retold with an organically accumulated hostility toward the very industry that took this thing they once loved and made it harder and harder for them to do it. Once Snake “agrees” to his latest search-and-rescue mission and is sent via underwater into the prison known as Los Angeles, one of the first images the audience sees is the appearance of a battered sign for Universal Studios and a great white shark trying to take a bite out of Plissken’s sub. It’s hard not to read between the lines at what Carpenter and co. are saying: Ever since JAWS brought about the advent of the big summer tentpole movie, working in the studio system has never been the same. 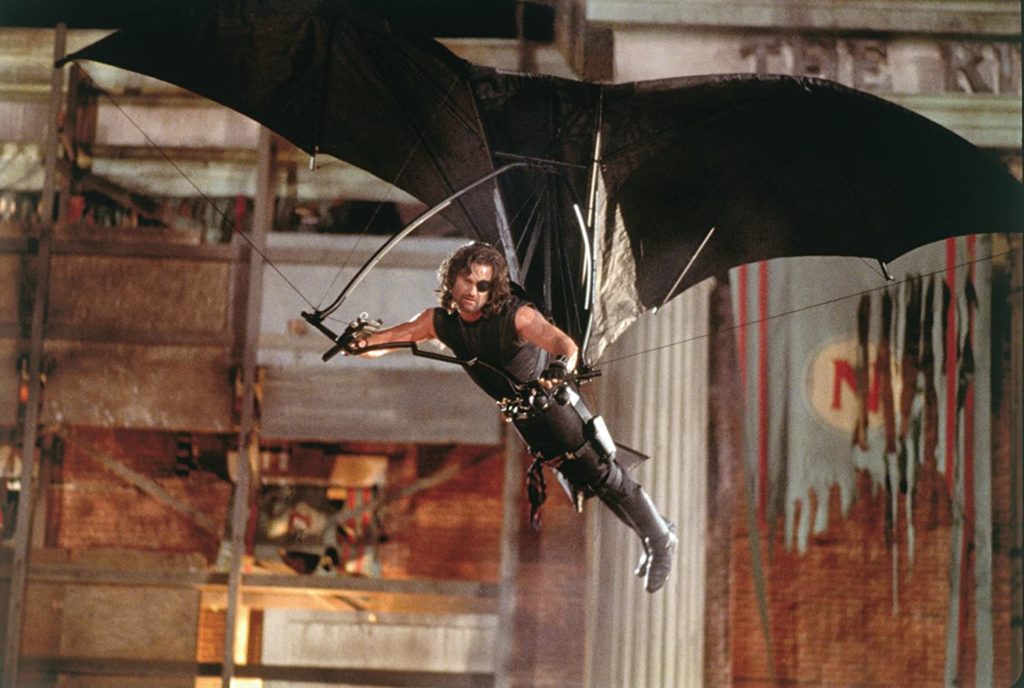 Of course, if you’re examining ESCAPE FROM L.A. as nothing more than a standalone movie without reference or knowledge of the people who made it, their relationships to each other, or their various endured hardships over the years, then yes, it’s a cartoonish, underwhelming, at times incoherent title that struggles to maintain that line between high-stakes sadistic action and audience-pleasing studio product. The visual effects are bad, the basketball sequence is worse (in spite of Russell’s purportedly genuine full-court basket shot), and most of the characters seem to be taking over for their counterparts from ESCAPE FROM NEW YORK (Steve Buscemi succeeds Ernest Borgnine, Valeria Golino succeeds Adrienne Barbeau and Season Hubley). It should come as no surprise that Kurt Russell’s as good as ever as the eye-patched antihero Snake Plissken, and his Clint Eastwood sneer hasn’t diminished in any way in the seventeen years between entries. The problem is the hero can’t be nearly as interesting if he’s not up against a viable foe, and unfortunately, Cuervo Jones (George Corraface) is the least interesting villain in Carpenter’s body of work, even when recognizing that very few of his villains were human. There’s nothing wrong with the actor’s performance; it’s just that the character is a pale shade of Isaac Hayes’ Duke from ESCAPE FROM NEW YORK, who didn’t need large, explosive scenes to embody his tough-guy swagger.

If Carpenter has ever been good at one thing, like the best science fiction writers, it’s been foretelling the future of society. THEY LIVE presented a future where people were mindlessly controlled by the media while living in squalor, accepting that it was all part of the plan. With Cliff Robertson’s unnamed role of The President, ESCAPE FROM L.A. easily foretold the arrival of Donald Trump in the highest office. While Carpenter’s version of the President was of a religious fundamentalist building walls to keep out a certain element, Trump is doing nearly the same, only his own narcissism won’t allow him to recognize a force out in the universe that’s greater than himself. That both the fictional and real president each have a daughter to whom the underrepresented populace of the United States were looking to for some kind of hope, it’s sadly ironic that only the fictional one had the wherewithal to stand up to her fascist father and reject his fundamentalist leadership. And, that Robertson very subtly quotes infamous nazi leader Joseph Goebbels in the film’s final moments is a stark reminder to the current reality we’re all being forced to share in which the real so-called president goes on national television and defends… Nazis. 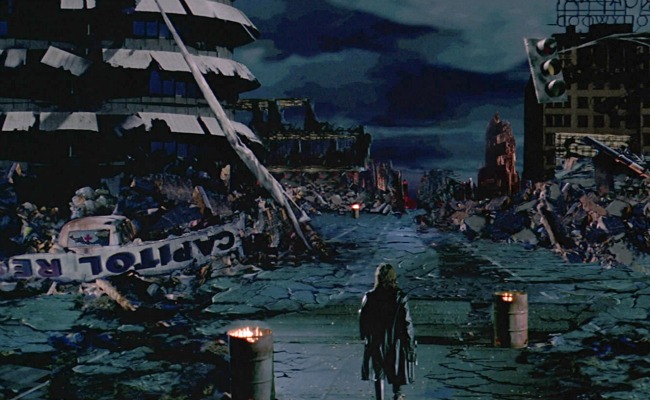 Since firmly getting involved in reissuing older films with cult appeal, Shout! Factory have become the unofficial home of Carpenter’s filmography, and ESCAPE FROM L.A. marks the distributor’s twelfth release of a Carpenter title. It’s also just one of very few that Carpenter declined involvement. Whether that be due to a scheduling thing, a not-wanting-to-get-out-of-bed thing, or perhaps it’s a title he wasn’t keen to revisit, we just don’t know, but his absence is felt in the otherwise okay collection of special features. Things kick off with an interview with the always lovely and humble Stacy Keach, who covers his collaborations with Carpenter in both this and BODY BAGS. Oddly, when asked what’s one memory he associates with making ESCAPE FROM L.A., it’s that a crew member recommended he get a hip replacement, which… he did. That follows up with an audio interview with Bruce Campbell to discuss the film’s most memorable character, the Surgeon General of Beverly Hills. Longtime Carpenter collaborator Peter Jason talks up almost all his Carpenter movie roles over the years, repeating some information he provided on Shout! Factory’s release of VILLAGE OF THE DAMNED. Capping off the actor portion is an interview with Cuervo Jones himself, George Corraface, who talks of his enthusiasm for the character, Carpenter, and how badly he wanted that role. It should be noted that this particular interview segment is pretty poorly presented, with glimpses of frames of the interview that weren’t successfully cut out during the editing process, along with an instance of an interview segment being pasted overtop a clip from the movie, leaving an outline of detectable motion around the frame. Further, all the film clips interspersed during the interview segments are choppily presented; whether this was an error during processing or a stylistic choice, it becomes somewhat hard on the eyes after a while. Thankfully, Shout’s new transfer of the flick is a noticeable improvement over Paramount’s previous release, looking pretty fantastic. 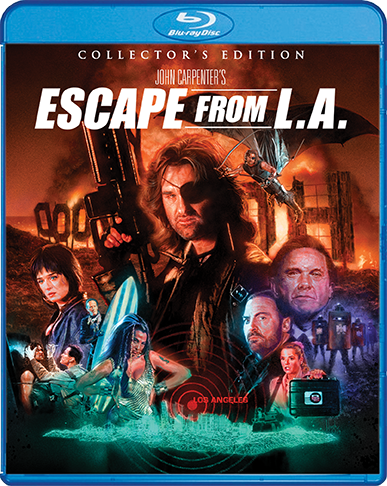 NEW Part of the Family – an interview with Peter Jason

NEW Miss A Shot, Get A Shot – an interview with George Corraface

As time goes on, and Carpenter teases us with film projects that are probably never going to become reality, his fans are forced to accept that he’s more content to be a producer and a rock star these days, and that’s fine. His body of work speaks volumes and he’s already inspired the next generation of filmmakers who aren’t ashamed to admit it. While I’d love to see him and Kurt Russell collaborate on the long-mooted ESCAPE FROM EARTH (seems like a good way to work climate change into the mix, since Planet Earth seems pretty well fucked anyway), both of them have already gone on record as saying they’re simply too old to entertain such a notion. Though it’s natural to take a filmmaker’s body of work and war its films against each other, I’ll always be grateful for every film bearing the name of John Carpenter, Director — even the so-called duds like this one.