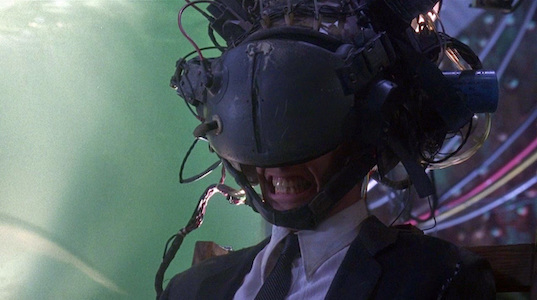 The future ain’t what it used to be. But then again, it never was. Films that take place in the not-too-distant future are always more telling about the present than they are of being true forecasts of what’s to come. JOHNNY MNEMONIC’s 2021 is a cyberpunk world ripped apart by corporations, mercenaries, disease, and massive socioeconomic disparity — with only some of those elements being far off from the current trajectory.

Based on William Gibson’s 1981 short story of the same name, JOHNNY MNEMONIC was presumably never meant as a predictor, but it remains an interesting reflection of the eras that spawned it (first the ‘70s/‘80s, and then the ‘90s) — highlighting then impossible technology side-by-side with constant morality (or lack thereof) found in society. JOHNNY MNEMONIC was released 25 years ago today, but its time may finally be coming to pass. 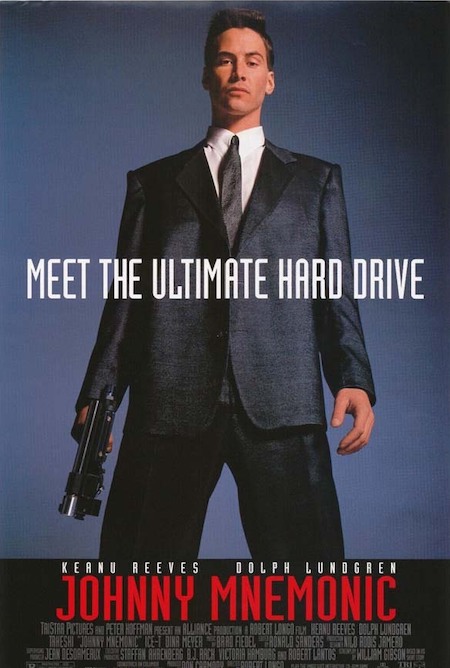 Since its “inception” — that is to say, multiple artists and works with similar aesthetics and elements emerging from various parts of the world at the same time — in the early ‘80s, cyberpunk has mostly been on the fringes of culture. Born from works of writers like Gibson (who also wrote JOHNNY MNEMONIC’s screenplay), Bruce Sterling, and Neal Stephenson, it would influence music, video games, TV, fashion, and films with its focus on advanced technology, stark striation of classes, a strong Japanese influence on society, rampant crime, and massive corporations operating above the law.

There have been breakthroughs into mainstream pop culture with works like GHOST IN THE SHELL, Serial Experiments Lain, THE MATRIX series, and more — but mostly it has been a large subculture that influenced design and attitude but didn’t totally make the crossover into widespread acceptance.

1995 also saw the release of THE NET, which was set in present day and had a “hacker” using the Internet to get information and even order a pizza — concepts which were rapidly approaching into becoming norms and realities, but still seemed a bit science fiction-y.

So a movie in which electronic databases are accessible from across different points in the globe, along with electronic containment of vital information, transhumanism and body modifications were on the rise, and virtual reality allowed people to navigate this data was way beyond what many were ready for—even if it wasn’t that far out from where reality would be in a couple of years. 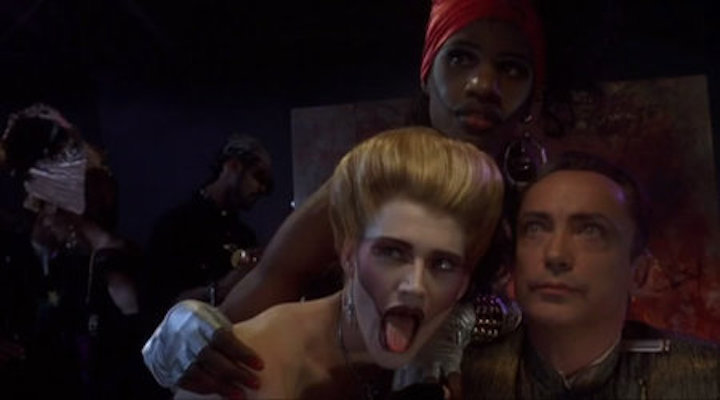 But of course, JOHNNY MNEMONIC wasn’t interested in prognostication as much as telling an interesting story with colorful characters — even if its story is pretty familiar.

Bourgeoisie boy Johnny (Keanu Reeves) is a mnemonic courier who uploads information into his brain and travels with the sensitive data that can’t be sent across the world wide web to physically deliver it to recipients. In order to ensure he has the mental bandwidth to contain this information, Johnny has to constantly dump out his own memories to make room for the new files. In order to continue to afford a decadent lifestyle of room service, prostitutes, sushi, and nice suits, Johnny has to trade in his humanity to become a service. It’s not subtle stuff, but it works.

JOHNNY MNEMONIC’s world is full of wires and webs that make everything more connected than ever before, yet is seemingly dehumanizing those within it. Not only is there the rampant new disease, nerve attenuation syndrome (NAS), ravaging the populace that may be connected to the promulgation of electronics and the Internet, but there is also an ongoing war amidst various corporate factions, the Yakuza, and economic classes, who all seem to regard life as cheap in their pursuits of dominance. 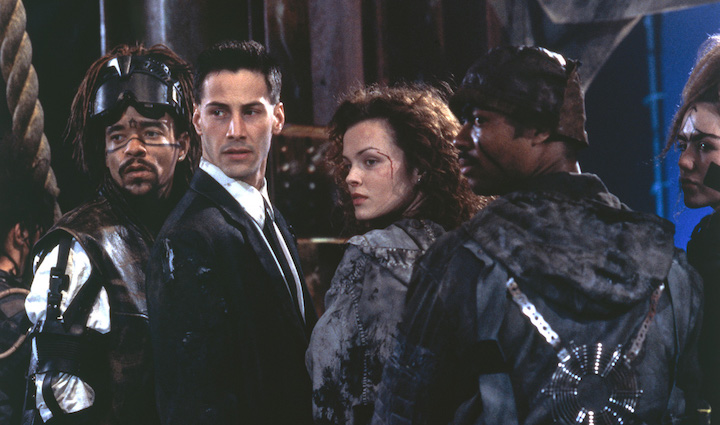 When Johnny gets a very important package uploaded into his brain (which is far too big for his mind to contain, but he lied in order to get the big payday), he is soon followed by mercenaries who are all hellbent on decapitating the courier in order to get the data for themselves. He turns to a bodyguard (Dina Meyer), a black market doctor (Henry Rollins), an unscrupulous middleman (Udo Kier), and eventually a cyborg dolphin to help him find his way out of the situation. JOHNNY MNEMONIC may take place in a bleak cybernetic dystopia, but it’s a tale from film noir, pulp detective stories, and classic Hollywood dramas like CASABLANCA. 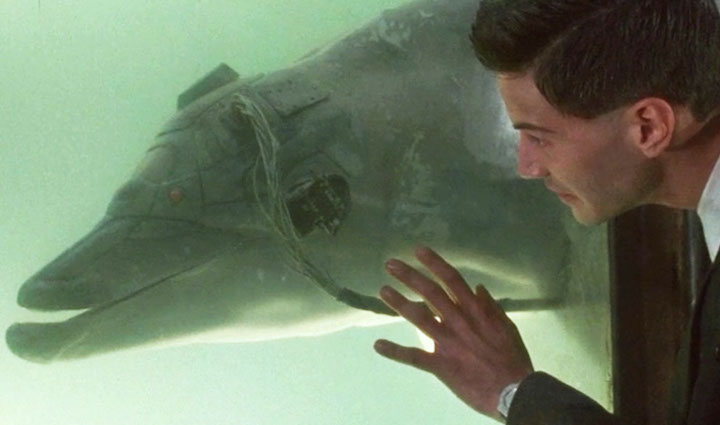 If you were to simply list out all of the elements, scenes, and creatives involved in JOHNNY MNEMONIC, it would sound amazing and too crazy to pass up. In addition to the aforementioned actors, there is also Dolph Lundgren as a Jesus freak cybernetic assassin, Takeshi Kitano as a Yakuza boss/ Corporate heavy (who works a puppet in one scene), Ice-T as a comrade-in-arms to that dolphin, in a film directed by first-time filmmaker Robert Longo — an artist who prior to JOHNNY MNEMONIC was mostly known for his paintings and installations, but also music videos for R.E.M., Megadeath, and New Order, along with one episode of Tales From The Crypt (season four’s “This’ll Kill Ya”).

Unfortunately, the experience isn’t as cool as all of these factors make it sound. Johnny and his badass cybernetically enhanced bodyguard, Jane (Meyer), spend most of the time fighting in the (already tired by 1995) trope of “people that don’t get along until they do and have feelings for each other.” Johnny himself is mostly a passive element of the film, being herded from one place to the next, whining about his predicament. 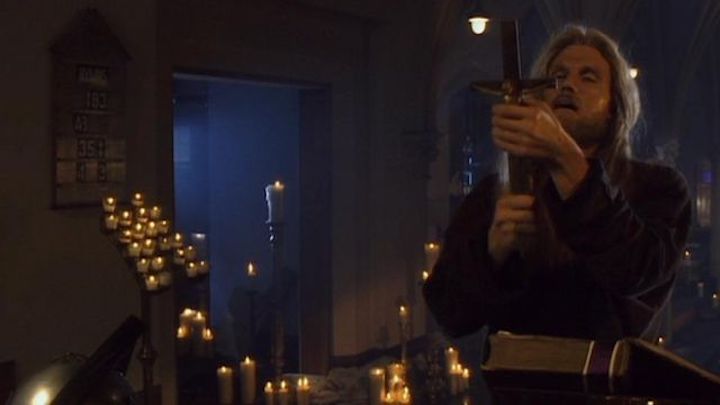 The antagonists are interesting, but there are so many with so many stops in the journey in JOHNNY MNEMONIC’s brief 96-minute runtime that there isn’t much room for depth. And when there IS further characterizations, it becomes a very muddled story of corporate intrigue and trying to deliver a cure for NAS, and other motivations that are either fairly confusing or never really explored. 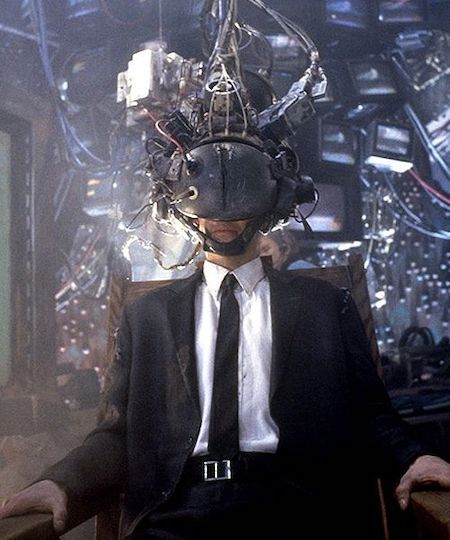 Still, JOHNNY MNEMONIC is incredibly memorable when not taken as a whole. A lot of the imagery is really cool and feels like Shin’ya Tsukamoto filtered through Hollywood gloss. There are cool kill scenes, bizarre line readings, unexpected narrative twists, and some fun action scenes — all of which seem to presage Reeves’ involvement in THE MATRIX franchise.

JOHNNY MNEMONIC is also interesting because of elements around it. First, there was a different, longer cut of the film for Japan that has rarely been seen outside of that country that became a thing of legend in the early days of the web. When the movie landed on VHS, it was in this DayGlo orange tape that truly set it apart from the others and would firmly position it in the minds of viewers of that time. 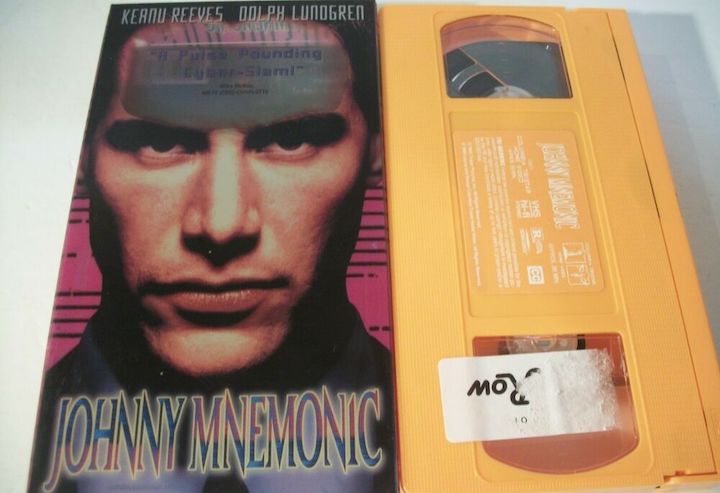 Gibson’s story turned cinematic adventure would also find further life in an unexpected place—the world of pinball gaming. JOHNNY MNEMONIC is one of the more popular and renown pinball games (maybe because the film was an infamous flop or has so many odd elements involved?) created and is often discussed in the community boards for that past time. 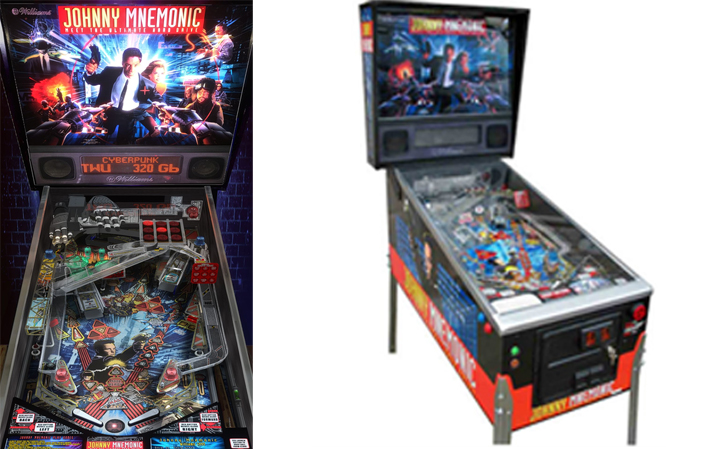 Cyberpunk never completely pierced the popular conscious of the mainstream, but was highly influential for years on its outskirts. While JOHNNY MNEMONIC, the first full-fledged film based on one of its earliest writings, was a flop, the title lives on due to its idiosyncrasies and glancing connections to the future it foretold. But now it seems that the genre/aesthetic is becoming more popular than ever before, perhaps in a retro-futuristic/nostalgic element mixed in as those raised on the ‘80s and ‘90s media of cyberpunk are now producing their own materials. There’s the Netflix show Altered Carbon, the upcoming video game Cyberpunk 2077 (also featuring… Keanu Reeves), and the works of artists like Deathburger, João Antunes, Jr., and Lordess Foudre.

The future ain’t what it used to be, but perhaps JOHNNY MNEMONIC is suggesting — it never was? 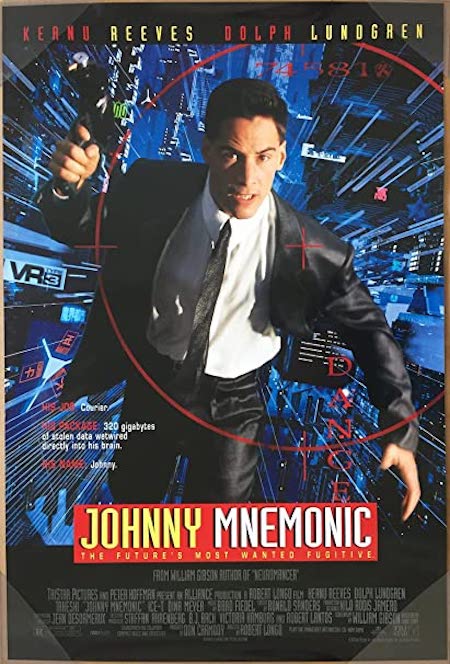