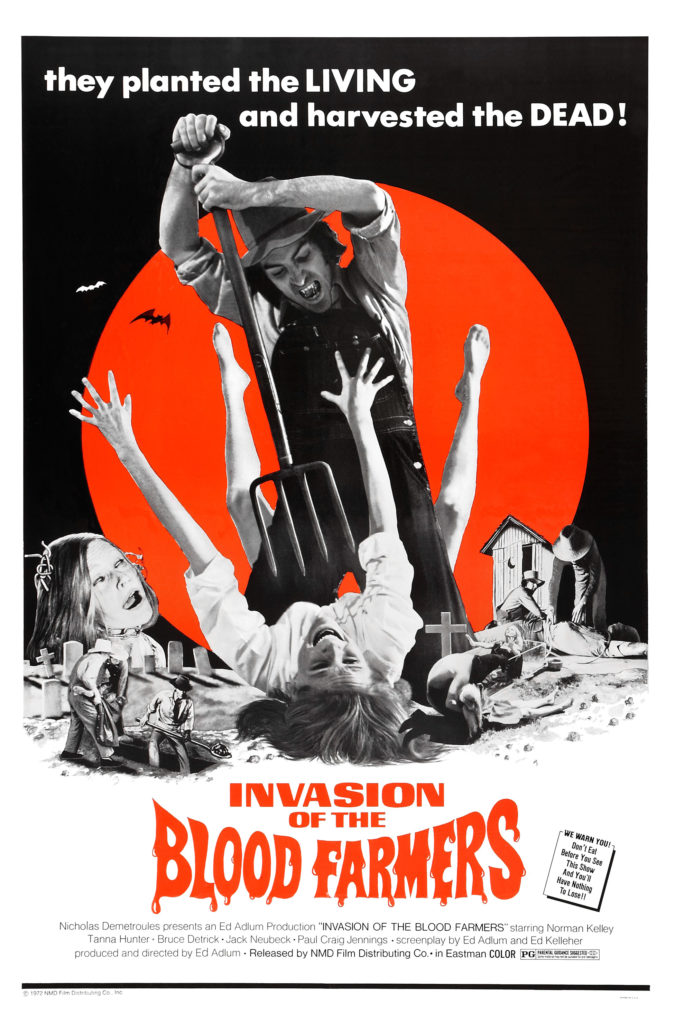 Long ago, demons roamed the world harvesting human beings in order to make blood sacrifices to their demon queen. Apparently that’s still going on today (or, the today of 1972), because a very bloodied man (hilariously named Jim Carrey) stumbles down the road and heads toward a bar filled with good-old-boys cracking jokes about people we don’t know. The bartender asks someone if his wife has turned up yet (cuz she’s missing), but the very unworried husband waves away the bartender’s concern. Jim Carrey bleeds into the bar and wags his tongue around before collapsing into a weird heap. The good old boys, not knowing what to do, make appropriate “yucky!” faces. What they don’t realize is that this is just the beginning of the terror, and that Jim Carrey will be the first of many victims INVASION OF THE BLOOD FARMERS will introduce, along with our team of plucky good guys who will combat the silly looking demon farmers. The good guy leader? Dr. Roy Anderson, pathologist, and the greatest cinematic creation since hyperbole.

INVASION OF THE BLOOD FARMERS happened because of director Ed Adlum, who knows a thing or two about B-movie horror, having also produced the befuddling SHRIEK OF THE MUTILATED a.k.a. SCREAM OF THE SNOWBEAST. In the multi-tiered world of garbage cinema, INVASION OF THE BLOOD FARMERS sits among the more obscure. Only the truly dedicated garbage classic aficionado knows it exists, let alone has seen it, but if you’ve never tangled with these blood farmers before, and you don’t think your worn copy of PIECES or TROLL 2 can handle another spin, this here is one title you’ll want the suck the blood from, awkwardly, for whole minutes at a time. 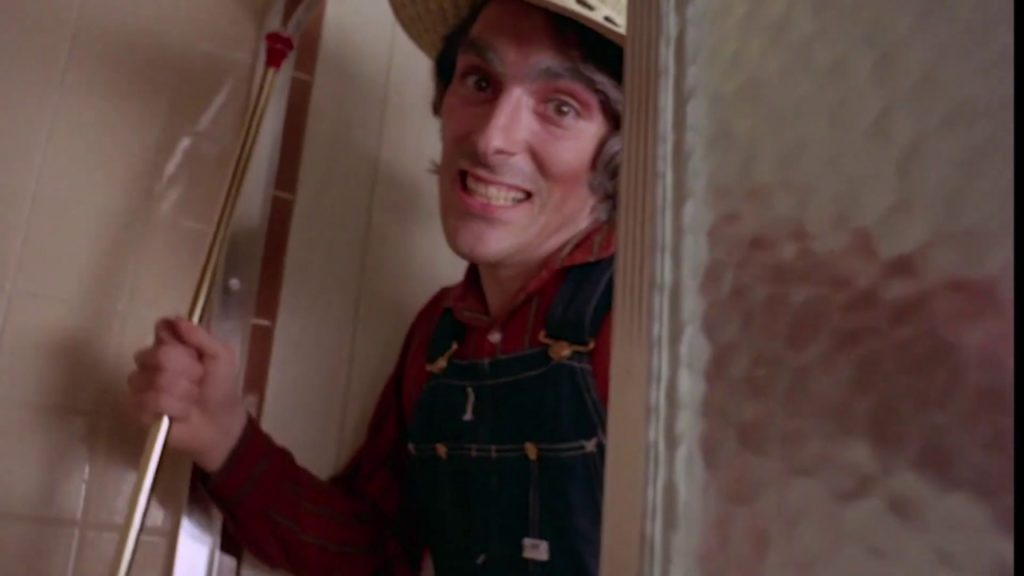 What makes INVASION OF THE BLOOD FARMERS such a profound garbage classic is its sheer incompetence, and the fact that nothing works. Not a single component of the film is passable. It’s all as incorrectly done as can be. Heads are cropped out of shots, continuity is out the window, and if there’s a reflective surface on screen, you can bet the entire crew is in it. Even the very idea of the film – farmers siphoning blood from their victims to offer it up to their demon queen – is silly on paper, sillier out loud, and silliest when you’re actually watching it. And it’s a gorgeous thing to behold. INVASION OF THE BLOOD FARMERS is the kind of film where two actors will share the same screen at once – one actor who can barely get through his lines without looking like he wants to hit snooze for another nine minutes, and another actor who joyously, bombastically, energetically wants to be exactly where he is. That latter actor? His name is Norman Kelley, and he’s incredible.

Above all of the flick’s nutsery, it’s Kelley’s undiluted, dynamic, overly enthusiastic performance that really makes things special, and anything that involves Norman Kelley talking is when INVASION OF THE BLOOD FARMERS comes totally to life. The excitable theater actor plays pathologist Dr. Roy Anderson with unmatched enthusiasm, shouting and specifically enunciating every single word of his dialogue for the ultimate delivery. That INVASION OF THE BLOOD FARMERS includes redneck demons harvesting blood with rubber tubes and clumsily killing a lot of people, but that the best part involves Dr. Roy Anderson bursting into a room and bellowing, doesn’t so much diminish the overall enjoyment of the film as it does heighten the sheer delight in seeing Norman Kelley in action. Anything Kelley says is incredible (anything), but I especially like any scene in particular which sees Dr. Anderson taking his time and severely concentrating on reciting long, scientific diatribes, ignoring his flubs and continuing on. It’s almost like he was told beforehand, “You have one take, so don’t blow it, but if you do blow it, keep going.” I can’t emphasize enough how much joy you’ll experience watching Dr. Roy Anderson preach about scientific things, really excited to be in a feature film! 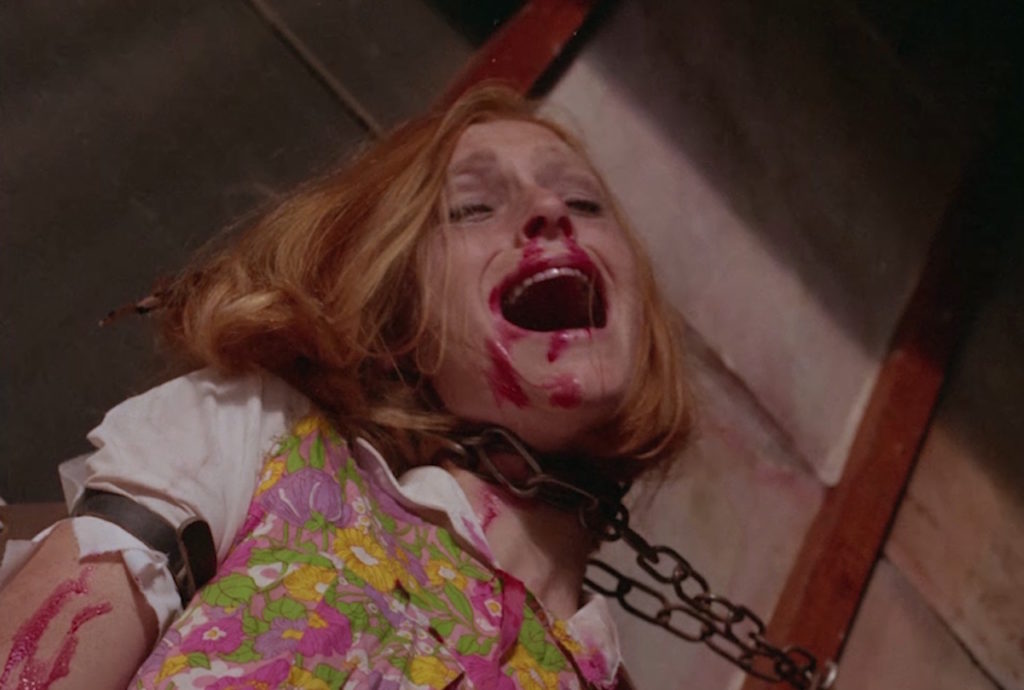 If Internet is to be believed, INVASION OF THE BLOOD FARMERS was shot for $24,000 and has never made back its money. And when you make a movie for $24,000, it’s fated to include scenes of actors staring directly into the camera waiting for the director to call cut, or to offer blood-farming demons who have existed for thousands of years but who are still completely mystified by the telephone, or to capture a rare and early on-screen effort by Jim Carrey*.

Severin have also included a tidy amount of special features for this release (although the previous commentary recorded for Retromedia’s DVD release hasn’t been ported over). Instead, we’ve got a new audio commentary with director Ed Adlum and actress Ortrum Tippel, moderated by author Kier-La Janisse; and three featurettes: “Nothing You’d Show Your Mom,” an overview of Edlum’s career, which is very unexpectedly melancholy; “Harvesting the Dead,” an interview with actor Jack Neubeck, who seems amused and a little proud of his involvement with the movie; and “Painful Memories,” an interview with director of photography Frederick Elmes (who’s not wearing rose-colored glasses for this one). 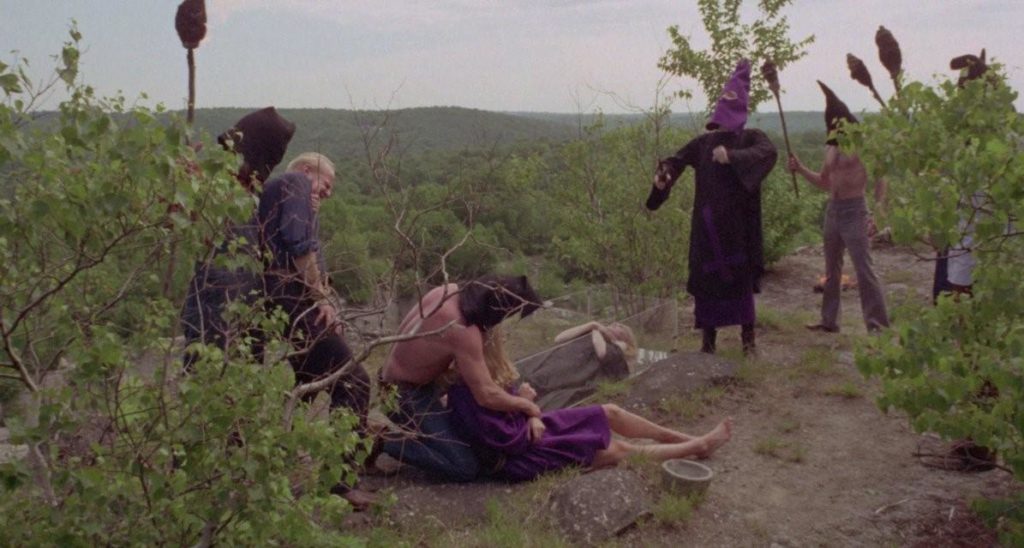 I’m so glad INVASION OF THE BLOOD FARMERS is back. I’m so glad we live in an age, even when physical media is struggling for relevance, that those offbeat titles you used to dismiss as never making it past standard definition are being resurrected in high-def. Folks like Severin doing just that, rescuing some of our weirdest, most beloved video store titles and giving them a new lease on life.