When I first reviewed LOWLIFE back when I saw it at Cinepocalypse 2017, I really did not say much other than how much I enjoyed it. That very short, non-descript review was born of both the time crunch that comes with trying to keep up with reviews in the heat of a film festival and the fact that I did not want to spoil any of the very surprising left turns the plot of the film took. With a little extra time to write a proper review for the film’s Blu-ray release and the fact that several other critics have celebrated it as one of the best films of the year, I feel a little more leeway about diving into some of the particulars of the plot. But I will do my best to avoid any major spoilers for those folks reading this who have not seen it, because it is truly one of the most entertaining, visceral, and satisfying films I’ve seen in a long while and it is best experienced by watching it with as little information as possible.

While the plot of LOWLIFE does spin out in increasingly larger circles, drawing in new major characters with each segment, it really boils down to a kidnapping gone wrong scheme that is complicated by the emotional connections of many of those involved. That said, co-writer/director Ryan Prows does throw down the gauntlet with a truly upsetting first two scenes that introduce scumbag extraordinaire Teddy (Mark Burnham) and his weasely henchman ICE Agent Fowler (Jose Rosete). The first scene finds Fowler kicking down a motel door and cuffing a family of five undocumented Mexican immigrants while he threatens Crystal (Nicki Micheaux), the African-American manager of the motel. If that moment is not sufficiently loaded for you, Teddy then proceeds to murder and dissect—in graphic, bloody detail—one of the immigrants to harvest her organs to sell on the black market. Thankfully, the film does go less overtly dark from this gut punch of an opening.

The film is structured in a nonlinear way so that the plot plays out as various “lowlifes” get swept up into Teddy’s evil schemes and find their humanity in the process. The central premise of the film is that the main characters found in it are the characters that would have maybe one line before disappearing to do the bidding of the villain in mainstream films. Here, they are classically flawed heroes and villains, struggling to do the right thing and save a pregnant kidnapping victim from a depraved murderer/kidnapper/pimp/organ harvester. Oh, and did I forget to mention that LOWLIFE is largely a character comedy?

It takes guts to not only include a character with a swastika tattooed on his face, but to then send that character on an arc where the audience not only learns to like him, but root for him as he finds bloody redemption in the surprising and violent final act. But that is the type of movie that LOWLIFE is. After a while you no longer notice that a character has a swastika tattoo on his face or that another character spends the entire film in a luchador mask, because they are so well-drawn and performed.

I have seen a lot of talk about LOWLIFE being a successor to PULP FICTION because it is a crime film told in a fractured timeline. That is an unfair comparison to hang on any film, let alone a low-budget indie from a first time feature director. But Prows and his team of four co-writers do manage to hit that same sort of tricky Tarantino-like balance of taking the violent actions and emotional arcs of their characters seriously at the same time that the pulpy plot goes to increasingly absurd places. I don’t think the filmmakers intended LOWLIFE to be some sort of homage to Tarantino because despite the similarity in tone, the characters here are far more desperate and—for the most part—very conflicted as they try to do the right thing (and thankfully don’t engage in five minute conversations about pop culture).

There is also something far more absurd about the world that these characters inhabit than you get in other low-budget crime films. While recognizably set in Los Angeles, there is something slightly askew about the environment with massive basements tucked under small restaurants, a garden shed converted to an altar, and an otherwise normal looking house covered in wallpaper that I can only describe as “faux Liberace.” Placing such outlandish characters as El Monstruo (Ricardo Adam Zarate) and Teddy (whose villainy is somehow not undercut by his cartoonish appearance and the fact that he drives a Miata) into these otherworldly locations actually grounds them even more than the excellent performances by Zarate and Burnham.

LOWLIFE really feels like a miracle of a film. A low-budget indie crime flick should not look as good as this does, but Prows and cinematographer Benjamin Kitchens get huge production value out of shooting on location and repeating stylish shots like those that accompany El Monstruo when he has one of his rage blackouts. The film also overachieves as a multiple character study, wringing honest pain and regret out of characters that would have remained cartoons in lesser films. I hate to sound like I am parroting other critics, but it truly is one of the best films of the year.

Aside from the very clean image and sound, the highlight of this excellent Blu-ray are a pair of commentaries. The first one features Prows paired with co-writers Tim Cairo, Shaye Ogbonna, and Jake Gibson as they break down how the script was pulled together from various ideas they had used in their own short films, skits, and web series that they had made in film school. The second commentary finds Prows teamed with Kitchens as they talk about the difficulty of constantly having to change locations after losing all of their first choices and give tons of credit to production designer Callie Andreadis for the work she did turning one backyard into three different locations and creating El Monstruo’s weirdly decorated home. 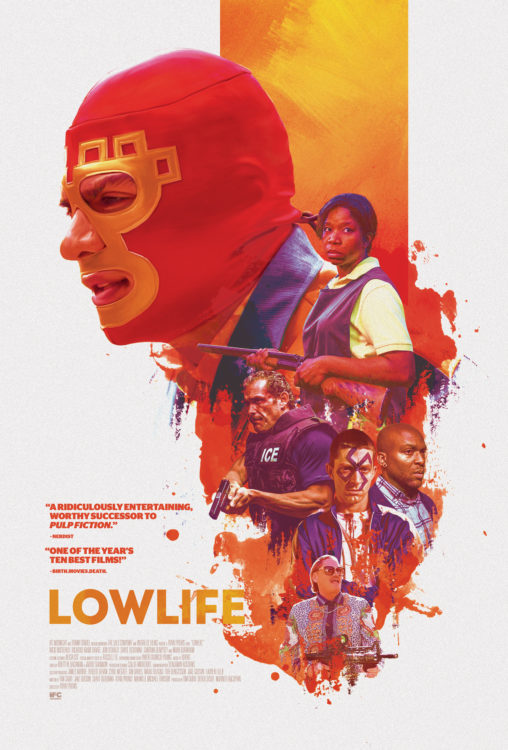