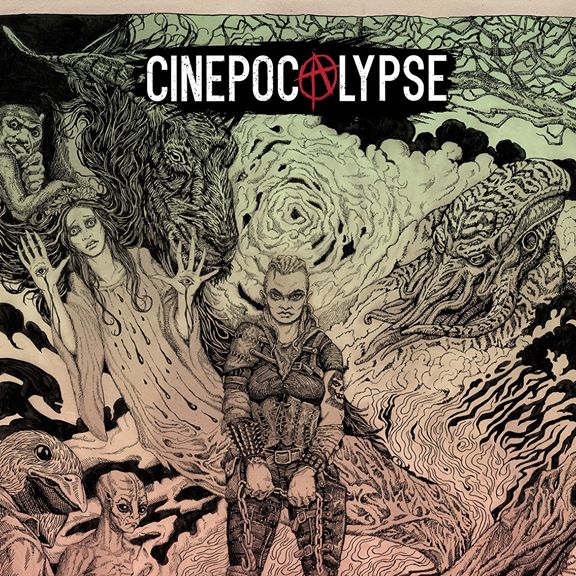 2019 marks the third annual Cinepocalypse Genre Film Festival in Chicago, Illinois, held once again at the Music Box Theatre. Growing out of the successful Bruce Campbell Horror Film Festival previously held at Rosemont (and attached to the Wizard World convention), Cinepocalypse’s ambitions have never been modest — they came out of the gate with a full week of programming, and while they have made some other tweaks to their format they have kept the marathon length. This year’s festival includes a number of world premieres and numerous Midwest premieres, as well as some wild repertory screenings and an evening with Joe Bob Briggs. I previously covered the first half of the fest for Daily Grindhouse here, and now we’re wrapping things up with some other highlights.

So much has been written already about the opening night world premiere of Glenn Danzig’s VEROTIKA (DG’s own Pat O’Sullivan covered the film previously) that there really isn’t much to add. However, it is worth reiterating that this was truly a once-in-a-lifetime experience. For its myriad flaws VEROTIKA is unquestionably the movie Danzig wanted to make, its images and (honestly great) soundtrack seemingly poured directly onto the screen from his brain. Or, more accurately, from the panels of his comic books. Through all the film’s weird rhythms and lingering fades, it seems like Danzig used the books not just as storyboards but adapted it directly as it appeared on the page. Characters are displaced in space and position from one shot to the next in ways that make no sense to the viewer in moving pictures, but that’s how it works in comics. Jumps in time and space between panels are inherent in that medium, but translating that directly to the screen results in pure Outsider Cinema. It’s extremely rare to see such an undiluted vision on the big screen, and regardless of what one takes away from the film itself that is an experience to be treasured. 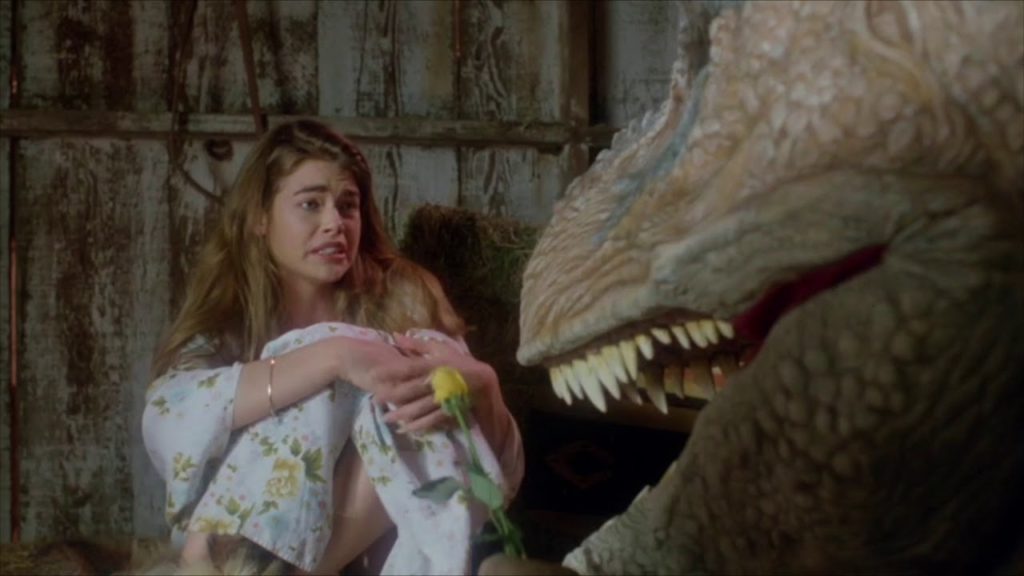 It’s probably not much of an exaggeration to say TAMMY AND THE T-REX was the one film for which everyone attending Cinepocalypse was the most excited. How else could any reasonable cinephile react to the news that a (the?) 35mm print of a film originally released in the ’90s in a somewhat more family-friendly version was playing in its original R-rated cut — oh, and the movie was from Stewart Rafill, the director of MAC AND ME, which famously had a horrific alternate ending of its own? Anticipation was running high, and the Music Box Theatre’s main auditorium was packed. So it’s a good thing that the film absolutely delivered on the outrageous promise of its concept: Paul Walker plays Michael, a popular kid who wants to date Tammy (Tanny?), played by Denise Richards in her feature-film debut. Her violent criminal ex-boyfriend and his gang retaliate by literally feeding Michael to a lion. As luck would have it, mad scientist Dr. Wachenstein (Terry Kiser of WEEKEND AT BERNIE’S) needs a fresh brain for his robot T-Rex experiment. Soon the robotic dinosaur is tearing its way through the gang while Tammy (Tanny?) and her best friend and flamboyant gay stereotype Byron (Theo Forsett, channeling Meschach Taylor’s Hollywood Montrose from the MANNEQUIN films — the second, by the way, also directed by Rafill) try to figure out how to get Michael’s brain back into a human body. The resulting hijinks are truly outrageous, resulting in one absolutely wild time at the movies. It was announced that this was likely the only public screening of this 35mm print, but that a Blu-ray release was in the works. Anyone interested in such things should keep an eye out and pencil in a viewing party as soon as humanly possible. 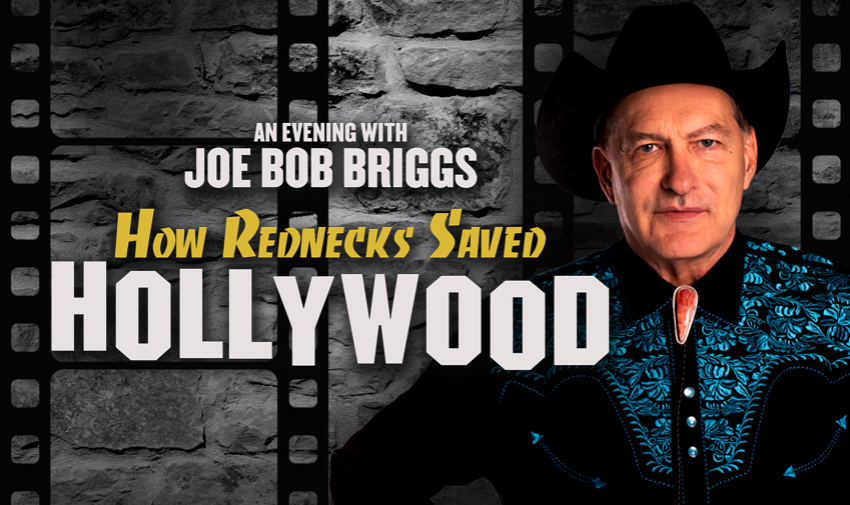 One would imagine that Joe Bob Briggs needs no introduction to anyone reading Daily Grindhouse. The man is a legend in cult/exploitation film history, helping rear generations of paracinephiles with his observations on a vast number of weird genre movies as a sort of “horror host” with a more educational bent. Briggs has had a huge comeback recently thanks to his wildly successful series THE LAST DRIVE-IN on Shudder, and he’s also been doing appearances where he presents a (fun, engaging, extremely entertaining) lecture on the history of not just redneck cinema but the concept of the redneck itself. Anyone who has watched Briggs in any of his television shows has a pretty good idea of what to expect, but it’s still flat-out amazing how this man makes two-and-a-half hours of dense information pass in a snap. Briggs traces the origins of the terms “redneck” and “hillbilly” to their roots and follows them to the southern part of what would eventually become the United States, where everything gets named Cumberland and a full-on rebellion breaks out over government taxation of whiskey well over a hundred years before the first moving picture even enters the scene. Once there, though, Briggs moves through hixploitation film history at a breakneck pace while somehow seeming to cover literally everything — from Kroger Babb’s notorious CHILD BRIDE to Ma & Pa Kettle, countless “moonshine” movies, all the way up to SMOKEY AND THE BANDIT and everything in between. Briggs presents these films in an overarching context in both in relation to each other and the culture at large, while also sneaking in some delightful asides such as taking local Chicago distillery Koval to task for a particularly flowery description of their bourbon. Anyone who has any interest in redneck/hillbilly movies, cult/exploitation film in general, and/or Joe Bob Briggs himself should make it a point to catch this presentation if he comes anywhere near their town. 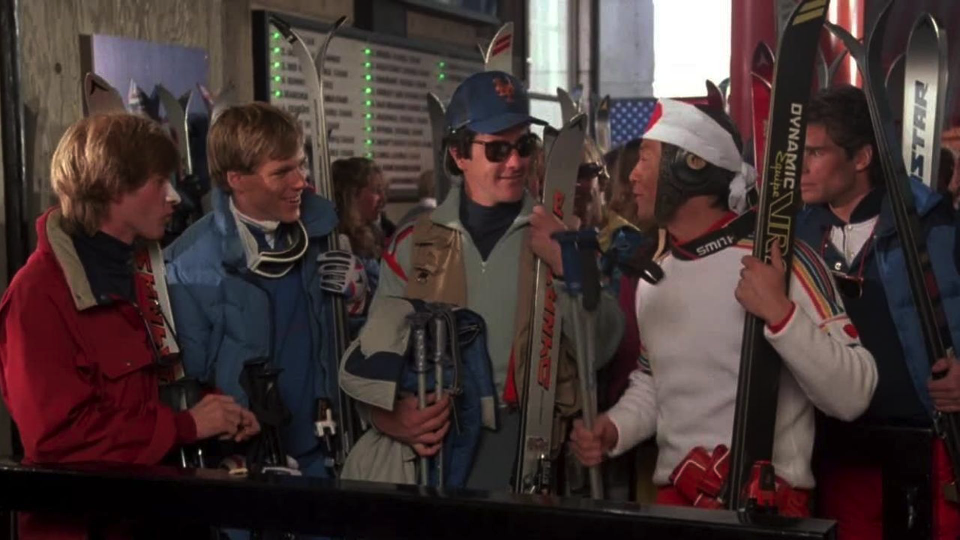 As absurd as it may seem that Synapse Films followed up their incredible restoration of Dario Argento’s SUSPIRIA (itself the latest in a long line of Argento restoration projects) with a 4K restoration of 1980s sex comedy/sports movie hybrid HOT DOG… THE MOVIE, ultimately it kind of makes sense. After spending all that time with nightmarish, gruesome horrors, who wouldn’t want to take a little break with some dumb fun? The results are unsurprisingly great, mostly thanks to the fact that for a stupid sex comedy HOT DOG features some seriously impressive competetive skiing footage along with all the beer, pranks, and Shannon Tweed anyone could ever want. It’s unlikely to win any new fans who weren’t convinced by previous releases of the movie, but for anyone who is already attuned to its charms this 4K upgrade will be well worth a double-dip when it hits home video. As an extra treat for Cinepocalypse, the film was preceded by a presentation by Mike McPadden, author of HEAVY METAL MOVIES and the new book TEEN MOVIE HELL (and occasional Daily Grindhouse contributor), ably assisted by Katie Rife of The AV Club. McPadden covered the history of ski movies from Abbot & Costello to HOT TUB TIME MACHINE, with a number of hilarious visual aids in a slide show for the ages. They were so much fun that the crowd probably would have been happy to listen to them talk about ski movies and sex comedies for a lot longer than they did, but film festival scheduling demands its sacrifices. It was still a hell of a good time, and a nice break from the more serious and grim genre programming that made up most of the fest. 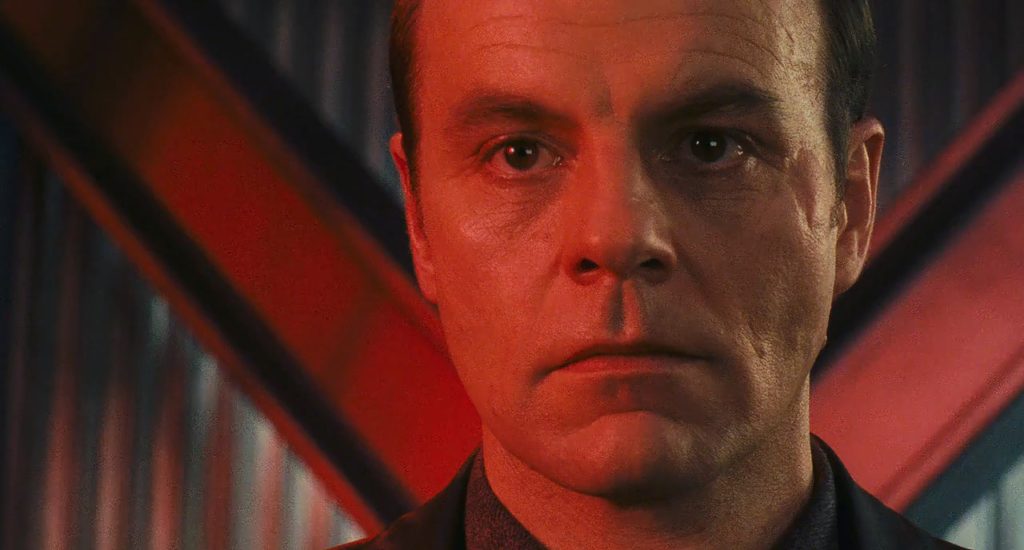 What is there left to say about TOTAL RECALL? It’s fantastic — big, loud, ridiculous, Hollywood-era Verhoeven at his most crowd-pleasing and playful. It was great to see a film print of the movie in a sold-out house, of course, but the real treat was Michael Ironside’s post-film discussion. He took the mic and immediately launched into a beautiful, fascinating discussion of not just this film but his entire career. This went well beyond “It was great working with (x)”; there was that, certainly, but Ironside also told some very funny and deeply personal and poignant stories as well. The crowd was no doubt excited just to hear the man talk, but hearing him get choked up remembering people who had worked on TOTAL RECALL who had since passed and becoming emotional just reflecting on his incredible fortune at having been able to do this job he loves so much for so long was amazing. He has such a commanding presence that there really was no official Cinepocalypse Q&A, he just got up and started talking and eventually hit a point where he himself asked the audience if they had any questions. Audience Q&A is always a dicey proposition, but Ironside handled it with exactly the kind of grace and intelligence one would have expected from his talk leading up to it. Once again, the movie was almost an afterthought in this experience. If we could have all just listened to Michael Ironside talk about his phenomenal career for a few hours, we would have been more than happy with how we spent that time. As much fun as it was to see new movies, this year’s Cinepocalypse was really defined by its guests and their special presentations. Here’s hoping they build on that more next year and truly build the event into more than a big genre film fest but a celebration of the people and films who have made such an impact on us all.