Early in STRANGE DAYS, a minor character pulls a gun on slimy but charismatic black-marketer Lenny Nero (Ralph Fiennes) to quickly settle an argument. “Two million years of human evolution, and that’s the best idea you can come up with?” Nero asks. Considering the film’s overly convoluted plot tinged with neo-noir and heavy doses of paranoia about the upcoming millennium is wrapped up with two men engaged in a gun and knife fight, a couple of psychotic dirty cops shooting innocent bystanders, and a truly good person getting beaten down with police batons, director Kathryn Bigelow and screenwriters James Cameron and Jay Cocks provide a blunt, dispirited answer: no, we can’t come up with a better idea. Welcome to the end of 1999 as seen from the mid-’90s.

A messy collision of filmmakers with strong voices, talented actors that the studio system couldn’t figure out what to do with, and a simultaneous embrace and rejection of big budget, high-concept action/sci-fi plotting, STRANGE DAYS is an utter mess of a movie. But it is a fascinating mess with big ideas bubbling under its cynical, yet slick surface.

Despite a decent critical response and Cameron’s clout as co-writer and producer, it’s no wonder distributor 20th Century Fox lost faith in it, allowing it to tank at the box office. To be fair to the studio, it’s a movie that does feel a little dangerous. From the perspective of 2019 rolling into 2020, that dangerous edge is what allows STRANGE DAYS to hold up well in its vision of a human race unable to evolve as fast as the technology that it produces.

The film starts on December 30, 1999 and follows Lenny as he buys and sells memories recorded in first person POV by people using recording devices they wear on the tops of their heads. These memories can range from custom made (not surprisingly, sex and violence are big sellers) to actual private moments or criminal exploits that make their way into circulation (once again, sex and violence being favorites). Since the people who “playback” the experiences can become addicted if they “jack in” too often (the future tech slang here is not exactly inspired), the practice has been made illegal and Lenny—a former cop fired for unknown reasons—is seen as nothing more than a low-rent drug dealer by his best friend (and conscience) “Mace” Mason (Angela Bassett).

Despite her tough love method of trying to keep Lenny on something resembling the straight-and-narrow not paying much in the way of dividends, Mace sticks by him as he stumbles into a conspiracy to find and destroy a playback that shows the murder of a popular, politically-minded rapper (Glenn Plummer) by two patrol cops (Vincent D’Onofrio, William Fichtner). Given that Bigelow’s vision of Los Angeles in 1999 is one that never recovered from the riots in the wake of the acquittal of the police officers who beat Rodney King to a pulp, the violent clip has the potential to send the city up in flames if it goes public.

As the clock counts down to the dawn of the new millennium, Lenny, Mace, and Max (Tom Sizemore)—Lenny’s even sleazier private eye pal—find their lives in danger as several different villains emerge from the shadows in an effort to destroy the clip and kill anyone who knows about it.

It is easy to kick around movies from the past that deal with a future that is now in the past. Sure, we don’t have flying cars and there are no colonies of Earthlings on Mars, but that’s no reason to completely disregard movies that are not perfect fortune tellers. Viewed strictly through the lens of future tech that never actually happened, STRANGE DAYS fares better than most films. Given that it was set only six years after its production, it makes sense that Bigelow and her art direction team did not go overboard on futuristic touches.

Granted, the gear that allows people to record their experiences (including their emotions and sensations in the moment) for other people to relive actually never came to be (and hopefully never will). But given the leaps in virtual reality over the last decade, it does not feel like a stretch that we could see something like the technology in the film in our future.

But focusing on the future technology misses the point that STRANGE DAYS makes when it comes to the self-destructive tendencies of the human race as a whole and people as individuals. On the macro level we have a Los Angeles that is ready to collapse from the opening moments as militarized cops patrol the streets, cars burn, and people chase down and beat each other in full view of everyone, but on the micro level, we have Lenny Nero, willingly sinking into the cesspool of the memory black market as he refuses to get over being dumped by his aspiring singer ex-girlfriend (Juliette Lewis). To her great credit, Bigelow seems far more interested in exploring the question of whether or not the planet would be better off if the metaphorically-named Lenny Nero simply played his fiddle while Los Angeles—and, by extension, the rest of the world—burned.

It is this bleak, borderline nihilistic tone mixed with cartoonish violence and an out there Fiennes performance that sets STRANGE DAYS well apart from the glut of other ’90s cyberpunk movies. While Bigelow does use some of the same stylized fashions and rave culture tropes that other flicks of the time indulged in, these moments are far from the focus. Instead, Bigelow and her writers pull off the trick of subtly switching protagonists halfway through, moving from Lenny as the driver of action to the more righteously angry and morally upright Mace. It’s a clever idea that starts the film out in the tradition of Bigelow’s focus on hyper-masculine men and the toxicity that can consume them before expanding to a more complicated, yet traditional hero—who just happens to be an African-American woman.

Given the loaded subject matter that comes with the murder of a black man by white cops, it’s an appropriate storytelling choice and it avoids turning the film into yet another white savior narrative. If anything, the filmmakers’ choice to keep Lenny an active, but largely ineffectual force once the focus shifts to Mace allows her to be a reluctant savior to a guy she can’t help but care about, even when it seems he isn’t that interested in saving himself.

Despite all the praise I’ve heaped on it, STRANGE DAYS is far from a perfect movie. The shots of the characters from the real world while they experience the playbacks are too numerous and silly since nearly everyone overplays the reactions. Lewis is miscast as an obsessive woman of desire. While it makes sense that someone as desperate as Lenny might cling to her memory as a salve for his bruised soul, she plays her role with a one-note, sneering, whiney tone that quickly becomes tiresome.

Even though it is somewhat necessary to drive home just how horrible one of the killers after the memory clip is, the use of an extended rape and strangulation scene shot in first person is absolutely brutal, stomach-churning, and nearly stops the film in its tracks. And an ending that feels like a studio compromise to avoid sending the audience out on a total bummer does not thematically line up with everything that Bigelow does up to that point, but for a change it is not a deal breaker.

What eventually works incredibly well about STRANGE DAYS is the way it captures both the hopefulness of some and the paranoid feeling of doom from others on the eve of the new millennium, even without the added layer of sci-fi thrown in. Considering the film was made and released before widespread concerns about the potential Y2K computer issues shutting the world down, that’s an impressive bit of future forecasting of a world that was not quite certain what to expect once the clock struck midnight.

Even though some of the production feels a little dated when it comes to music and fashion choices, STRANGE DAYS still feels admirably fresh. It’s an interesting stop along the way to better work from Bigelow and Fiennes and might just contain Bassett’s best performance. It also marks a unique attempt to reconcile the absurdities of studio action films at the time with something more far-reaching in terms of forcing the audience to think about the consequences of relying on quickly evolving technology. It’s a shame the studio lost its nerve when it came time to release it, but that makes it ripe for re-discovery now—especially when its themes are just as relevant as ever. 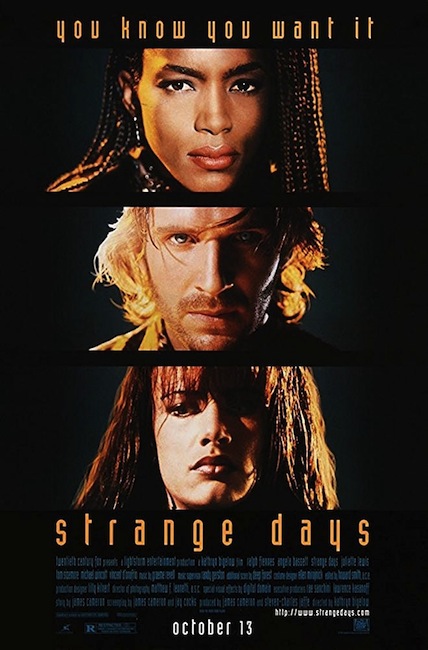