New York City is an island with millions of people living on it, a place that acts like a Petrie dish of primal human emotion. While politically and culturally it may be in its own weird bubble, NYC undeniably has a concentration of unchecked human behavior, the kind of city where a local can blow their top with rage due to someone walking too slow in front of them on the sidewalk. Every aspect of life is turned up to maximum volume, and that goes for the positive as well as the negative.

During a holiday such as New Year’s Eve, the goodwill felt by these millions of people literally spills out onto the streets, covering them completely—post-New Year’s Eve Times Square looks as if a party had exploded, with tons of detritus and ephemera left on the ground. What if all that energy, positive and negative, could take physical form? Furthermore, what if it could be weaponized? 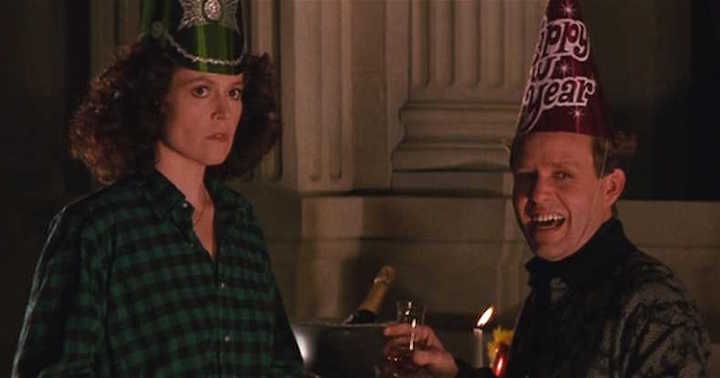 That wacky premise is just one of the clever concepts to be found in 1989’s GHOSTBUSTERS II, a sequel that has oddly not grown much in appreciation over the last 30 years. Granted, it has its flaws: on a surface level, it’s a naked attempt to recapture the lightning in a bottle success of its 1984 predecessor, not just bringing the entire team from the first film back but essentially making a carbon copy of that movie’s structure, with the ‘Busters facing a world-ending supernatural threat that the rest of NYC don’t take seriously until it’s nearly too late.

Part of the original movie’s comedy was the uniqueness of its out-there premise, and the sequel’s attempt to hit the reset button as well as find new ways to juxtapose ghosts with goofs is uneven at times.

There’s also the shift in tone and approach to some aspects of the film due to the franchise’s success, specifically the spin-off The Real Ghostbusters cartoon series. That show’s younger audience meant that the big screen sequel felt beholden to carry over some of its elements, resulting in things like Annie Potts’ Janine being a version of the cartoon’s depiction of her character rather than the down-to-earth Brooklyn woman of the original, and Slimer no longer being a wild card threat but instead being more like the Ghostbusters’ pet. It’s the first instance of the Ghostbusters franchise playing things a little too safe, sticking closely to what works rather than taking the wild possibilities presented by writers/stars Dan Aykroyd and Harold Ramis’ concept and running with it. 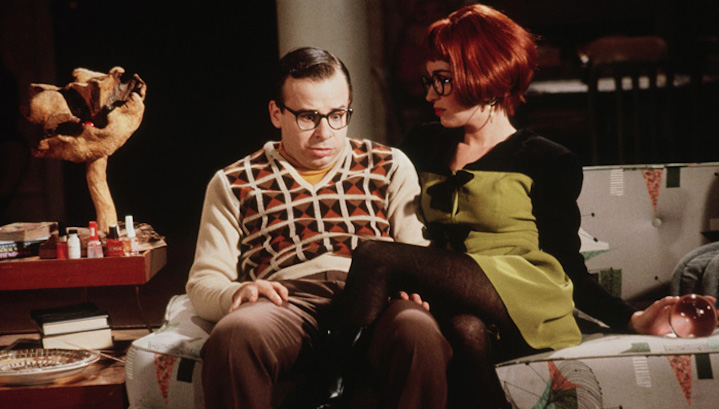 Those issues aside, what makes GHOSTBUSTERS II great is in the ways it doesn’t play things safe, taking its characters seriously and telling a story that, while structurally similar, is all its own. Where the original GHOSTBUSTERS was a genre-flavored extension of the “slobs vs. snobs” comedies that director Ivan Reitman, Aykroyd, Ramis, and Bill Murray had come to prominence making (where the slobs were the ‘Busters and the snobs were the nonbelievers, as well as an ancient demon after world destruction), GHOSTBUSTERS II is a horror comedy about finding the strength to overcome life’s disappointments. The reset of the ‘Busters once again being treated like losers and frauds after the events of 1984 may seem at first like a contrived way of getting the characters back to their starting point, but in fact it makes them and the film more poignant.

As Ray (Aykroyd) and Winston (Ernie Hudson) use what little clout they have left to play children’s birthday parties (where they’re ridiculed for not being He-Man, of course), Egon (Ramis) is sequestered away doing experiments on married couples and kids ,while Venkman (Murray) is the host of an exploitative, tabloid-esque psychic phenomena TV show (paying off a throwaway line from the first film calling Venkman a “game show host,” as well as perhaps being a sly reference to Aykroyd’s public belief in the supernatural).

Even the burgeoning relationship between Venkman and Dana Barrett (Sigourney Weaver) at the end of the first movie has fallen apart off screen here, with Dana’s personal life also in a rocky place, divorced from another man and left with a new baby. Even villains Vigo (physically played by Wilhelm von Homburg, with voice work by Max Von Sydow) and Janosz (Peter MacNicol) are feeling the holiday blues, desperately wanting a child and a wife, respectively. 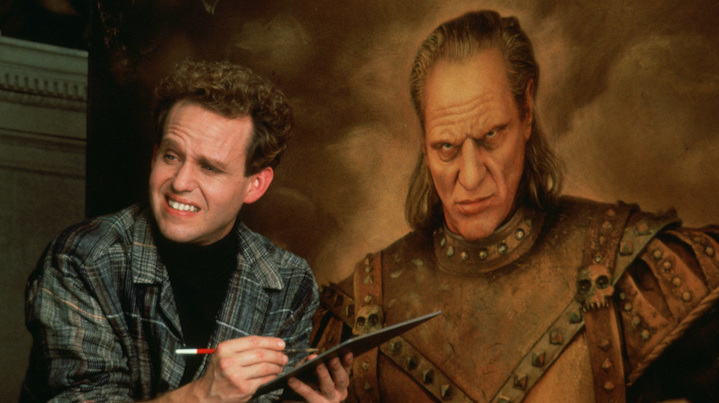 All this makes GHOSTBUSTERS II a sort of precursor to Ramis’ later existentialist comedies like GROUNDHOG DAY (1993) and THE ICE HARVEST (2005), which similarly concern characters whose lives could use some serious revamping. The film is set during the holiday season, which traditionally is a time for many to reflect and regret, and while Reitman never plays the movie for pathos, there’s a bit of a melancholy edge to it that gives the comedy and special effects sequences more weight than they might have had otherwise.

While the ennui of New Year’s is certainly present in the film, GHOSTBUSTERS II is ultimately a hopeful movie. First, things hit rock bottom: the river of slime that the ‘Busters find beneath NYC that’s been created by Vigo’s evil and passively fed by people’s negative emotions is eventually unleashed, causing the Mayor’s (David Margulies) dismissive edict of “being miserable and treating people like dirt is every New Yorker’s God-given right” to become realized as supernatural chaos. Dana is forced to move in with her ex, and the ‘Busters are committed to an insane asylum. 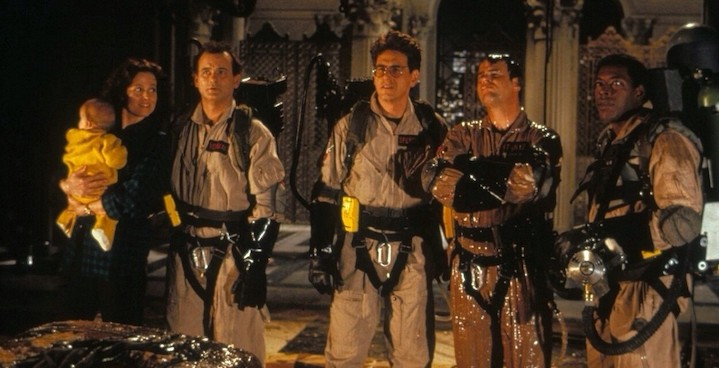 Fortunately, the boys discover that the slime can be positively charged as well as negatively charged, and, once freed, they’re able to put that fact to use by lathering the Statue of Liberty in it and having her supernaturally animated self symbolically (as well as literally) lead the attack against the selfish, bitter, hateful Vigo. Ramis, Aykroyd, and Reitman aren’t subtle with their metaphor, as Vigo’s slime shell protecting his museum headquarters is broken in part due to the positivity generated by the crowd outside it loudly celebrating New Year’s, but it’s affecting all the same. 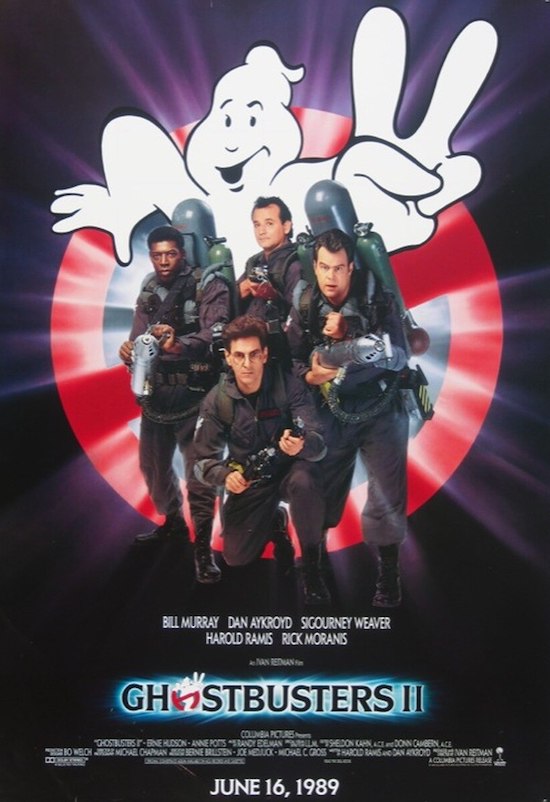 The positive aspects of New Year’s Eve transform the characters, as Venkman and Dana put their checkered past behind them and find a way forward together, Louis Tully (Rick Moranis) becomes a Ghostbuster, and the ‘Busters themselves are taken seriously again. Even the ghosts aren’t seen as merely pests or evil to be destroyed or locked away, as the slime and Slimer himself prove that Good can exist in the afterlife.

GHOSTBUSTERS II is one of the best New Year’s Eve movies because it says that this slime that we’ve created doesn’t have to cause more anger and hate, but can be redirected and transformed into a positive force for change, if we want it. Like Bobby Brown sings in his single from the film, “On Our Own,” “it’s up to us…you gotta learn to take control.”