“Well, of course they do,” you reply. “Alpha Blue Archives is one of the premiere distributors of vintage adult films! If they don’t have wood, they’re doing something wrong!”

Oh, silly reader! I wasn’t making some terrible joke about erections, I was telling you about their new collection of four rarely-seen films from psychotronic movie auteur Edward D. Wood Jr.! It also may have involved an erection joke. 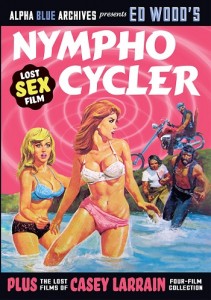 Pitched tents aside, Alpha Blue Archive has very proudly announced the release of four of PLAN 9 FROM OUTER SPACE director Wood’s least-seen sexploitation films , all originally made in 1971 and some of which have never before seen the light of home video!

The first, and most well-known, title is NECROMANIA, which out Trash Film Guru wrote about here! The other three titles are new to DVD, including THE YOUNG MARRIEDS, which was considered lost until 2004, THE UNDERGRADUATE, written by Wood and credited to director Ron Black, and NYMPHO CYCLER, a bizarre pic about a woman turned on by motorcycles and featuring Wood himself, in drag, as her husband!

All of the titles include additional bonus features starring the lead film’s female starlets! All of the titles street September 1, but we’ll have reviews of the film coming sooner than that! In the meantime, check out the trailer below and order from Alpha Blue’s site here! (Link and trailer may not be SFW.)