What’s that? You’ve read parts one and two and three of our list of the Top 50 Greatest Fake Trailers Ever Made, and STILL need more?  You’re crazy!  Nobody needs that many fake trailers!

Okay, here’s the next ten.

This SNL sketch, a fake trailer for a film about the return of Christ in the form of a Quentin Tarantino film, caused quite a stir as evangelicals found it completely offensive that satirists could make such a mockery out of the director of FOUR ROOMS. I kid! They hated that the character of Jesus Christ was used in a sketch with violence in it or something. It’s actually a pretty amazing short that pays great knowing tribute to Tarantino’s films, referencing both them and the films that they reference, such as when the music becomes a thinly-veiled strain of “Django”‘s theme. Despite the title, it doesn’t really take any stabs at religion itself at all — the closest it gets is a swipe at THE PASSION OF THE CHRIST‘s torture porn aspects.

Using the master of nonviolent civil disobedience in a violent context isn’t really revolutionary — “Saturday Night Live” had a GANDHI AND THE BANDIT sketch featuring Tim Kazurinsky as the Indian leader years before this. But UHF turned the concept into a full-fledged action trailer for a made-for-TV movie full of Mahatma mayhem. “No more Mr. Passive Resistance,” indeed.

Koogler, played by Mitch Hurwitz, is a character who exists for one episode of “Community,” a series no stranger to genre parodies. All of the characters inexplicably know him and react as though he’s always been there. It’s a great meta-joke, one capped by the episode’s closer, a mock ’80s frat comedy featuring the character in a variety of zany situations. If “The Simpsons'” SCHOOL OF HARD KNOCKERS had a live-action trailer variant, that variant would be KOOGLER. Here’s hoping season 6 brings a KOOGLER: DISORDER IN THE COURT sequel in which he attends law school.

From THE BEN STILLER SHOW

“The Ben Stiller Show” had a few trailer parodies during its one-season run, including primo ones like DIE HARD 12 and ADVANTAGE: AGASSI, the latter featuring Bob Odenkirk’s Armand Assante impersonation. One of the best is their pitch-perfect mash-up of Martin Scorcese’s CAPE FEAR and Eddie Munster, the latter a role Stiller played on “Saturday Night Live.” Worth it alone for Janeane Garofalo’s Juliette Lewis impersonation.

E.T. wants to touch you… to DEATH! Bob Blankenheim’s short imagines a much-delayed follow up the the Spielberg flick with an all-star (returning) cast welcoming back their old friend, who now has a legion of bloodthirsty cohorts. Plenty of fake trailers re-imagine childhood favorites in a bloodier context, but few do it with such commitment, and this feels positively epic.

Franchises are always being re-imagined, and this take on a “dark” version of Archie Comics may very well have served for the template for their “Life with Archie” and “Afterlife with Archie” comic book series — though you’d never catch the lead characters in Riverdale getting mixed up with the sordid escapades going on in de Villiers’ great short.

The David Cross/Bob Odenkirk series “Mr. Show” always did a fine job at bringing its many diverse sketches together, and COUPON: THE MOVIE on its own may require a bit of context because of it, as the set up is that every person in the United States is legally forced to watch the movie. The premise is just another layer of absurdity to the trailer itself, showing off a film about the explosive use of a coupon. Why would a movie everyone is required to see even need a trailer? It’s brilliantly done, down to the audience members excitably talking about their experiences at the end. 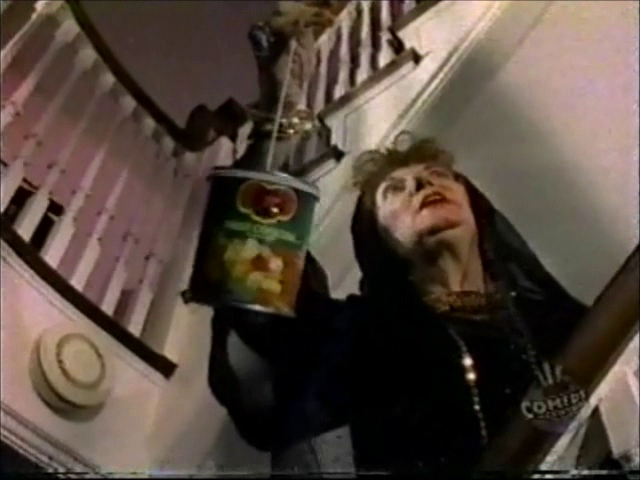 The Charleton Heston-hosted episode of “Saturday Night Live” actually featured two solid movie trailer parodies, but THE FRUITING is the better of the two, as it starts out like a juice commercial and soon turns into a horror film trailer about fruit on a rampage. Will Phil Hartman and Nora Dunn’s homes be safe? And is that RE-ANIMATOR’s David Gale as a priest? The episode also featured THE HUSTLER OF MONEY, a trailer for Scorcese’s THE COLOR OF MONEY, but with bowling, featuring John Mahoney as Paul Newman and Ben Stiller doing the Tom Cruise impression he was in the midst of perfecting.

12. ATTACK OF THE COSMIC FRANK-EINSTEIN FROM HAUNTED SPACE AND THE MOON (2013)

The overblown title is a perfect indicator for the level of humor in Zoran Gvojic’s great fake trailer for a ’60s sci-fi film made for a Roger Corman-inspired contest, but it’s Gvojic’s sense of comic timing and ability to replicate the style that really ties the work together. It’s one quick minute of clever, unexpected gags, well-executed titles and ambitiously silly jokes that poke fun at the genre without mocking it.

From Samuel L. Bronkowitz, the creator of THAT’S ARMAGEDDON! You will cream in your jeans when you watch the best T&A movie trailer ever made, with as many dumb gags per second as any of the Zuckers’ best works. Squeaky boobs! Terrible puns! Pied horse butts! We’re getting into the true greats now, folks.