First of all, let’s be honest, you’re probably tired of me changing the title of my column every week. Mildly amusing at first, gets old fast, right? Also it might not be such a good idea to put a day of the week in the title of the column in case it gets delayed. Let me know in the comments if one of these is good enough to settle on. If I don’t hear from you though I can do this forever. It’s pretty easy to come up with titles that either have fist, blood, steel, warrior or combat in them.

STRANGLEHOLD is another one from director Cirio H. Santiago, but it’s not as fun as FIRECRACKER or any of the other movies I’ve reviewed in this column before. It could easily be called “DIE HARD in a chemical plant” but you and I know it’s really more like UNDER SIEGE because Ryan Cooper (“JERRY ‘GOLDEN BOY’ TRIMBLE – PKA World Kickboxing Champion,” as his above-the-title credit calls him) is not exactly in-the-wrong-place-at-the-wrong-time. He’s pretending to be a clerk for Ohio congresswoman Helen Filmore (Jillian McWhirter, BLOODFIST VII-VIII), but he was actually hired by her father as private security. So when terrorists-but-really-more-like-thieves take over the Manila branch of Chemco and take the Congresswoman as one of their hostages, he’s not a reluctant hero. He’s on the clock.

I mean, would a clerk really have a ponytail like Eric Roberts in BEST OF THE BEST? Come on.

UNDER SIEGE cuts to the high tech situation room full of military brass whenever they need some exposition, STRANGLEHOLD’s is more like a small office. They provide Cooper’s credentials: “former Secret Service. But in his case, we retired him.” I think that’s supposed to make him sound like a loose cannon, but doesn’t it seem more like he was just really bad at his job? Because that’s kinda the idea you get from his poor judgment in this movie. At one point he leaves her alone, against her wishes, with a guy who turns out to be a traitor. When the shit goes down he’s allowed her to send him away to find a Pepsi machine. That’s when fake TV reporter Richter (Vernon Wells, COMMANDO) gets all the guests to give a thumbs up to the camera, say the Chemco motto “This is only the beginning!” and then opens fire on them. The survivors become his hostages and he pledges to kill one an hour and destroy the plant unless he gets $25 million. Also there’s the components for 10,000 gallons of KC70709 nerve gas in there, so there’s a whole thing about that too.

And all the Congresswoman wanted was a Pepsi.

In another UNDER SIEGE similarity Richter is a former counter-terrorism agent for the government, though he left in 1987 when he became “unstable.” You would think that background outclasses the Secret Service guy, but luckily Cooper is the kind of Secret Service guy who knows how to run around firing a machine gun, swing around on ropes, slide down poles, climb up things, and of course kickbox (although that’s saved for an hour and six minutes into the 73 minute movie). And of course when he comes across a small lab full of chemicals and beakers he knows how to make himself a bomb.

He’s gonna need those skills because Richter is a sick bastard. He laughs like this: 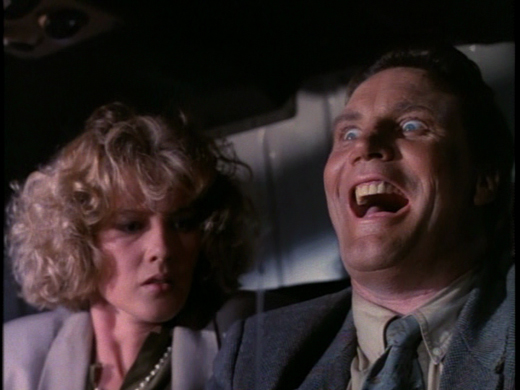 and at one point he performs “test marketing” by firing deadly nerve gas onto the relatives of Chemco employees gathering outside to check on the safety of their loved ones. And when he does something evil he tends to follow it with an awkward joke or declaration, like when he says “God I love it when things turn out ship-shape!”

Of course, Cooper and a few others manage to escape and sneak around shooting at bad guys. They climb into a tunnel and get chased by a river of foamy acid. Filmore has to shoot a guy and gets dubbed “Congresswoman Rambo.” She gets captured again and, as happens in these types of movies, some of the henchmen can’t control themselves from trying to rape her. But Richter appears to rescue her, invites her to his quarters to woo her with wine, probly doesn’t realize he’s as bad as them.

Trimble is low on the white martial artist totem pole, but I like him. Recently it was cool to see him chasing down Steve Austin in THE PACKAGE http://www.outlawvern.com/2013/04/24/the-package-2013/ . But he doesn’t really have the screen presence to transcend a movie this dumb. The one scene where he gets to do something interesting acting-wise is when he goes into the engine room Richter’s escape ship, says “I’m one of Richter’s men!” and excitedly admires the engine like a yahoo, causing the workers to brag about their equipment and reveals what he needs to do to shut down the power.

Another memorable moment is at the very end when out of nowhere he has an Australian accent. Since Trimble is American I don’t think this is an accent slip. More likely he just wasn’t available to loop the scene ’cause he was back in the States filming HEAT. Yes, Michael Mann’s HEAT, that was his next movie after this. But how ’bout this, let’s say he was doing it to make fun of Richter’s accent. Or what if this was supposed to be a climactic reveal, that he was Australian all along? Maybe that’s what it is. I’m not sure I understand what the significance of that would be, but still. Big twist.

Here’s a question: why is it called STRANGLEHOLD? Is it because Richter has a stranglehold on the U.S. government, having one of their politicians hostage as well as a serious cache of WMD? Perhaps. But it might also be taken literally. At the end it finally turns into fisticuffs and I thought when Cooper did this move: 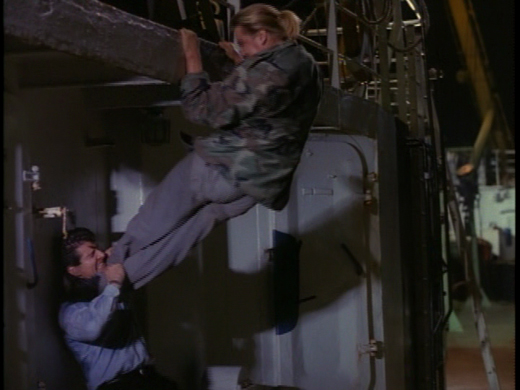 that that may very well have been the stranglehold of the title. But then he followed it up with this: 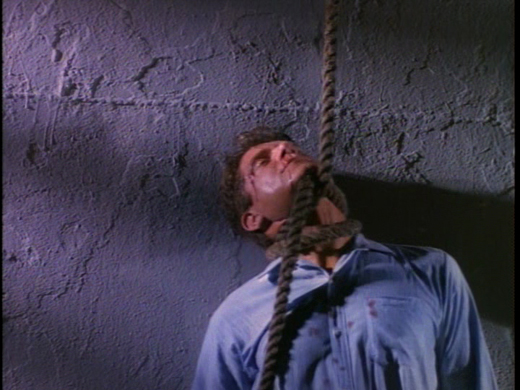 and obviously that’s a pretty serious stranglehold, hard to get a better stranglehold than tying a rope around a guy’s neck and throwing him over the side of a battleship. Still, that doesn’t stop the next guy Cooper fights from trying to get in on the strangling: 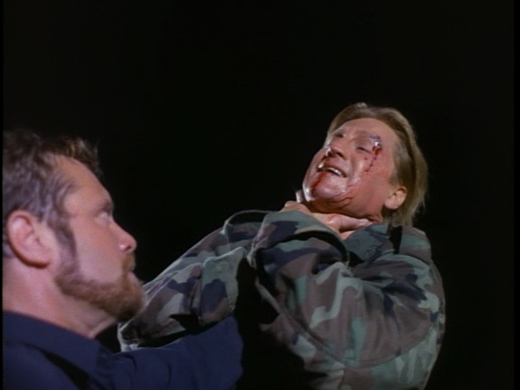 and then Richter himself takes a shot: 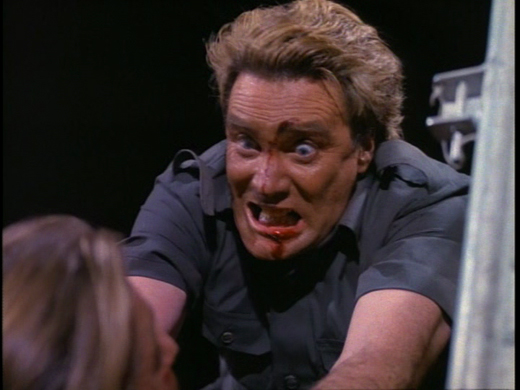 and even some smoke tries to strangle Representative Filmore: 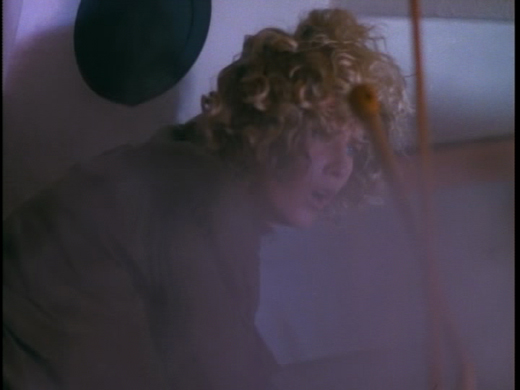 But ultimately Richter is strangled by an exploding boat, so I guess I’ll go with my first guess, the “he has them in a stranglehold” interpretation.