This year’s Overlook Film Festival is being held in New Orleans, a world away from last year’s event at the Timberline Lodge (the iconic exterior of the Overlook in Stanley Kubrick’s THE SHINING) in Mt. Hood, Oregon. This year’s festivities will be headquartered at the Bourbon Orleans Hotel, purportedly one of the most haunted buildings in the United States. In addition to an exciting slate of new genre features, the Overlook Film Festival will include immersive performances (including one from the infamous Blackout company), panels on interactive content and immersive theater, several new VR experiences, a number of live events from trivia to readings and presentations by Grady Hendrix, and an overarching “Immersive Game” that takes place over the four days of the festival.

Daily Grindhouse will be covering the 2018 Overlook Film Festival both on the ground and remotely, and to kick off our coverage here are capsule reviews of some of the films playing the festival we have covered at previous events. Stay tuned for updates and new coverage throughout the fest!

15-year-old Mia (Luna Wedler) has moved to a new town with her parents. School is tough enough without having to be the new kid, especially coming into a place where the social has long since been established. But Mia has more problems than just fitting in with the cool girls: Her body is undergoing bizarre changes she can’t explain and that no sex ed class ever talked about. Just as she begins to gain some acceptance with the popular girls in her class, Mia is forced to start finding ways to cover up the ever-expanding bruises on her body. Tensions are running high at home, too, with her parents expressing increasing frustration with Mia’s odd behavior while Mia struggles to understand her own feelings for new friend Gianna (Zoë Pastelle Holthuizen). BLUE MY MIND takes a cue from a couple of recent Fantastic Fest alumni: Like Julia Ducournau’s RAW, it examines adolescent female relationships and burgeoning sexuality, and like Lucile Hadzihalilovic’s EVOLUTION, the film uses body horror imagery as a metaphor for adolescent transformation. That familiarity is not necessarily a problem, as BLUE MY MIND is considerably different from both of those films–not as gruesome as the former, and not as quiet and contemplative as the latter. Much of this film focuses on Mia’s day-to-day life and “normal” interactions like going to class, smoking outside school, hanging out at a friend’s house, and partying. The beats are familiar, but the story unfurls at its own pace. Some viewers may find that admirable, while others may just be frustrated. Regardless, this is an impressive debut feature from writer/director Lisa Brühlmann, and certainly marks her as a talent to watch. – Jason Coffman

While driving on an isolated stretch of road, a group of college students carpooling on a long drive are stranded when one of the tires on their SUV blows out. They’re hanging out in the hot sun replacing the tire when they learn the flat wasn’t an accident. Someone shot out the tire, and now they’re sniping at the group with lethal accuracy. Pinned down and separated, the survivors are forced to come up with a way to make it out of this standoff alive without knowing who they’re up against or why this is happening. DOWNRANGE is a twist on slasher tropes, opening with zero introduction to its characters and jumping directly into the action. The young cast gets picked off one by one, but instead of standard slasher weapons, the killer is taking them out from a distance. It’s relentlessly brutal; things go about as well for the characters as one would expect. This being a Kitamura film, there are plenty of spinning cameras and flashy moves, but the film also ends up being surprisingly political. Whether this is intentional or not is up for debate, but given the number of mass shootings in this country, DOWNRANGE plays less like an outrageous fiction and more like the kind of news story you’d read about any day of the week. That plays out exactly as it should, and the film ends on a note of incredibly bleak humor. It looks great and has plenty of impressive mayhem and effects, but some audiences may be too unsettled by the fact that the events depicted in the film could literally happen at any time to make it to the end credits. – Jason Coffman 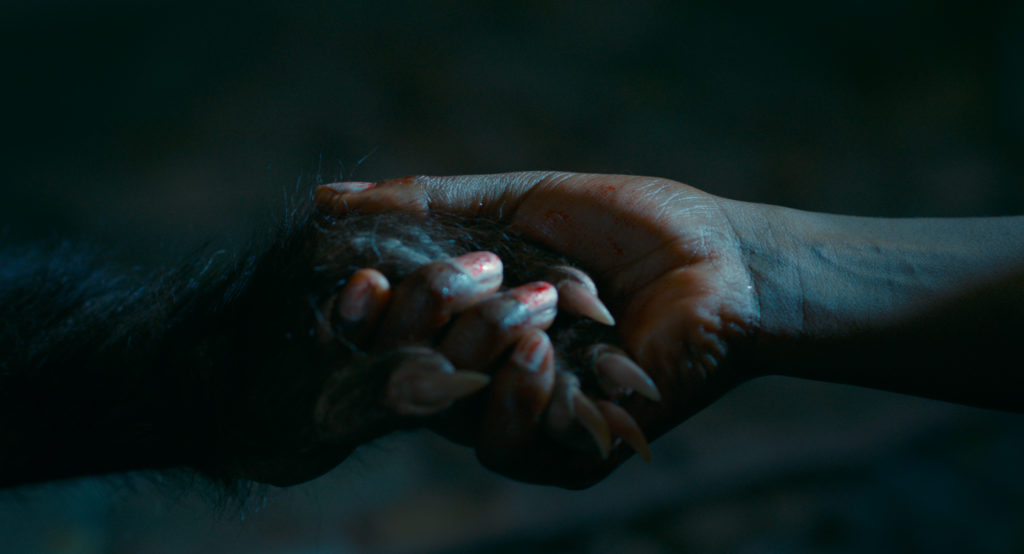 Pregnant, well-to-do Ana (Marjorie Estiano) lives alone in the apartment she shared with her ex, but she’s feeling overwhelmed. She hires struggling caretaker Clara (Isabél Zuaa) as a live-in assistant with the intent of keeping her on as a nanny after Ana gives birth. But Ana is having some unusual complications with her pregnancy that include wandering first her apartment and then the city during the full moon. As an undeniable attraction grows between the two women, will Clara be able to figure out what is happening to Ana before she harms herself or someone else? The scope of GOOD MANNERS is much wider than its claustrophobic first half would suggest, following through with its fantastical story set against the backdrop of people barely scraping by. The performances are excellent, and there are some amazing practical makeup and creature effects. As usual, the CGI effects in the film pale in comparison, but what really draws in the viewer are the characters and the sheer unpredictable nature of the story. GOOD MANNERS has a number of genuine surprises, and to say much more about it would be doing the film a grave disservice. Suffice to say it’s beautiful, gruesome, funny, and heartbreaking. This is one of the top genre films of the year, and one of the best films of the year regardless of genre. – Jason Coffman 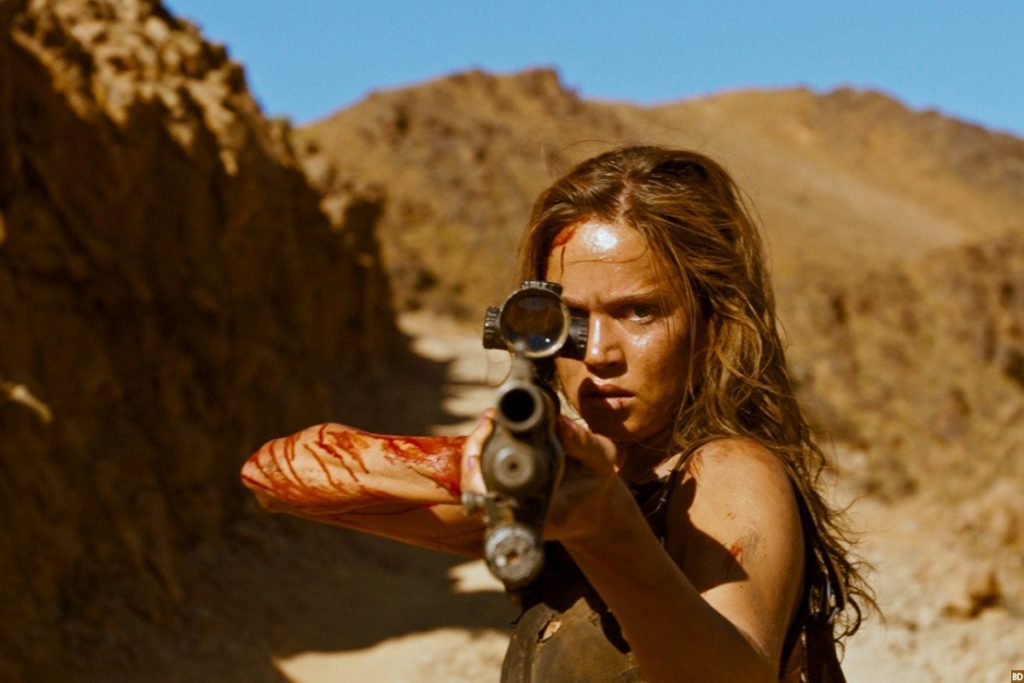 Richard (Kevin Janssens) has planned a weekend hunting party with a couple of friends, but he gets there a day early with his young mistress Jen (Matilda Anna Lutz) to get in some quality alone time. Unfortunately his plan is derailed when Stan (Vincent Colombe) and Dimitri (Guillaume Bouchede) show up just a few hours after Richard and Jen anyway. The four party that night out under the stars, and Stan takes Jen’s casual flirting far too seriously. Stan rapes Jen the following morning while Richard is out running an errand, and when Richard returns he knows immediately the situation could ruin all their lives. To cover up the crime, they push Jen off a cliff and leave her for dead. But she has much more fight in her than they could imagine, and soon the boys get their hunting weekend after all–just not quite the one they expected. REVENGE is as straightforward as its prosaic title: This is a classically-styled “rape revenge” movie that would have fit right in on any drive-in screen in the 1970s on a double bill with I SPIT ON YOUR GRAVE or THRILLER. The fact that it’s from a female writer/director is unusual, though, as is the sheer amount of blood on display here. Debut feature filmmaker Coralie Fargeat may have been inspired by some of the horror films coming out of her home country of France for the last two decades, specifically the “New French Extremity” spearheaded by Alexandre Aja’s HIGH TENSION and culminating in Pascal Laugier’s MARTYRS. REVENGE is a beautifully shot film with gut-wrenching tension and a spectacular score by Rob (who also provided the score for Franck Khalfoun’s MANIAC remake) to accompany Lutz’s intense and gruelling lead performance. At its core this is still a “rape revenge” movie, and anyone who is not a fan of the subgenre is unlikely to have their mind changed by this film. Anyone who can stomach it, though, is advised to seek out this film as soon as possible. This is an excellent debut feature for Fargeat and should by all rights be a star-making showcase for Lutz. Keep an eye out for whatever they’ve got in the works!  – Jason Coffman

Grey Trace (Logan Marshall-Green), a freelance mechanic in the not too distant future, is an analog man in a digital world. Nostalgia and fetishism for outdated technology lead Grey and his wife Asha (Melanie Vallejo) to the home of tech genius Eron (Harrison Gilbertson) who commissioned Grey to put together a classic American muscle car for his collection. On their trip home, Ash is killed and Grey is left paralyzed from the neck down. Eron comes to his rescue with a new technology known as Stem — nothing more than a small computer chip, voiced by Marshal-Green — that when implanted, will give Grey the use of his limbs again. Put under the care of his doting mother, Grey begins to learn that the death of his wife and his being paralyzed may have been more than just an accident; he starts a journey where everything is not quite as it seems. UPGRADE kicks into high gear and the ultra violent revenge tale comes alive, reveling in its B-movie pedigree. Writer/director Leigh Whannell — best known for penning a few SAW and INSIDIOUS sequels — really stretches his comic muscles on the script. The relationship between Stem and Grey recalls that of your best buddy cop actioners of the ‘80s and ‘90s with Marshall-Green taking on the straight man role and Stem — never too jokey with an almost Vulcan like straightness — delivering the funniest lines. There’s a slick visual style to UPGRADE that knowingly recalls ‘80s graphic novels and anime. There’s plenty of grime, but it’s all so beautifully shot. There’s enough saturated reds, greens, and purples to sate the neon noir fetishists and even the grimier locations are beautiful, particularly to anyone who digs ‘80s cyberpunk graphic novels and classic anime in the vein of AKIRA. At its best, UPGRADE recalls an HBO Thursday-night action premiere from the ‘90s or a direct to video cult-classic; think of it as the exploitation take on Spike Jonze’s HER. It’s the kind of movie that would have had all the teenagers in the neighborhood talking about it the next day in the schoolyard. UPGRADE takes its story seriously, but never itself. – Mike Vanderbilt 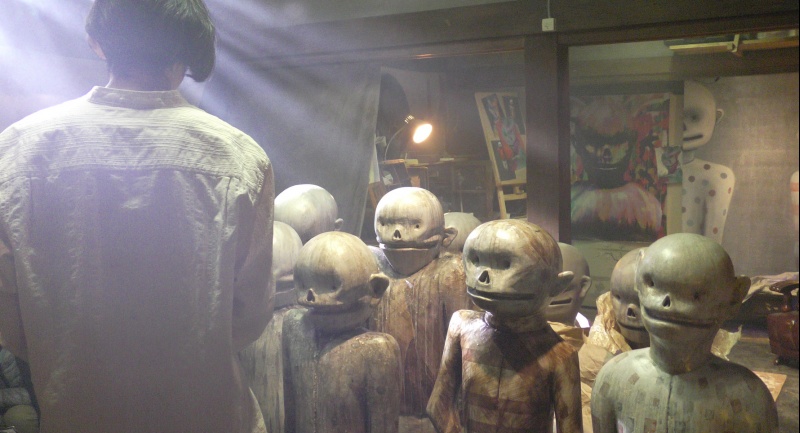 After a fire destroys a small school for art college prep, the school moves to a remote cottage in serious disrepair. While cleaning up the area around the cottage, the school’s teacher finds a bag of dried clay buried in the yard. She takes it into the school and the students use it for their sculpting lessons, but this is no ordinary clay. Soon the students and teacher are fighting for their life against a diabolical supernatural menace that can take over their bodies and warp itself and their flesh to its will. VAMPIRE CLAY is the feature directing debut of Sôichi Umezawa, an established special effects artist who has been working in the Japanese film industry for twenty-five years. This was obviously a labor of love for Umezawa, a small independent film packed with amazing and imaginative makeup and special effects work. It’s pretty fun when the action kicks in, but that takes a bit longer than it probably should have. The film also has a RETURN OF THE KING problem where it seems to hit a good point for a solid ending about five times in the final act. Still, while it’s narratively messy and a bit draggy when it gets mired in exposition, VAMPIRE CLAY is well worth a look for any fans of old-school practical make-up and effects in their horror. – Jason Coffman