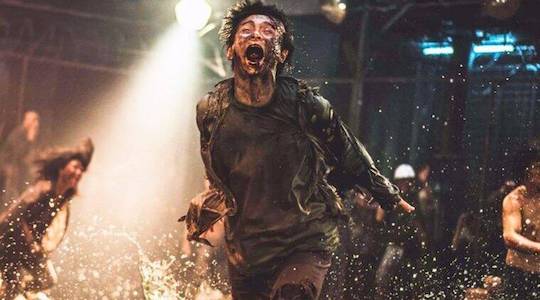 PENINSULA, the sequel to 2016’s TRAIN TO BUSAN, enters into familiar sequel territory. With the exception of an opening sequence, the majority of the film takes place four years later, finding the Korean peninsula essentially an isolated and abandoned hellscape full of zombies and little else. Yeon Sang-Ho returns to the infected world created in TRAIN and expands upon it. PENINSULA treads sequel territory similar to works like ALIENS, DAWN OF THE DEAD (1978), THE ROAD WARRIOR, and many more. These are cases where filmmakers strive to keep the core essence that made the original compelling and successful while broadening out to show greater repercussions and new wrinkles in this doomed planet they’ve created.

TRAIN TO BUSAN didn’t reinvent the zombie subgenre, but it provided a taught storyline using confined spaces and a surprisingly effective emotional through line. PENINSULA attempts to maintain that dramatic personal touch while adding more elements and exploring a whole city instead of a few train cars at the time. And while Yeon doesn’t always succeed at marrying the two, PENINSULA is still a joyous adventure recalling the best cinematic expansions while at least attempting an earnest poignancy within the characters. 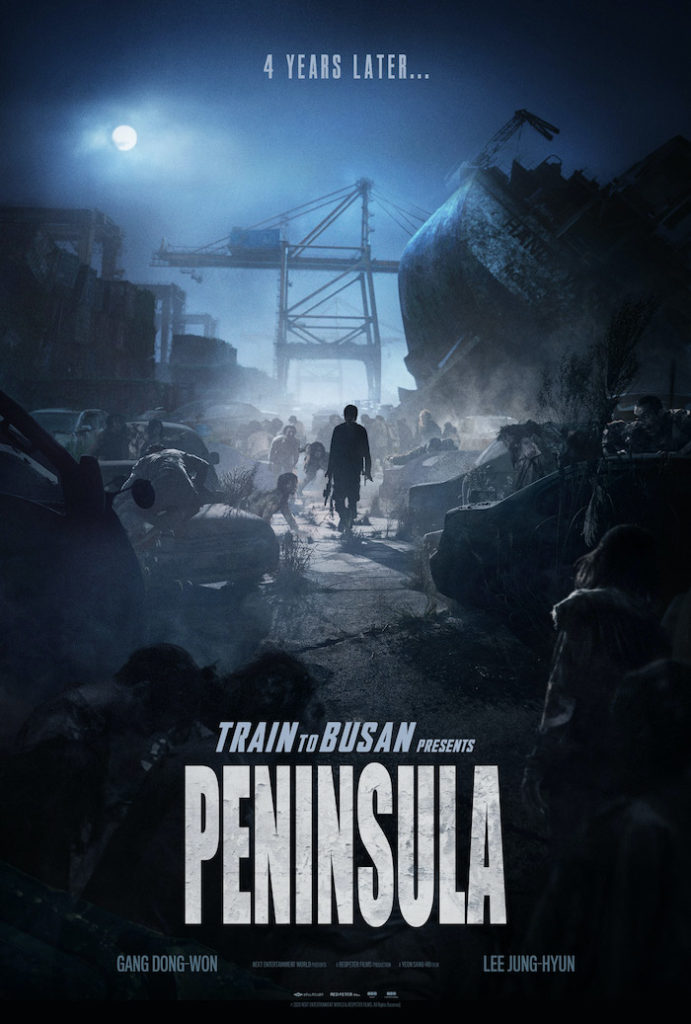 There are certain rules that one must abide by in order to create a successful sequel. Number one: the body count is always bigger. Number two: the death scenes are always much more elaborate – more blood, more gore – *carnage candy*. And number three: never, ever, under any circumstances, assume the killer is dead.

PENINSULA (also known as TRAIN TO BUSAN PRESENTS: PENINSULA or TRAIN TO BUSAN 2 in some places) has a brief introductory sequence that matches up pretty closely with the aftermath of the previous film. People are rushing to escape the zombie horde as more and more cities fall to the undead monsters. This includes fleets of ships seeking refuge, only to be turned away by multiple countries for fear of contamination (which proves pretty founded as a small outbreak occurs below decks on a couple of boats). Eventually most of the Korean refugees end up in Hong Kong.

Gang Dong-Won plays Jung Seok, one of those refugees seen as an unclean and unwanted interloper who lives a life of squalor and degradation. Once a captain in the army, he retains his fighter ways but is plagued by his failure to protect family—of which he is constantly reminded by his brother-in-law, Chul-min (Kim Do-yoon).  The two are part of a crew to creep into the quarantined peninsula to steal millions of dollars. Complications ensue with the zombies as well as the remaining denizens of the abandoned hellscape.

Unit 361, former soldiers turned savage marauders led by the bloodthirsty Sergeant Hwang (Kim Min-Jae) and the calculating Captain Seo (Koo Kyo-hwan), effectively running the city through brutality. Meanwhile, Min-jung (Lee Jung-hyun) has trained her two young daughters, Joon (Lee Re) and Yu-jin (Lee Ye-won), to navigate their harsh environment while they all tolerate their absent-minded grandfather, Elder Kim (Kwon Hae-Yo). All of these factions are on a collision course over the prospect of escape. 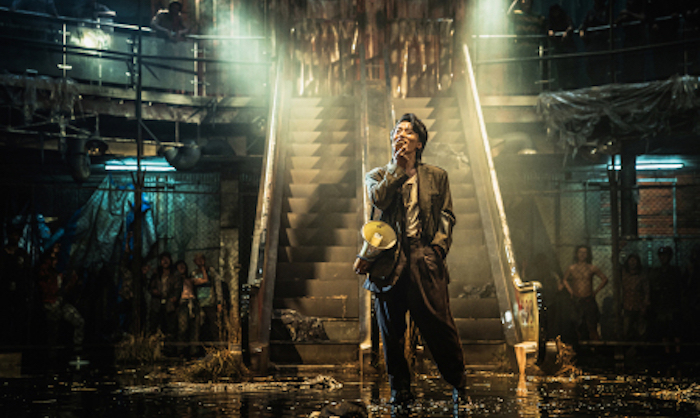 PENIINSULA’s blender pitch is LAND OF THE DEAD meets THE ROAD WARRIOR with touches of ESCAPE FROM NEW YORK and 28 WEEKS LATER. There are numerous destructive car chases throughout the ruined metropolis, a group of militant villains, and outsiders trying their best in this dangerous place. While PENINSULA was made before the COVID-19 outbreak, it is impossible for it not to be on the minds of viewers; a quickly spreading pandemic that gets exponentially worse until a whole country is put on lock down from various other nations. The mistakes, selfishness, and societal disintegration isn’t just relegated to apocalyptic films like PENINSULA anymore—it is now in the morning paper or on the nightly news. That helps bring both an immediacy to the story while also sending viewers’ minds back to the crisis that lies beyond their front doors. 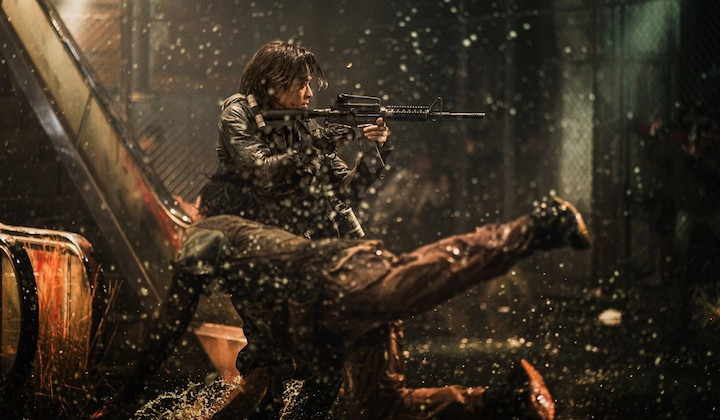 There is a lot to like about PENINSULA, with director Yeon (who also co-wrote the film) refining his ability for staging action that was already engaging in TRAIN TO BUSAN and 2018’s PSYCHOKINESIS. Gang turns in an excellent performance as the clichéd tortured warrior who is coming back for one last job, lending humility to the role and palpable sense of despair. He’s also a badass that pulls off multiple impressive moves that elevate him into a star to watch.

Min-Jung’s family is incredibly likable and compelling — the daughters shining with equal parts adorableness and scrappiness when squaring off against everything set before them. The two are adolescent Furiosas whose capability, determination, and resolve is evident even amidst childish bickering. The other characters are mostly paper thin but adequately fulfill roles from movies like DAY OF THE DEAD, WAR FOR THE PLANET OF THE APES, and 28 DAYS LATER. 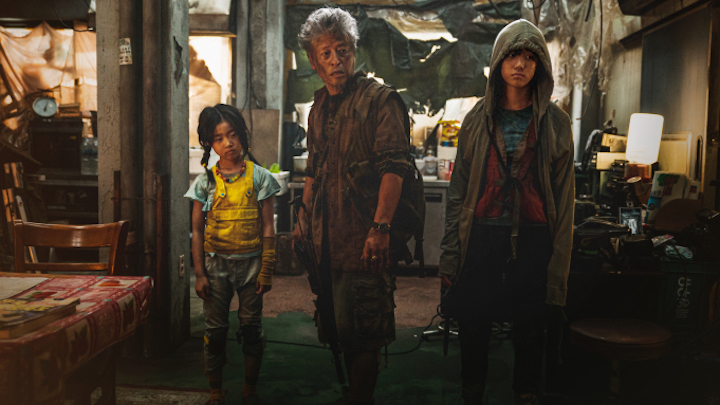 See, to live is to suffer
But to survive…
Well, that’s to find meaning in the suffering

PENINSULA boasts some smart innovations to the zombie film with survivors using resourceful means to combat the corpses. It also has many compelling action sequences — including parts that feel akin to urban versions of George Miller’s postapocalyptic vehicular mayhem. But it is flawed through heavy use of unimpressive CGI, with a lot of trucks and revenants become cartoonish. It works spectacularly when utilizing practical f/x along with real actors, sets, and cars, but is jarring next to moments that feel like cut scenes from Dead Rising.

Yeon falters trying to inject PENINSULA with one of the most notable aspect of TRAIN TO BUSAN — a sincere emotional connection in a situation that’s rapidly losing its humanity. There are too many moments meant to be moving, but instead play as bathetic and drawn out with obvious conclusions. Ultimately, PENINSULA lacks elements that are needed to make these scenes feel genuine and thus doesn’t connect as strongly as possible. 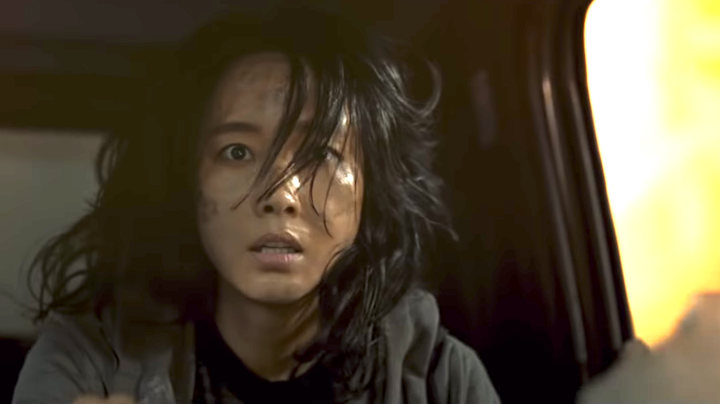 While flawed in execution, the approach to expanding this universe is fairly novel and feels like a natural extension of what was presaged in TRAIN TO BUSAN. A lot of the action set pieces and set design are incredibly exciting and there are a bunch of characters to enjoy and cheer for throughout the film. PENINSULA is a high-octane companion piece to the confined terrors of TRAIN TO BUSAN and, while not as effective as its predecessor, remains a thoroughly enjoyable sequel that will delight many.

[Please note: PENINSULA is available to watch in select theaters in the United States. But multiple health experts have warned that cinemas are one of the highest risk areas to go during this pandemic. Please use your best judgment. The Well Go Entertainment film should be on VOD in the not-too-distant future and will be on Shudder in early 2021.]