Released August 28th, 1992 Paramount’s PET SEMATARY TWO sought to capitalize on the moderate success of it’s 1989 predecessor.  Returning director Mary Lambert originally sought to continue the story of the Creed family by focusing the sequel on the Ellie Creed, now in her teenage years. The studio wasn’t convinced a teenage girl could carry a horror film, so going off a script by David S. Goyer (later rewritten with credit given to The Adventures of Brisco County Jr. scribe Richard Outten) an “original” story was spun detailing the horrors befalling the Mathews family after their arrival in Ludlow, Maine and discovery of the titular Pet Sematary.

Quotes are used when using the word original because on paper PET SEMATARY TWO follows the pretty standard, uninspired sequel switcheroo gimmick most films get caught in the trap of. This time around the catalyst is a dog being resurrected instead of a cat. The film centers around children (teens to be more accurate) raising their dead parents in an effort to keep the family together instead of vice versa. Recurring themes of loss, grief, and denial are all present once again, but there’s also the nagging little detail that this is an early 90s pre-Scream horror film as opposed to the 1989 original. 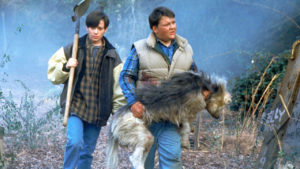 And oh man, what a difference those three years make.

SEMATARY TWO opens with Hollywood actress and estranged matriarch of the Mathews clan Renee Hallow (TO LIVE AND DIE IN LA’S Darlene Fluegel) being electrocuted on the set of her most recent horror movie Castle of Terror, right before the eyes of her son Jeff Mathews played by good ole’ Eddie Furlong (hot off the heels of TERMINATOR 2: JUDGEMENT DAY the summer before). Jeff’s dad (Anthony Edwards) decides to move the two of them back to Ludlow (Renee’s hometown and the setting of the first film) in an effort to “get Jeff out of Hollywood.” Jeff quickly becomes friends with resident fat-kid-with-a-hot-mom Drew Gilbert (Jason McGuire), and runs afoul school bully Clyde Parker (Jared Rushton, playing a slightly older version of his prick kid character from HONEY, I SHRUNK THE KIDS). Drew’s family is rounded out by his aforementioned mother (Lisa Waltz) and town sheriff step-dad Gus played by none other than Clancy fucking Brown.

This film is definitely not an adaptation of King’s work, but it does manage to pass itself off as a reasonable facsimile at times. There’s a undercurrent of teen angst throughout the film, something that’s not exactly foreign to King’s novels. Dealing with divorce, death, bullies, watching your parents move on and learn to love again…it never quite reaches Stand By Me level pathos but it nudges that line. There’s also a scene where Anthony Edwards’ character has a sex dream where he’s fucking a topless girl with the head of a dog while a Traci Lords (?!) sung power ballad plays in the background. I don’t know how many Stephen King books you’ve read but that’s pretty on brand.

The music in SEMATARY TWO bares mentioning because yes, this was a 90s film and effort was clearly put into scoring some scenes with what was at the time contemporary tuneage. L7, Dramarama, and The Jesus and Mary Chain (along with the WTF Traci Lords song) all grace the film. There’s an unmistakable 90s vibe. To say it feels timeless would be…lying. Yet at the same time saying it feels dated is too harsh a criticism. Through and through it’s a product of its environment, and it that respect it acts almost of a horror timestamp of the cultural zeitgeist of 1992. Angry, grunge (Maine and Seattle are aesthetically tethered to one another), pre-punk, with Eddie Furlong driving the bus. 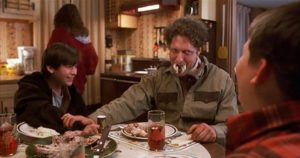 Trading off the original PET SEMATARY’s grief induced horror, we’re given more visceral scares this time around. Lots of great practical effects from a pre-CGI era, some decent body horror gross out stuff. If the original invoked feelings of sorrow and terror in the middle of the night on a desolate moor then SEMATARY TWO is all about blood spattered leaves on a fall afternoon. The skies are grey and there’s plenty of gore, and everyone is wearing flannel.

No more is 90s influence more evident in PET SEMATARY TWO than in its handling of the film’s antagonist; Clancy Brown’s Gus Gilbert. Gus is equal parts Jack Torrence and Freddy Krueger with his one liners and manic energy. The protocol surrounding the reanimated dead in this series is sketchy to say the least, turning Gus from a drooling zombie with a hard on one minute, into a scenery chewing, power drill wielding wisecracker the next. Does it matter though? At one point he runs a family off the road into a potato truck while Jesus and Mary Chain plays. The scene is punctuated with a severed leg in a pile of potatoes.

PET SEMATARY TWO is not a slow burn. It’s not an A24 character study. It won’t give you nightmares and it doesn’t announce a bold new voice in horror. It’s basically a horror movie made for teenage boys in 1992. But if you’re one of the minority on the internet that happened to be a teenage boy in 1992, it’s a really fucking fun trip down memory lane.