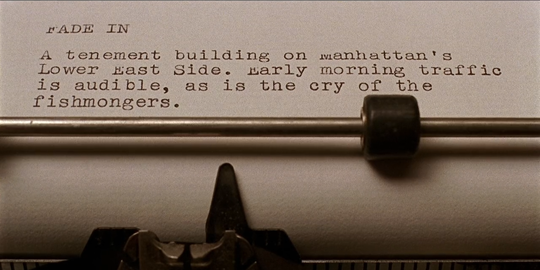 Writing!  It’s that thing we all love to pretend like we’re doing as we stare at a blank Word Document before giving up and checking our social media feeds for “inspiration” and then fall down a hole of distraction.  But some people throughout history have actually been known to produce things that other people read!  These are the folk we’re celebrating this week, with ten tales of writers, both real and fictional!

The hard-drinking life of Charles Bukowski is the focus of John Cullaghan’s documentary, which has a bit too much in terms of fawning fans (hey, Bono) but is still an engaging portrait of the poet and author.

Based on the memoirs of writer Christopher Isherwood, “Doctor Who”‘s Matt Smith stars as the future I AM A CAMERA writer who comes to Berlin in 1931 and meets a variety of folk, including poet W.H. Auden, in this made-for-BBC film.

A 1988 Spanish film released to the US years later (after star Hugh Grant became famous), this tale recounts the weekend spent with the future Mary Shelley, poet Percy Shelley and Lord Byron as Byron challenges his friends to write a horror story. Grant is Byron, Lizzy McInnerny is Mary, Valentine Pelka is Percy Bysshe Shelley and Elizabeth Hurley hangs around.

You know what the story of Mary Shelley could use? A wild, hallucinatory drug trip of a telling from the twisted mind of Ken Russell. Gabriel Byrne is Lord Byron, Natasha Richardson is the future Shelley, Julian Sands is Percy Bysshe Shelley and Timothy Spall hangs around. Bizarro fun!

George Romero’s adaptation of Stephen King’s novel about a writer whose psuenonym comes to life doesn’t rank with the director’s best, but it certainly has its moments, and features a fine dual performance by Timothy Hutton. With Amy Madigan, Michael Rooker and Julie Harris.

The trials and tribulations of screenwriter Dalton Trumbo, blacklisted by the House Un-American Activities Committee, are recounted in Peter Askin’s solid doc, featuring input from Joan Allen, Brian Dennehy and Donald Sutherland, who starred in the writer’s JOHNNY GOT HIS GUN.

She killed them all, you know. JUST LOOK AT HER.

John Turturro plays a screenwriter hired to work on a boxing film and gets a serious case of writer’s block in the Coens’ great flick that will truly show you the life of the mind. With a fantastic John Goodman, Judy Davis, Michael Lerner, John Mahoney, Tony Shalhoub, Jon Polito, and Steve Buscemi as Chet. That’s Chet.